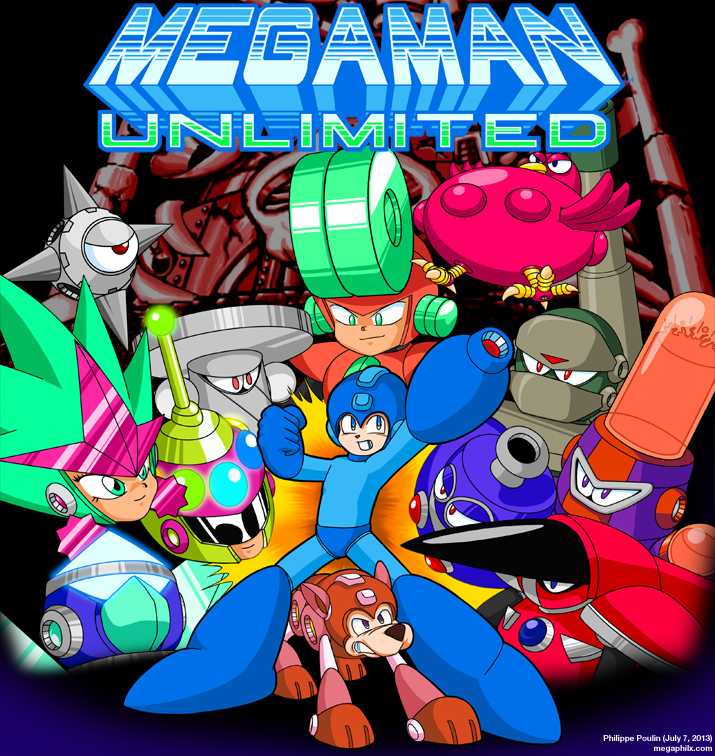 Back in 2009, I found some gameplay videos of a fake Mega Man 10, animated by Philippe Poulin, aka MegaPhilX. I was interested, so I kept an eye on the project. Four years and one name change later, the game was no longer a fake; it was Mega Man Unlimited. Like anything else, it wasn’t perfect, but it was, in my opinion, a well-designed fan game.

The first thing to note is the difficulty: THIS GAME IS HARD. It took me at least eight hours to beat it on normal difficulty. Even Easy mode is hard. I think most of the game is fair to the player, but some parts of the game are a little challenging.

Two of these parts were stages. Rainbow Man’s stage had an insane amount of (normally) insta-kill lasers. Wily Stage 3 had quite a lot of spikes and bottomless pits, along with changing gravity. I died in these stages quite a lot, forcing me to start over every time. Some bosses forced me to spam the E-Tanks, from Glue Man, who, ironically, hardly sits still, to the second form of the Wily Machine, which is fast and hard to hit with its weakness. Finally, the game ends with an unwinnable boss who strips you of your weapons before you have to escape from the exploding castle. That’s not the best way to end the game.

On the other hand, there were many things the MMU team did right. First and foremost is the game’s engine, developed by Gabriel LeBlanc (N64Mario84). It feels like a Mega Man game you’d play on Virtual Console. Mega Man himself controls very well, and they are very simple to get used to once you start. The graphics look great, as if it was on the NES. As always, you get a new weapon every time you take down a Robot Master (boss). All nine of these weapons are simple to use, well-balanced, and useful at someplace in the game besides bosses. You even need some weapons to access parts of certain levels, and you need to master using them like this to beat the Wily Stages.

One of the game’s best aspects, however, is its 8-bit soundtrack, which, aside from a couple songs, is completely original, composed by Kevin Phetsomphou (Kevvviiinnn), Yan Thoulin, and even MegaPhilX. Several of Phetsomphou’s pieces, in my opinion, rival the music of the official games. Highlights include Nail Man’s stage (Phil and Kevin), Yo-Yo Man’s stage, and Wily Stage 2.

If you pick up this game, I have some recommendations. First, use the quick-slide button. Second, beat Easy mode first. Finally, find the Yoku letters and unlock and play through Yoku Man’s stage. It is a hard stage, but the weapon you get from him will be worth it.

I heartily recommend this game. Download it for free at megaphilx.com, and give it a spin.