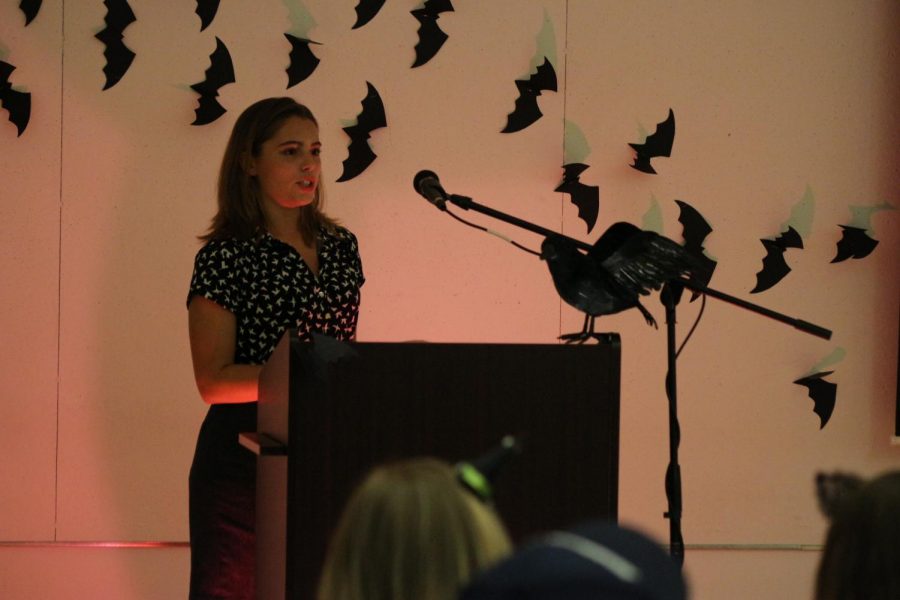 Jordan Redinger at the 2018 Creepy Conference.

The conference featured many speakers who spoke on a variety of spooky topics, with guests attending having the opportunity to participate in a costume contest. From mysterious disappearing flights to cult leaders, the Conference discussed both the very real side of horror as well as the ethereal.

Megan DiNatale, the president for the Sigma Tau Delta chapter, described the Creepy Conference as “a time where people come together to tell scary stories or something spooky that they found out or researched.”

This was exactly what senior Joshua Bednar set out to do with his presentation on the mythical Japanese legend “Gozu.” A story that, once learned, causes the listener to die. Bednar found out about the story while browsing urban legends online in his freshman year, and decided to submit a presentation on it for this year’s Creepy Conference.

“It’s a very obscure thing to know about,” said Bednar. “I’ve never heard anybody talk about that before so I knew it was going to be a unique thing to do.” When asked if the story truly existed or not, he responded “I think there may be a slim chance.”

Professor Sylvia Pamboukian has helped set up the event for the past 12 years. She received a lot of submissions for this year’s Conference, which unfortunately had to be narrowed down to only a few presentations due to time constraints. Professor Pamboukian looked forward to hearing and experiencing all of the presentations.

“Until tonight, I don’t actually get to see the whole (presentation),” said Pamboukian. “I’m really excited to see how people do.”

Along with students being able to share stories, some faculty also got in on the action as well. Dr. John Lawson dressed in a costume to share his story of “The Condemned.”

The story is about an experiment where a prisoner is beheaded to see if their decapitated head still holds consciousness despite being separated from the main body. His inspiration for the story was “want(ing) to know what happens if you get your head cut off, so I used my imagination. I have heard of experiments… with decapitated prisoners but they never (panned out).”

The entire Creepy Conference lasted about two hours and was a very entertaining and terrifying experience just in time for Halloween. I learned a lot about many scary subjects and their origins as well as heard some amazing original works. The event was definitely a scary experience that I’m looking forward to next year.