“Venom: Let There Be Carnage” Review 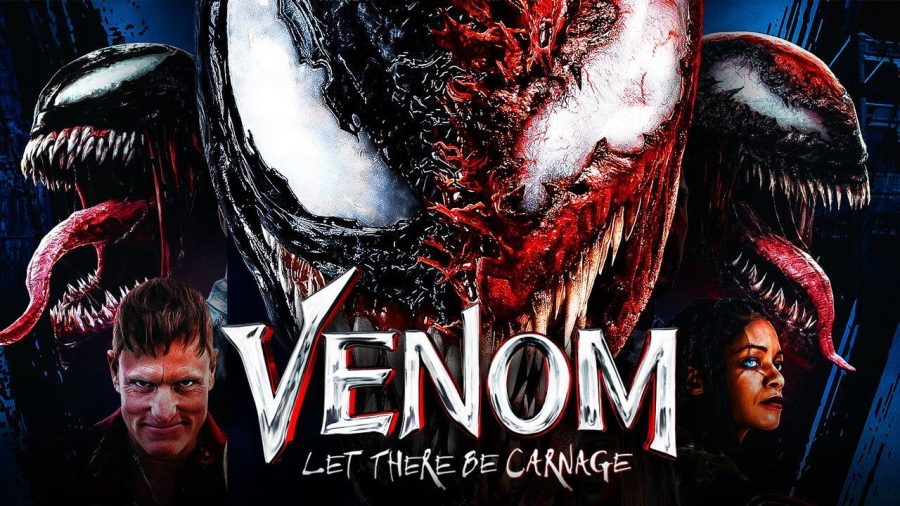 To keep my review spoiler free, I won’t give away any major plot points, and I will also include a section that has spoilers. First of all I believe that the movie was a good build off of the first movie, “Venom” from 2018, which was highly received. It also embraces the movie’s sillier side in the sequel.

In this second installment, we follow Eddie Brock (Tom Hardy), a journalist from San Francisco, follow up on a story of a serial killer, Cletus Kasady (Woody Harrelson), aka Carnage. Meanwhile, Eddie Brock is still struggling to coexist with the shape-shifting extraterrestrial Venom. Brock and Venom must put aside their differences to stop Kasady’s reign of terror. I believe the story has its ups and downs, comedic moments with Eddie and Venom, and is truly a love story throughout. According to Rotten Tomatoes, critics gave it a 60% saying it is aimed for fans, while audiences rated it an 84%. All and all I would rate “Venom: Let There Be Carnage” a seven and a half out of ten, and there is a can’t miss post-credits surprise.

And now on to the spoiler side of this review. To start, let’s jump straight to the surprise post credit scene. Venom Let There Be Carnage post-credit scene merges Venom/ Eddie Brock (Tom Hardy) with the Marvel Cinematic Universe in the upcoming Spider-Man No Way Home! This was confirmed when a multiversel shift happened while Eddie and Venom were laying low on a tropical vacation, and we saw the post credit scene from Spiderman Far From Home on a TV in Eddie’s room. This is a huge deal because now the Sony Marvel characters are now part of the MCU such as venom.

Now that the big news is out of the way, let’s break down the plot and story of Venom: Let There Be Carnage. In the beginning of the movie, it starts just a couple of weeks after the first Venom movie. Eddie is still trying to coexist with his otherworldly friend, Venom, and Eddie is trying to be a successful print journalist for the Daily Bugle in San Francisco. So, we then see Eddie follow up on the story of mass serial killer Cletus Kasady. Earlier in the non-spoiler section, I mentioned that this is a love story, and it is shown when a flashback of Kasady is shown in a school for unwanted children. At this school Kasady met his one Love, a girl named Shriek, who has the power of supersonic screams. Because of this they took her away, so as a result Kasady could never see her again.

We then move back to the present, and Kasady asks to see Eddie so he can print a cryptic title for Kasady. In exchange he would reveal where he hid all the bodies of his victims . While Eddie was there, Venom had done a quick search of Kasady’s prison cell and found out where the bodies were. So Eddie tells the city and it was true, so because of this the mayor opens the death penalty one more time to kill Cletus Kasady by lethal injection. Although, before he is set to die, Kasady wanted to speak to Eddie Brock one last time. Cletus started insulting Eddie and then Venom lashed out at Cletus which brought Eddie closer to Cletus’s cell. By this happening, Cletus bit Eddie and a small piece of Venom went inside of Cletus which then infused with his blood. This inevitably created another Venom-like being called Carnage.

So, when Kasady was about to be killed due to lethal injection, Carnage saved him and helped Kasady escape prison. In this escape scene, we were able to see Carnage for the first time and all of his scary abilities, so I feel this was one of the best scenes. Anyway, once Kasady escaped he was tracking down his old love, and when he found Shriek, he broke her out using Carnage. Although due to Shriek’s supersonic screams ability, we learn that those loud noises are one of the weaknesses of venom-like beings. This is important for later in the film. In the meanwhile Eddie and Venom get into a fight and split up. In the middle of this whole story we see Eddie’s Ex, Anne, from the first movie announces that she is engaged to her boyfriend Dan, who was also in the first movie. Because of this there is comedic tension between Eddie/Venom and Anne with Dan. Later on Anne finds Venom alone now inside of Mrs. Chen, who is a returning character, and brings him back to Eddie. After this, is one of the funniest parts of the movie with Eddie apologizing to Venom through Anne. Eddie and Venom then try to stop Carnage/ Kasady who is trying to get married to his love Shriek like he always wanted, but he must be stopped because Kasady is extremely dangerous, especially with Carnage. This then breaks into the final fight of the movie which is very creative with its location of a church. In the end Eddie/Venom use the giant church bell to separate Kasady from Carnage with the loud ringing of the bell, and then Venom eats Carnage before he can rejoin with Kasady and finishes off Kasady by killing him finally. With the police on to Eddie and Venom again they decide to go lay low on a tropical vacation to end the movie. Then the post credit scene I described before unfolded.

All in All, I enjoyed the movie and I liked the comedic bits with the action of Venom and Carnage. I will still stick with my rating of 7.5 out of 10, and I will say that if you enjoyed the first Venom movie, like I did, then you will definitely enjoy this second instalment of the series. Plus I can’t wait to see what the future holds for venom and the MCU.