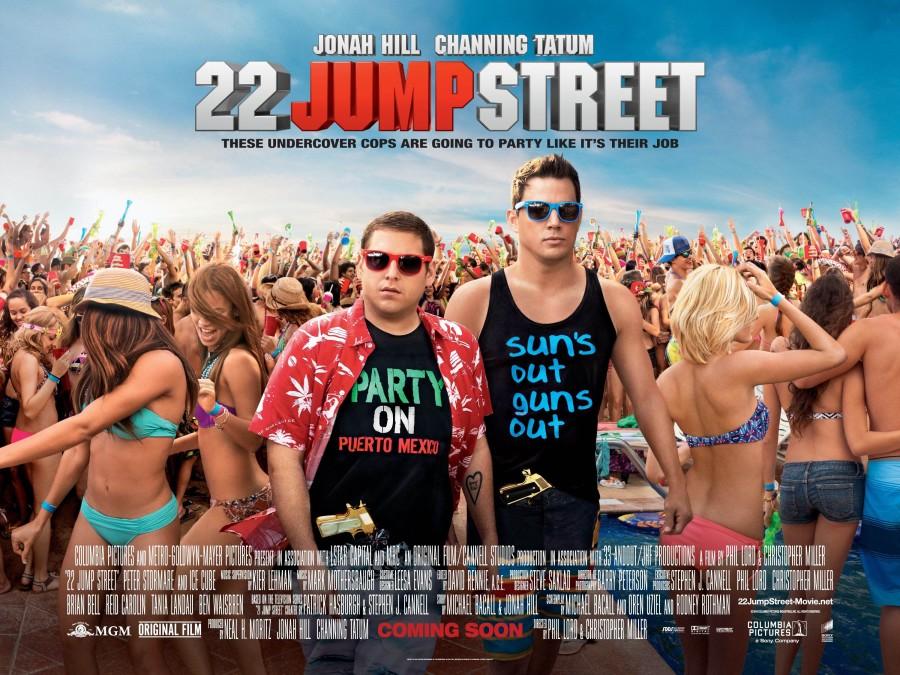 I’ll be the first to say it. Sequels have a tendency to turn out bad.  I don’t want to make any sweeping generalizations here, but sequels usually take everything you love about a first movie and mangle it with overly simplified, highly formulaic stories that make characters that once seemed so original, nothing more than Hollywood puppets. It’s a sad but true trend that has only gotten worse recently, a fact that leaves many movie-goers with a knot in their stomach when the words, “follow up” arise. Such fears were naturally  aroused when a sequel to“21 Jump Street” was announced, aptly named, “22 Jump Street.”

Based off the popular 80’s TV Show of the same name “21 Jump Street” burst on to the big screen in 2012. Instantly loved by audiences everywhere, Jonah Hill and Channing Tatum had an on-screen chemistry that bested just about any buddy-cop movie out there. They were young, they were hilarious, and their antics made for some classic entertainment. The two came together in a tour de force so popular and so lucrative that you had to figure it would receive a sequel.

That was a scary thought to some though, myself included. I loved the first movie, I enjoyed everything about it, so the last thing I wanted was for there to be a sequel that turned the whole thing sour. Could they pull it off? Could they strike comedy gold two times in a row? Could they really make a sequel that would hold its own against the original? . . . It turns out, they could.

But the thing is, this really isn’t a sequel. I’d even hesitate to classify it as such. Why? Because it’s the same exact movie as before. And I’m not talking about “It had some similarities.” I’m talking “Hangover 2,” same exact movie here. Don’t let the analogy get you down though. I promise you won’t be disappointed with this copy, and there’s more than a few reasons for that.

First, “22 Jump Street” never takes itself too seriously, and never pretends like it’s trying something new. In fact, throughout the movie, they really, really play up the fact that this is the same exact thing all over again. Multiple times, you’ll even hear “Just do the exact same things as before,” and believe you me, they do.

The second reason the whole sequel, but not really a sequel story works so well here has to be Jonah Hill and Channing Tatum themselves. They’re on screen chemistry rocked in the first movie, and it rocks throughout the second one too. This time around Channing Tatum gets to be the more popular of the two “McQuaid” brothers, while Jonah Hill is left to be the awkward outcast who gathers information through a band of social misfits. It’s a role reversal that does shake things up slightly from “21,” but not enough to warrant any real differences in the story arc.

The third reason this movie turned out so good, and what I believe to be the most influential reason, would be the return of directing pair Phil Lord and Christopher Miller. Hot off their last cinematic adventure, the ever-popular “Lego Movie,” Lord and Miller returned to “Jump Street” one more time to mold the story audiences everywhere were hoping for. I’m always impressed with what this pairing has to offer, and “22 Jump Street” was no different. Part of me wonders if these movies aren’t Lord and Miller’s way of projecting themselves and their own adventures on the big screen. That may be far-fetched, but a small part of me hopes it’s true.

The fourth and final reason would have to be the running gags and quality laughs provided throughout. Am I alone when I say that my favorite thing about the first movie, and subsequently my favorite thing about the second movie are the dancing montages with Hill and Tatum? Yes? No? Maybe? I can’t help but crack up every time some ridiculous song comes on and they start grooving. Also supplying plenty of laughs throughout the movie was Ice Cubes expanded role as the chief. While being a somewhat minor part of the first movie, Ice Cube gets plenty of screen time in this go-around, and its worth every second. His overuse of swear words and the facial expressions he makes throughout really do become a comedic highlight.

Overall “22 Jump Street” made for a very successful follow-up to its predecessor. Playing off the high points of the first movie, its ability to make fun of itself and the entire sequel culture made it a refreshing return to a story we had already seen. It’s the perfect movie to see with your friends, or while on a date. Channing Tatum and his tendency to be shirtless will satisfy the ladies, and the action and dirty humor will make it entertaining for the fellas. It’s really the perfect movie for college kids, but I guess it should be. After all, the whole thing does take place at a university.

Have you seen “22 Jump Street?” Do you think it held up to the first movie? Let me know what you think in the comments below!