Sentry Around the World – Living In Washington D.C. 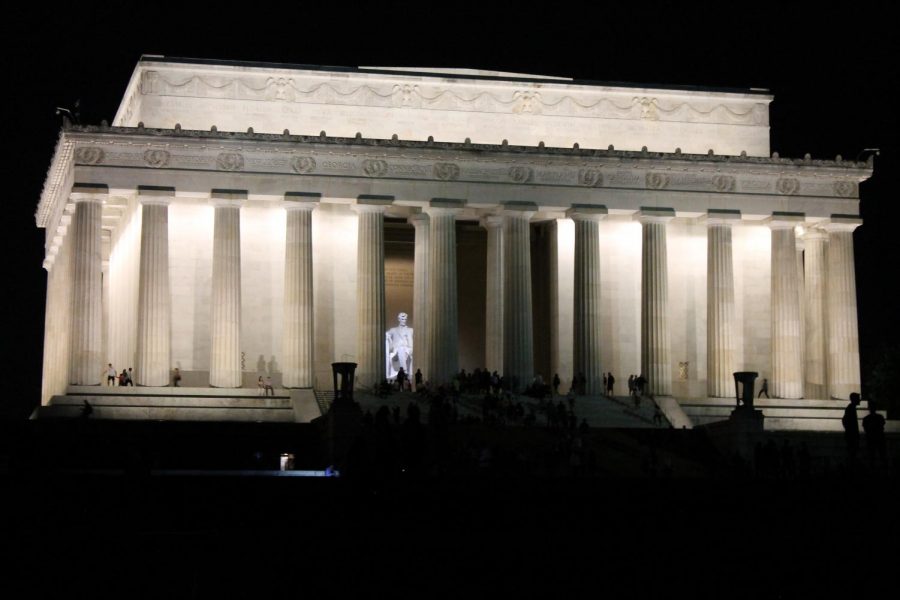 The Lincoln Memorial lit up on a night walk Photo credit: Jordan Redinger

WASHINGTON D.C. — I do not think that I fully realized I would be working at the National Air and Space Museum (NASM), the most popular Smithsonian and not to mention the third most-visited museum in the world, until I walked into my first day of the internship.

The walk was literal; I decided to trek the entire two miles across the National Mall to work that day. That walk taught me my first lesson about Washington, D.C.: even if you are in a dress, wear sneakers everywhere. I biked every day after that first walk. Even though my feet were upset with me, I do not think anything could have brought me down that day. The second I walked into NASM, hours before it opened, I knew that I was in the right place.

Museums have always been a comforting place for me; I find both joy and peace in them. It reminds me of being a kid, just waiting to see what new treasure is around the corner. In the hours before opening, NASM is a haven.

Sunlight streams through the big glass panes of the front of the building, settling on the myriad of planes, rocket, and space modules on display. On a break, I took the opportunity to walk around the main floor of the museum, soaking in the quiet anticipation of the day to come and just letting it sink in that I would be there the whole summer, having moments just like that one.

About an hour before opening, the quiet buzz becomes louder as the museum is literally brought to life. Displays are lit-up, sound checks are run on audio tours and interactive displays. Docents begin to congregate at their station, testing their mics, the stores are opened and the IMAX theater begins to rumble with a test run. Then the museum opens, becoming a swarm of humanity, parents and children alike rushing through the doors. There is no feeling like being a part of those rare moments of transition.

As much as I loved being at the main museum, my internship was with Collections at the Paul E. Garber Facility in Suitland, Maryland. The Smithsonian Museums have such vast collections that they cannot be kept at the actual museums themselves, so they create collections facilities such as the one in Suitland that is home to the collections of Natural History, American Indian, Air and Space and American History.

NASM was the first to create their storage facility with Garber, a series of 32 warehouses that house anything from Caroline, JFK’s personal plane, to spacesuits and space food. It used to also house the museum’s restoration shop as well as archives. All of that is changing now as NASM begins a project that will take decades to complete, moving all its collections to the museum’s secondary location, the Steven F. Udvar-Hazy Center in Chantilly, Virginia. This location is best known for displaying a massive collection of planes as well as a space shuttle. Behind the scenes, Hazy is a state of the art storage facility.

My internship was to help with this Garber Move Team. I started with artifact condition reports on things like space helmets and space food. Make no mistake, as interesting as this was, it was far from glamorous.

Space food, though vacuum-sealed, can cultivate an odor as it ages. Additionally, most of it looks like dry vomit, especially the Canadian bacon with apples. Even less glamorous, but amusing, was my summer project: surveying and cataloguing a collection of “motion discomfort containers.” This is simply a euphemism for barf bags, the little bags people are given on flights in case they get sick.

None of them were used, thankfully, and they were donated by an aviation enthusiast who, along with his friends, had collected these containers during the ‘60s and ‘70s. The collector had gotten them signed by crew or written flight details on them. The containers come from all over the world, from Japan to South Africa and from Soviet Union Russia to India. It was one of the most unique projects I have ever worked with.

With the intern project completed, I got to pursue other types of collections work. I spent a large majority of my time with photography. The Smithsonian Institution is the world lead on digitalizing its collection, a new concept in the museum field. Only about two percent of NASM’s collection is on display; this is the largest percentage out of all the Smithsonian museums. In digitalizing their collections, artifacts that will never be displayed can at least be seen by the public if not used for academic research.

In my time with photography, I worked with a photographer who eventually became a mentor for me. Not only did he challenge me to think about how I was photographing artifacts, but he inspired me in my own photographic interests. I learned so much more than just photography, and I will forever be grateful to him for that.

During my time in collections, I got to do a multitude of other interesting jobs. I was given a bedraggled space suit from the Gemini era and told to prepare it for transportation, which primarily consisted of stuffing it. It was a difficult task, taking several days of planning before completion.

Additionally, I trained on the forklift. It quickly became a favorite activity for us interns; if it involved driving a forklift, we were all-in. I also got to take multiple tours throughout the warehouses to see collections and take pictures.

The caveat with taking pictures was that we cannot share or post them. A lot of the artifacts kept in collections, especially the space era ones, are kept private by NASA. I also visited Natural History’s Anthropology collections and saw perhaps one of my favorite artifacts of the summer. They have Sitting Bull’s rifle that he turned in when he surrendered to the U.S. government.

I did more than play with artifacts all summer though. Every weekend, I would become a tourist. It had been several years since I last visited D.C., and I took full advantage of my free time, getting to know the city and its culture better. This involved a lot of walking; my record for one day was 18 miles. I took night walks with my camera, capturing how the sun fell over the monuments, enjoying how everyone maintained a hushed and awed silence as they took in the views.

One of my favorite night walks was the night of Apollo 11’s 50th anniversary celebration. NASM’s director pushed until she got a law passed so that the museum could display a full-sized Apollo 11 on the Washington Monument, complete with a simulated launch and moon landing. I remember walking to the show and seeing the rocket projected on the monument in incredibly sharp detail but also seeing rapid heat lightning streaking the sky in hues of purple behind the monument.

My favorite place in all of D.C., however, was not on the National Mall; it was the National Zoo that stole my heart. I took the quick Metro trip there for the first time on July 4 in order to avoid the festivities going on downtown. As soon as I arrived, I knew that it was going to be my little haven.

Completely surrounded by a thick wall of tall plants, the National Zoo is a wild place in the heart of a busy city. A Smithsonian, the zoo works to curate a collection of animals that are not typical to the average zoo; their whole focus is in conservation. Many of the animals in their care, at the zoo as well as their research farm, most people have never seen before. Famously, people visit to see the giant pandas, but they also have animals such a sloth bears, red river hogs, clouded leopards and fishing cats.

The zoo also works to enrich the animals with activities, treats and scents to stimulate them and allow the animals to show their true natures, even the violent side. The sand cats were given live mice to catch, and they threw a rabbit in with one of the tigers. You can imagine my childish delight at having the opportunity to photograph and observe this.

No experience, however, can top hearing a lion roar. If you go to the zoo very early, and the zoo’s big male lion, Luke, is just being let out, he opens his day with a bellowing roar. It is a chilling sound, one that you will never forget or want to hear while alone in the dark; I fell in love with Luke that day.

In my succeeding trips to the zoo, I would go immediately to his exhibit just to watch his massive body, covered in scars, climb to the top of his exhibit and just roar. It would often set off the tigers to chuffing and the lemurs to hooting. The sea lions would then start up, and if you listened carefully, the bald eagles would scream. You can understand why I love the zoo, and the animals in it, so very much.

Every weekend I checked off things to do. I went to Arlington Cemetery and saw the changing of the guard. The interns took a day trip to Mount Vernon as well as the National Arboretum to take pictures with the columns that were initially built for the capital. I took a tour of the Library of Congress and got to see one of the Gutenberg Bibles and Thomas Jefferson’s library.

The 50th anniversary of the Apollo 11 moon landing show gave me chills. Watching the Fourth of July fireworks from the Jefferson Memorial steps overwhelmed me and the new fossil exhibit at Natural History reminded me of my childhood and why I love museums. I finally solved the mystery about what was inside the Smithsonian Castle; it is a small exhibit on the history of the Smithsonian. I also made the mile-and-a-half uphill hike to the National Cathedral and discovered it was so worth sore legs.

This past summer, I took more pictures than I will ever be able to share. I had even more moments where I just stopped and took it all in. I met so many people that, despite having to deal with tourists all day, were the most pleasant and welcoming people. I tried new cuisines and I learned more than I could have ever anticipated.

Working for a Smithsonian has opened many doors for me, making things I never thought would happen for me possible. Moreover, I learned that I can be completely alone in a big city and absolutely thrive. It was a summer of growth.

The biggest takeaway for me, however, will be the words of my photography mentor. During one of our talks, he looked at me and said, “Jordan, in life you just gotta do what moves you and hope that one day it will move someone too.” That stuck with me. This is my last year at Robert Morris University and I fully intend to spend it doing what moves me, what brings me peace and joy, much like what this summer gave me.