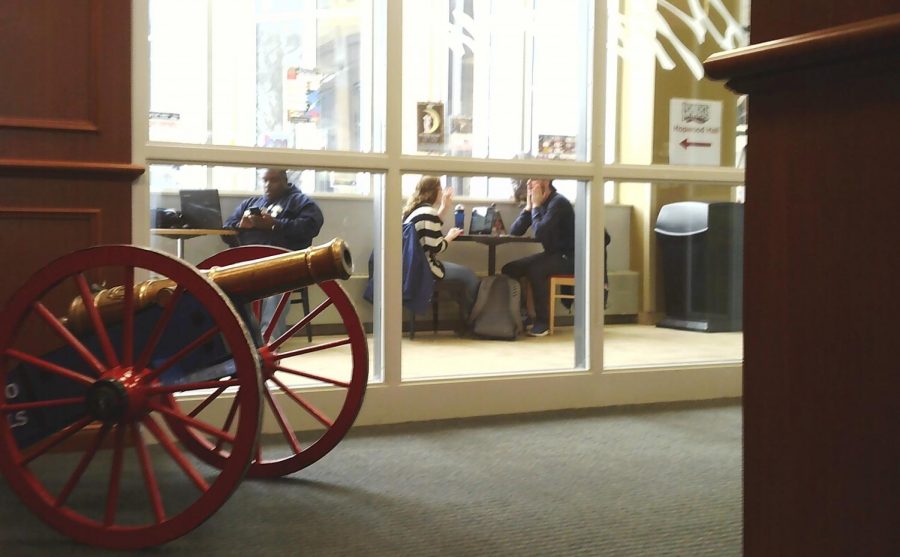 MOON TOWNSHIP — Most students of Robert Morris University walk by the Heritage Room daily, yet many do not acknowledge it. Few students know its location and those aware of where it is believe that it is only a meeting room.

“I know it’s where they store the cannon that they shoot at football games,” said Sean Strain, a history major at RMU. “I do know, from people that have been in here, that they have a lot of cool old books. I don’t really know anything aside from that.”

The RMU Heritage Room is a small preservation of the university’s connection to the Revolutionary War.

“They talked about what it should be, and they decided that it would be a fitting place to remember the heritage of Robert Morris,” said David Jamison, a professor of communications with a degree in history.

The heritage of the man named Robert Morris is infamous around campus. If students know nothing else, they know that he was one of the founders of the Revolutionary War.

“He’s more significant to the era than the war itself,” said Daniel Barr, an associate history professor at RMU with a degree in early American History. There was a huge problem with funding and equipment throughout the war, and Morris was the head of a couple committees that used foreign countries to supply and fund the Revolution.”

Inside the Heritage Room is a small plaque that remembers Morris for being one of only two founding fathers that signed the Declaration of Independence, as well as the U.S. Constitution and the Articles of Confederation.

“That’s why they took his name when it was initially a business school,” said Barr. “He was the business man of the Revolution.”

However, there is more to Morris than meets the eye. Historians remember Morris for more than just his signature.

“He was the head of the Continental Navy, and he built and ran it,” said Barr. In addition, Morris was a merchant and was heavily involved in import and export trade.

Inside the Heritage Room are three separate picture frames with various historical documents which Morris signed. The documents serve to remind campus who he was as both a business man and a person.

One is the original deed for the revolution, that Robert Morris signed on April 17, 1795. According to plaques that go along with the display, the deed was countersigned by James Marshall. The son of Marshall later went on to marry Morris’s daughter.

The second document is a Power of Attorney signed by Morris in 1793, and the third piece is a letter from Morris to Robert Gilmor & Co., a shipping company Morris partnered with, about the charter and late arrival of cargo from a ship called “The America.”

All these documents were donated to the university by a now retired professor, Professor Paper, who collected documents and memorabilia that contain Morris’ signature.

Another interesting piece inside the room is the bronzed likeness of Robert Morris himself that sits atop a four-foot wooden pedestal against the wall. It’s a replica of a full statue that stands in Independence Mall in Philadelphia.

“The original statue was done by a famous sculpture, Paul Wayland Bartlett,” said Jamison. “About ten years ago, the president of the university got a call from the family of the sculpture.”

The family collection which Jamison was referring to is the Tudor House Gallery and Museum in Washington D.C. At the time, it was giving away some of the artifacts that had been collected over the years.

“Bring me back the head of Robert Morris,” said Jamison with a chuckle as he recalled the orders he and a colleague were given before their trip to Washington D.C.

This plaster study was preserved by Michael Belham of Carnegie Mellon University, who put a wash on the plaster so that it looks bronzed.

“It was a way of having a visual, a visible reminder for us of who Robert Morris was,” said Jamison.

Little do visitors know, however, what else came back along with Morris’s head that day. It lurks in the cabinets of the Heritage Room.

“We’ve got the head and the arm,” said Jamison. “If we ever have the right funds, I thought we could display it in some way because he did sign all the documents.”

Additionally, there is a slowly growing collection on the shelves of texts on history.

“I began to think that maybe we should have some historic volumes in here,” said Jamison. He and several other donors have already given several collections of texts to the university. “I’d like to see it used as a reference collection for people.”

The university is fortunate to have the Heritage Room display, no matter how small, to tell a little bit of the university’s history that is so deeply entwined with the revolution that created this country.

“There’s value in knowing the history of the school and its evolution over time,” said Barr.

As RMU continues to grow as a prominent university and bring sin more donors, the Heritage Room collection could grow too. That would give students the opportunity to learn more about their university’s past and namesake.

“I feel like the common student is not demanding a history of the university, but if it was there for them, they’d utilize it,” said Strain.