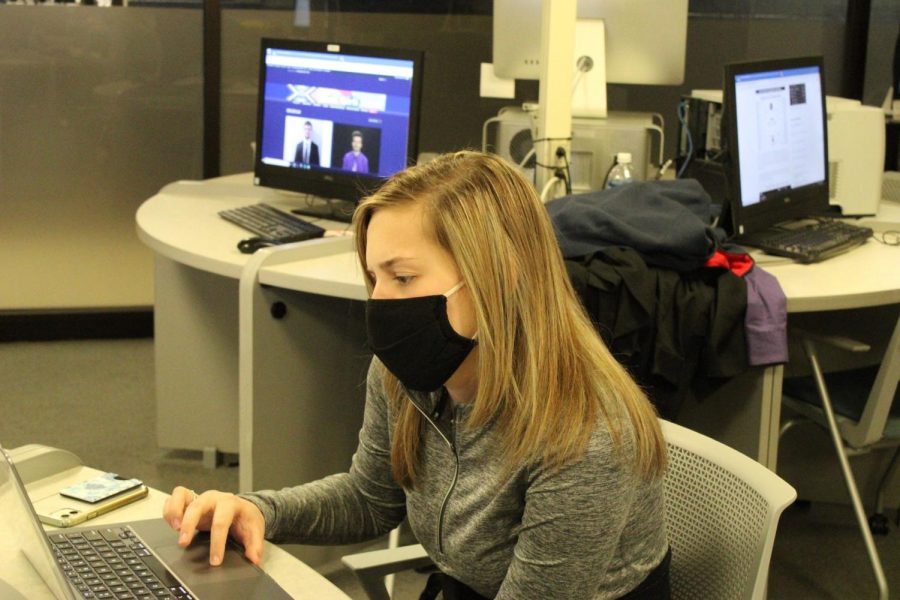 When watching, listening, or reading about sports, it is easy to notice the heavy male presence amongst the journalists. Since the dawn of sports coverage, it has been mainly male-based for the people who bring others their daily sports news. Although there have been strides to welcome more women into the sports media industry, there is still plenty of work to be done, and freshman Anna Milyak is hoping to pave her way into the sports scene.

As the movement to add more women in the sports world increases, Milyak notices the disadvantages for women in the field but wants herself and others to receive more respect.

“In the sports world in general, [women] are always looked over, and no one wants to take our input for what it was,” Milyak said. “Towards the end of high school, when I started to get more involved, people realized I did know what I was talking about, and I was credible.”

“I had to find a way to continue to stay involved, so I became a manager for our baseball, football, track and basketball teams,” Milyak said. “I enjoyed doing baseball and track statistics and filming for football.”

Along with participating in high school sports, Milyak has been an avid fan of the Pittsburgh Pirates as her family has held season tickets dating back to when they called Three Rivers Stadium home. Not only has Milyak showed her fandom by attending the ballpark, but she has also taken the opportunity to write about her favorite sports team.

Through connections she has made at PNC Park, Milyak has joined other female writers to display their sports passion. One of the blogs Milyak contributed towards was “Ballpark Vibes,” where women showcased their love for baseball by writing about breaking news, reviews and other noteworthy stories.

Continuing her passion for working in the sports world, Milyak enrolled at Robert Morris University after attending a “day in the life” with Associate Professor of Communication, Dr. Anthony Moretti. During her tour, Milyak witnessed behind-the-scenes work done by RMU Sentry Media as well as viewing RMU-TV’s “Sports Talk in the Burgh.”

After touring the Academic Media Center, Milyak took the opportunity to attend the Sentry Media retreat, where her interest in sports media increased.

“I met people here that I wanted to continue to hang out with,” Milyak said. “We did some things that seemed interesting, so I figured I’d keep coming and give it a shot.”

Since her start in Sentry Media, Milyak has developed into a writer for Colonial Sports Network, along with making and running graphics for various RMU-TV productions.

While Milyak works towards her future endeavors, many women have inspired her throughout her life, including several close family members.

Using her aunt and grandma as inspiration, Milyak believes that it is necessary to celebrate Women’s History Month to shed light on the hard work that women do and to show the respect they deserve.

“I think that it’s important because it is often overlooked and overshadowed as people do not get enough credit for the work that they do,” Milyak said.