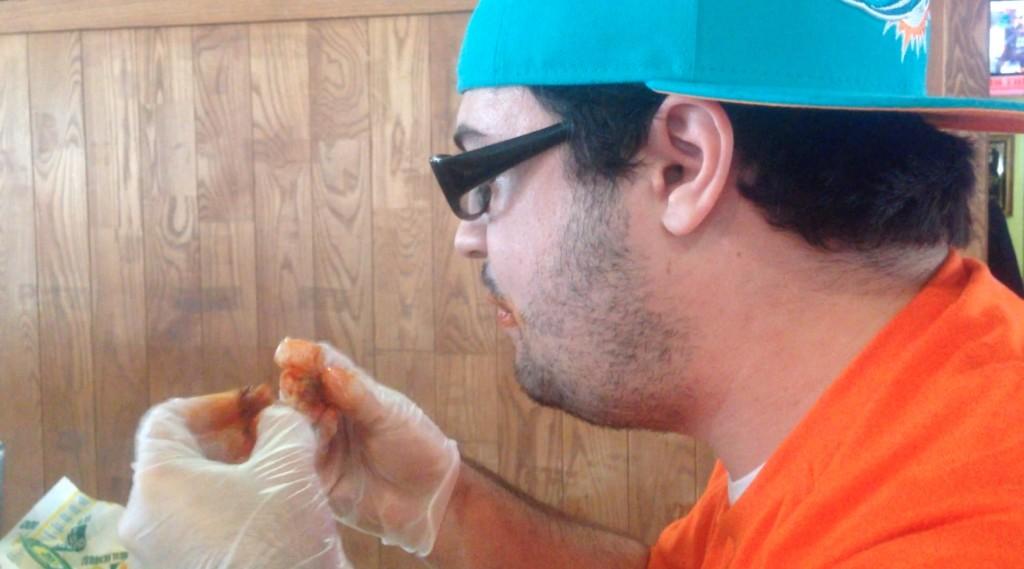 I’ll be laying something completely new on your plate this week . . . literally. Like pretty much every other person I have ever met, I love to eat. I especially love spicy food; hot wings in particular. So when one of my friends brought up attempting to do the wing challenge at Quaker Steak & Lube, I was all in.

Here’s an overview: 6 Triple Atomic wings (the hottest sauce possible), no time limit, and as much water as I wanted. Piece of cake, right?

We arrived at the restaurant, where our menus lay on the table waiting for us to order. I glanced through it, and became a bit reluctant to do the challenge. Thoughts began rushing through my head . . . “6 wings is nothing to me, I haven’t eaten all day”, “500,000 on the heat scale . . . that’s a lot”, “I really don’t want to see the aftermath of this.” Regardless, I was convinced to go through with the challenge.

I’m going be honest; I talked a big game beforehand. I thought this was going to be an absolute breeze to complete. My assumptions would have been accurate if this breeze were coming from the inside of a burning building.

The waitress brought out our meals, and the challenge was about to begin. Cell phones surrounded me to capture the action from every angle (thanks guys). After putting on my gloves to keep the sauce out of my terribly bitten fingernails, I dug into my first wing.

The first bite wasn’t bad at all. The sauce was actually really sweet. By the time I had finished the wing though, it hit me; these wings are really hot! I powered through the second wing, and by the third wing, I began to sweat.

Me mouth on fire . . . me mind on fire . . . feelin’ hot, hot, hot. I was only halfway done. I tore into the fourth wing and my eyes began to water. This was easily the worst part. Though, there was no doubt in my mind that I was going to come out of the challenge victorious. I began to hear “Renegade” by Styx play in my head. It was time for the big play, the game changer.

It was over. My face was on fire as I wiped off all of the excess sauce that burned my lips. Sweat poured around my eyes. In under a minute, the challenge was officially in the books: Matthew 1, Triple Atomic Wings 0.

This was by far the hottest thing I have ever eaten. My mouth didn’t cool down until about a half hour after I completed the challenge, and that was after eating the ice cubes out of my glass. I now know that ghost peppers mean serious business.

The challenge was essentially two minutes of fiery hell, a delicious hell, nonetheless. At the end of the day, I was glad to know that I had conquered the famous Triple Atomic Wing Challenge.