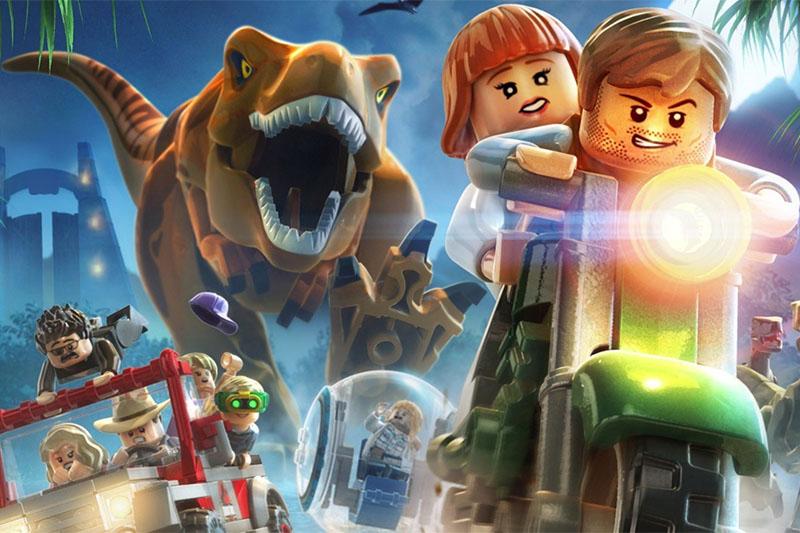 Lego Jurassic World is one of the best Lego games that I have played in a long time. I had more fun with this game than I have with most games of the past year. The story of Jurassic world follows the films, but it has a funny Lego take on it. This game includes all 4 films from the franchise. If you have seen the films then you know the story; Lego doesn’t add anything new to the stories so don’t expect them to build off the films. That said, Lego has taken the scenes from the films and has made them more comical for a larger audience.

Jurassic World has a large open world map where you get to explore the locations from the films. You are able to explore the two islands that appear in the four films and collect gold pieces. The gold pieces are attainable from completing the main missions and exploring the islands. Scattered throughout the open world are terminals that once you have enough gold bricks you can spawn dinosaurs. There are 5 playable dinosaur types in the game sea, air, small, medium, large including the T-Rex, the Spinosaurs, and the Indominus-Rex. There are also vehicles that you can unlock by playing the main missions.

The main missions are taken right from the films, there are 5 missions per film. In total there are 20 missions for you to play. The missions are set up so that you always have two players on the screen. The whole game is playable with another person. In order to collect everything that a level has you need to play the level again on free play. Free play allows you to replay the same level, but play as any character you want. This allows you to reach harder to reach spots and get things you may have missed the first time through.

The game has well over 50 playable characters for you to choose from. Each character plays differently and has something unique that others don’t. If you don’t like any of the characters that the game offers you can create your own character to play as in the game. This character is playable in all missions while in free play mode. This game also has a feature that is unique to it in that you can make your own dinosaurs. You are able to take a base dinosaur and make modifications to it that change how it looks and what it can do such as a raptor with the roar of a T-rex.

This game has a lot to offer people with all its content and funny takes on the films. That is why I am giving this game a 8.75/10. It’s a very good game that offers a lot to its players and always has something for you to do next.

Pros: Play as a dinosaur, Make your own character, A lot to collect, A lot to explore, Visit locations from the films, Playable with a friend, This game has cheat codes!!!