The traveling sports fan is among the unique figures in all of professional or collegiate athletics.

The traveling sports fan is one of the most unique figures in all of athletics, whether collegiate or professional. Driving, flying or even cycling to an event (yes, that’s real), in order to see their favorite team doesn’t stymie the hardcore sports fan. In fact, miles or kilometers are only a motivating factor to go even higher and further.

Two years ago, Kentucky opened up their championship arms to the Robert Morris Colonials in a much-anticipated rematch after the infamous NIT First Round game in March of 2012. RMU played spoiler in that matchup, but the rematch several months later played right to Kentucky’s strengths. The Wildcats won the sequel, 87-49.

“I think at Kentucky, there was an awe-factor there. Coming off the victory [against Kentucky] a couple months prior to that, going down there, they were out for blood,” said long-time Robert Morris fan Michael Jandrasits

Today’s matchup against Georgetown proved to be another huge test for the Colonials; a Northeast Conference battle-tested squad against a perennial Big East contender. In the rafters of the Verizon Center, Georgetown showcases five Final Four appearances and a 1984 National Championship. RMU cannot express the same accolades.

One thing remains consistent despite the losses to destructive forces like Kentucky and Georgetown; Robert Morris fans travel despite the differences.

The Verizon Center in Washington D.C. is 264 miles away, or for those that listen to their GPS, four hours and 22 minutes. From 6001 University Blvd in Moon Township, PA to Rupp Arena in Kentucky, it’s 374 miles away or five hours and 42 minutes away. Let the record also show that RMU fans don’t fly; they drive.

Why do they travel? Why do they continue to follow the team they love wherever they go? For the die-hard Colonials fan, that’s truly an easy question to answer.

“I think they have a strong following in that they’ve shown over the last couple years, that they’ve been able to play against really good competition and compete,” said Eric Hendershot, a tried and true RMU basketball fan.

After going into halftime facing a 36-24 deficit, the Colonials were at a disadvantage. Georgetown has one of the richest-basketball histories in the NCAA. Robert Morris went to the NCAA Tournament a few times, but aside from those magical years, the extraordinary history is limited.

The causal fan may consider the game over and leave to beat traffic. Nobody wants to be in wall-to-wall traffic after a sporting event. They’d rather miss the ending of a great game than waste the gas in this economy.

Georgetown opened up the second half with a 17-5 run in the first six minutes, putting their lead to 24. At that point, a lot of basketball remained. However, the Hoyas continued to put the pressure on Robert Morris. 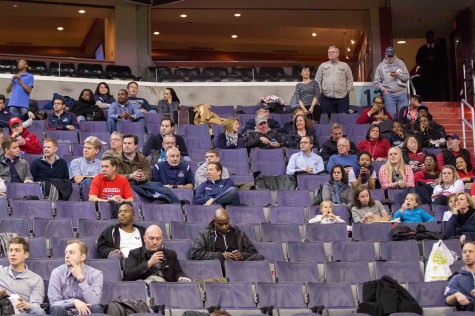 RMU continued to battle until the final buzzer rang throughout the Verizon Center. The final score read Georgetown: 80, Robert Morris: 66. The failure to capture the victory didn’t harp the spirit that Head Coach Andy Toole exuberated on the sideline. No matter the score, Toole’s bunch plays from whistle-to-whistle. The fans know that and revel in that line of thinking.

Passion is infectious, as proven by the Robert Morris Colonials basketball team. If the fans are rowdy and rambunctious, the players feed off that energy. The same feeling is reciprocated for the fans, as success may dictate their energy level, although, that’s what makes the Colonial Crazies so special. Their love for the Colonials never dissipates.

RMU basketball fans will continue to travel onward for away games. Distance has no bearing on a love for the team, even if they have to drive there.