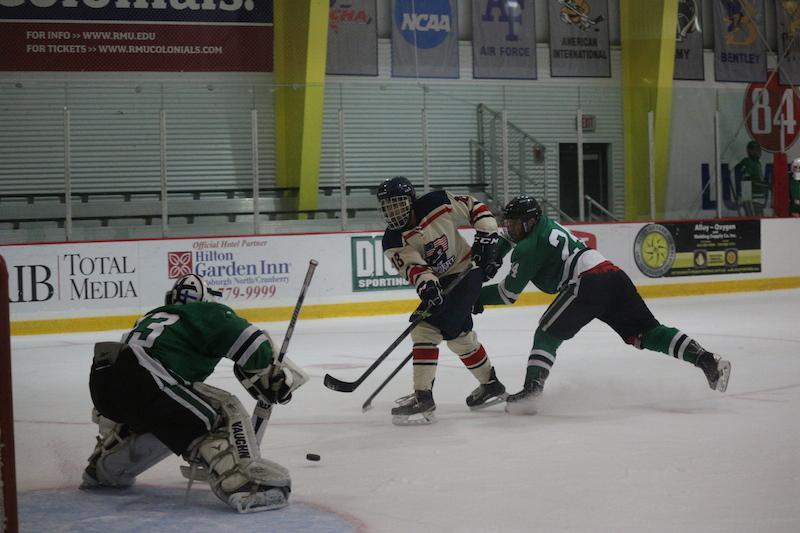 After a short break in conference play the RMU ACHA DI hockey team hosted Slippery Rock University Friday night. The team came off a one win weekend against RIT.

“Our practices were a lot more intense than they usually were, usually we’re kinda slow,” said Dallas Savoy. “This week we kind of came out fired up and ready to go.”

The first period ended with the Colonials being up 1-0. SRU’s Sage Strezeski took at tripping penalty at 9:41 and Travis Reece would send a pass to Justin Rehrer putting RMU on the board with a powerplay goal.

The middle period would start with a Colonials’ goal with Luke Chiala scoring a little over a minute in. Nick Fischer would capture the assist on the goal. A little 4-on-4 action would happen and SRU would have a brief 5-on-3 but would come up empty handed. Savoy and Mason Krueger would add two more to the board, but SRU would cut the lead by 3 goals by the time the period came to a close.

“Biller [Cody Brightbill] gave me a beautiful pass,” said Savoy.” I saw my opportunity and just put it high glove”

The final period proved to be similar to the first. Savoy would be the star of the night with his second goal coming with about 6 minutes remaining in the period. Shortly after the final goal the Colonials would find themselves down a defenseman with a few minutes remaining when Raymond Rose and Slippery Rock forward Thomas Kimmick both received 10 minute penalties. When all was said and done the Colonials would take a 5-1 with them.

“I think in game we just tried to get back to what we stress to the guys,” said Conrad Waite. Which is play simple, play defense first, take the body. Our speed normally separates us from a lot of teams so if were doing everything else well that exasperated.”
The team will be traveling to Penn State University today to take on the schools DII team in the new Pegula Ice Arena. Puck Drop is scheduled for 10:45.