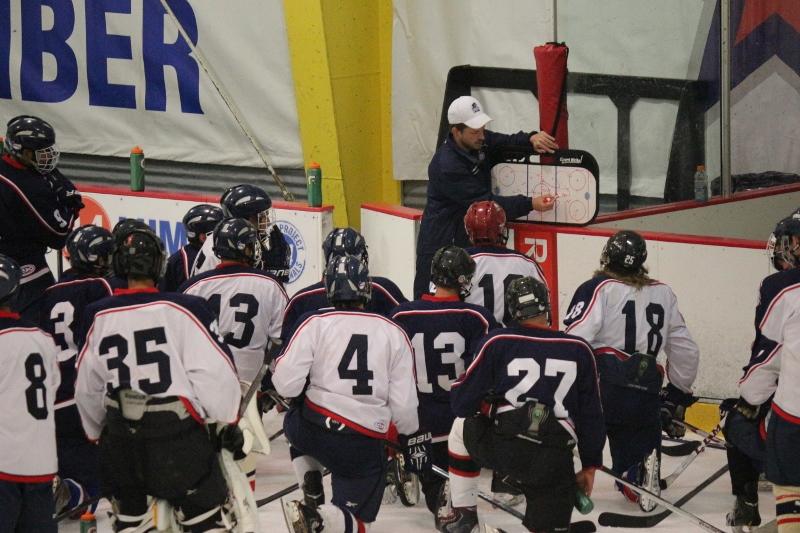 A new season is about to unravel for the RMU ACHA DI hockey team. With a new season comes new teammates, opponents and some familiar faces to the staff.

This season the team will be without some of their key players from last year including Wes Heinle, James Joyce and goaltender Ryan Gayso, who the team lost to graduation. The team also lost Alex Dagnal, who will be the joining the RMU NCAA Men’s hockey team for the upcoming season.

“We lost a lot of leadership, and the front end of our roster we lost all of our captains pretty much,” said assistant coach Conrad Waite. “ So we’re looking to fill that from within, and then we’re looking to get better every year so we’re looking for freshman that can play the way we want to play and fit in well with them, the team.”

The open spaces were filled after an intense week of tryouts held during the first week of classes. The group put their skills to the test and by the end of the week the coaching staff had a roster in place. Filling 14 spots with 12 new faces and two players who previously played for the club. With the new players added to the roster of 17 returning members, the team began to gear up for the start of the season.

“We got a lot of good new guys coming in who are ready to fill some roles that we lost. We have a lot of returners that are looking to fill bigger shoes from the guys we lost last year,” said forward Cody Brightbill. “But, we already have an instant chemistry with the new guys and we’re a pretty close bond with everyone on the team and I think we’re all fired up for the season and ready to get things started.”

The team also welcomed back Joyce and Gayso, who will be helping the coaching staff this season. Previously, RMU has seen several other alumni return to help with prospect camp, tryout and coaching. Cam Zappi graduated in 2014 and returned last year to help behind the bench. So, the familiar faces aspect is not an uncommon aspect for the team.

Despite losing some of their bigger scorers, the team still has senior Joe Boyer, juniors Chris Howland and Brightbill and sophomore Travis Reece who all ranked in the top 50 leading scores in the CHMA. The four came out with a combined 79 points during last season’s run.

This season the team will play a total of 32 games — 14 at home and 19 away. The team will head to RMU of Illinois for a tournament in mid-November, make a short drive up to play Penn State at the new Pegula Ice Arena and to the new UMPC Lemieux Sports Complex. The schedule also features two games with each CHMA team as well as two games against top 20 school Delaware.

After last season’s success story the Colonials look to continue with their eyes on the prize as they enter this weekend’s open series against Indiana University.

“We have some pretty high goals again this season, we definitely want to defend our CHMA Championship again,” said Brightbill. “Win the regular season, win the conference playoffs and then get to Nationals and definitely win a game there, and just be competitive in all our games this season.”