‘Round about Pittsburgh: Born in an Igloo Part II 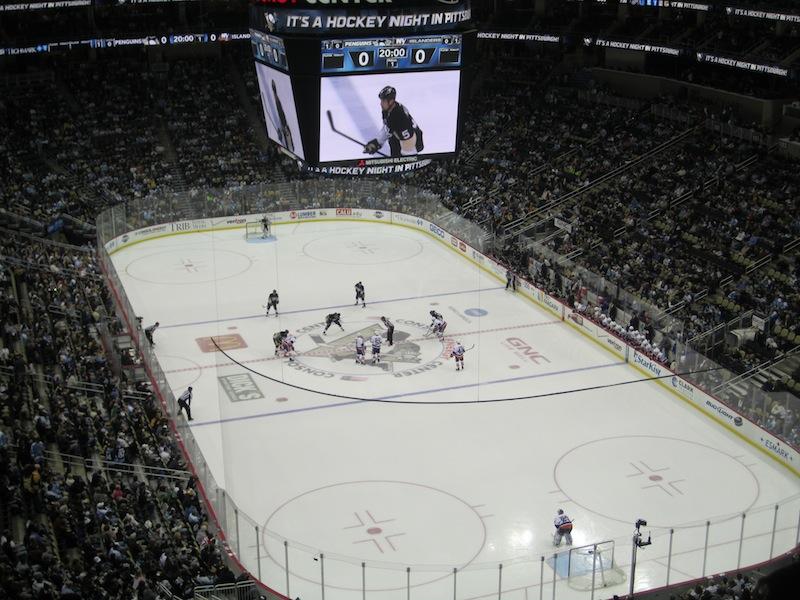 When future Hockey Hall of Fame broadcaster Mike Lange joined the Pittsburgh Penguins organization in 1975, it seemed as if the team had found instant success.

Beginning in the mid 1970s, the club became known for having some of the top players in the league led by the “Century Line” of Syl Apps, Lowell MacDonald and Jean Pronovost. At this time, the Penguins also had top offensive threats such as Rick Kehoe, Pierre Larouche and Ron Schock. Along with top defenseman Ron Stackhouse and Dave Burros, the Penguins were able to become a postseason threat.

When the Penguins lost to the New York Islanders in the 1982 playoffs, the team would decline in the following years. The Penguins were the worst team in the NHL during the 1983 and 1984 seasons. Although the team began to suffer financial problems again, and questionable business moves were made, the team was able to secure the number one draft pick in the 1984 NHL Entry Draft.

In 1984, the Pittsburgh Penguins drafted future Hall of Fame legend Mario Lemieux. On his first shot, shift, and in his first NHL game, Lemieux scored a goal on Boston Bruins goaltender Pete Peeters.

With the resurgence of interest in the Penguins, Mario Lemieux continued to impress the crowds and please the city of Pittsburgh. With the newly found success, the team was able to acquire superstar defenseman Paul Coffey and Tom Barrasso.

Along with the help from young talent such as Kevin Stevins, Rob Brown, John Cullen, Phil Bourque, Troy Loney and Bob Errey, the Penguins were able to regain the competitive edge they had in the late 1970s. In 1989, the team, finally made it back to the postseason.

Starting in 1990, the team began to put the final pieces together that would help it capture back to back Stanley Cups in 1991 and 1992. The signing of Bryan Trottier, drafting Mark Recchi and Jarmior Jagr and trading for Joe Mullen, Larry Murphy, Ron Francis and Ulf Samuelsson were a major part of the Penguins major success in the early 1990s.

In 1993, Mario Lemieux was diagnosed with Hodgkin’s disease. Despite missing games and even an entire season, Lemieux and the Penguins remained strong and successful throughout the 1990s. The 1990s would bring fan favorite players such Alexei Kovalev, Martin Straka, Robert Lang, and Darius Kasparaitis.
For years, these players would become fixtures in the Penguins lineup. When Mario Lemieux announced his retirement due to health-related issues, the Hockey Hall of Fame waived the three-year waiting period and inducted Lemieux into the Hall of Fame the same year. Unfortunately for the team and the city of Pittsburgh, tough times still lied ahead.

In November 1998, the team had to once again file for bankruptcy. Shortly after the announcement, Mario Lemieux and a group of investors announced their plans to purchase the Penguins. Pittsburghers know this as the second time Lemieux saved the team. Certainly it was a surprise when Mario Lemieux bought the Penguins, however the Pittsburgh and the hockey world were in for a shock that would come on December 27, 2000.

On December 27, 2000 Mario Lemieux shocked everyone when he returned to the ice becoming the first player/ owner in modern day hockey. Even with the return of Lemieux and star power that made up the team, the Penguins were unable to beat the Devils in the Conference Finals.

After the season, the Penguins parted ways with future Hall of Famer Jamoir Jagr. Over the next few seasons, interest in the organization dropped as more stars left town. By the end of the 2003-2004 season, gone were stars such as Kovalev, Straka, Lang, and Kasparaitis. The end of the season also marked yet another losing season without a playoff birth and the possibility of a yearlong strike due to contract negotiations with the players union. One bright spot was a young goaltender that would eventually become a Penguins super-star.

By the time hockey returned for the 2005-2006 season, Pittsburgh was excited in the same way when Mario Lemieux was drafted. Eighteen-year-old phenomenon Sidney Crosby had been drafted by the team and was expected to play the entire season for the Penguins. Immediately, Crosby made his presence known in Pittsburgh and the league.

Although the Penguins would not make the playoffs, the team would eventually regroup in the following years and eventually make it back to the Stanley Cup Playoffs and Stanley Cup Finals in 2008 & 2009. The team may have lost in 2008 but in 2009, the Penguins had their revenge as they defeated the Detroit Red Wings who they lost to the previous season.

Since then, the Pittsburgh Penguins have become one of the most feared and popular teams in the NHL. With stars such as Sidney Crosby, Evgeni Malkin, and Mar-Andre Fleury, the Penguins have regained the loyal fan base they once had and are now financially stronger than ever. The Penguins eventually moved out of the old Civic Arena and currently play their home games at the state of the art Consol Energy Center.

With any sports team, there is so much history however only so much can be covered. For more information on the Pittsburgh Penguins, visit the teams official website, www.pittsburghhockey.net. For diehard fans, I suggest reading Total Penguins: The Definitive Encyclopedia of the Pittsburgh Penguins written by Rick Buker.