‘Round about Pittsburgh: Gulf, Not Golf 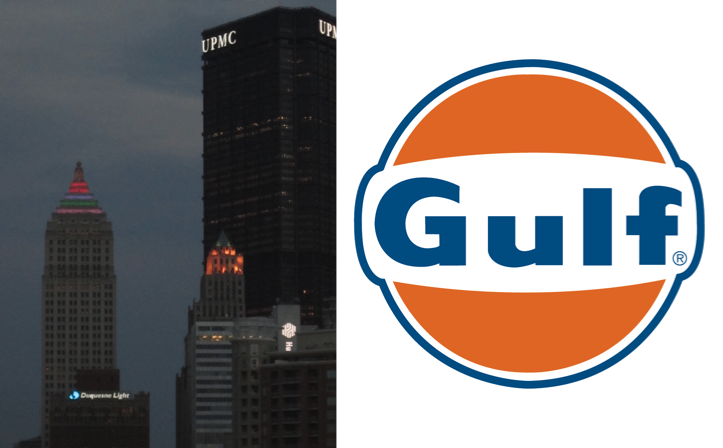 The Gulf Tower (far left) is shown with the weather beacon. The building with the UPMC logo at the far right of the picture is the U.S. Steel Tower. Logo courtesy of Gulf Oil LP

Pittsburgh was once a city that boosted an empire of all sorts of businesses.  The Mellon Family, who in their own rights started an empire, established some of these businesses.

After numerous successful business ventures the Mellon Family decided to enter the oil business.   In 1901, they began when the Gulf Oil Corporation was established.  William Larimer Mellon was a founder and active leader of the company for 45 years.

At the time, it may have been considered a risky decision considering John Rockefeller controlled the industry with his company, Standard Oil Company.  Over the years, Gulf Oil would expand over the years to become one of the largest oil company’s in the world.  Gulf Oil changed the industry forever when the company opened the first automobile service station, now known as a gas station, in Pittsburgh December 1913.  The company was also responsible for introducing complimentary road maps.

The Gulf Tower is widely known in Pittsburgh for its popular weather beacon that for a number of years displayed Pittsburgh’s forecast on top of the building.  At night, the original weather beacon utilizing neon lights and the colors of Gulf Oil, blue and orange, would either flash or stay constant to indicate the weather.

Below is how you can read the new Gulf Tower Weather Beacon:

Red: 80 Degrees and Above