“One Flew Over the Cuckoo’s Nest” 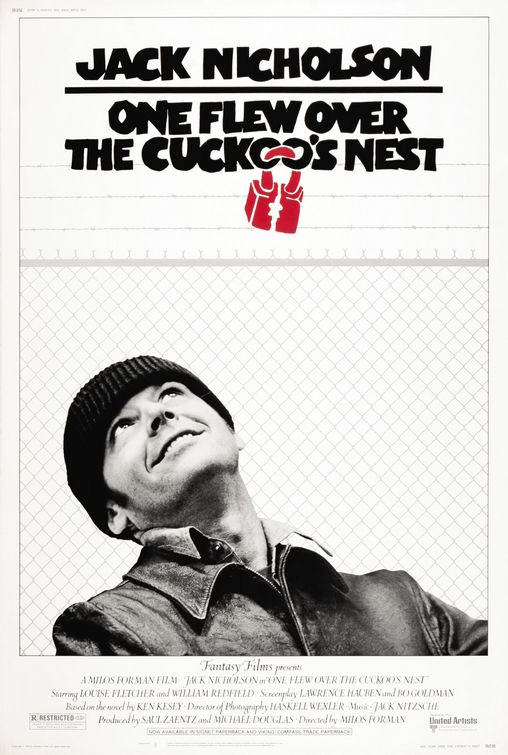 With the news of Jack Nicholson’s retirement swirling around in the media, I couldn’t help but be re-inspired to write this post. Originally, I had planned for “One Flew Over the Cuckoo’s Nest” to be my first review for Out of My Element, but logistically, it made more sense to save it for later.

It is now later, and I can’t wait to write this. “Cuckoo’s Nest” is one of my favorite movies, and though it is a pretty serious drama, there are definitely moments you can’t help but smile at.

If by some off chance, you had to read the book One Flew Over The Cuckoo’s Nest in high school like I did, DO NOT LEAVE. Much to the dismay of the author, Ken Kesey, but much to my delight, the movie doesn’t follow the book very closely (I found the book to be confusing and boring, but that doesn’t matter. This isn’t a book review). The movie is almost a completely different story.

Starring Jack Nicholson as the main character R.P. McMurphy, Will Sampson as The Chief, Lousie Fletcher as the maniacal nurse Ratched and a whole host of before-they-were-famous stars (Danny DeVeito, Christopher Lloyd, Sydney Lassick to name a few), this movie is insanely good (pun very much intended).

Taking place in the late 1950s, “Cuckoo’s Nest” follows the story of R.P. McMurphy (Nicholson), a man who has been placed into a mental institution after a brief stint in prison for raping an underage girl. Authorities at the prison believe that McMurphy is faking being mentally ill in order to get out of prison, and decide to check him into the care of Nurse Ratched (Fletcher) at a mental institution to determine if he is in fact mentally ill.

Once at the institution, McMurphy starts his own mini revolution amongst the patients. Seeing how poorly treated they are by the manipulative Nurse Ratched, McMurphy encourages the other patients to revolt in various ways throughout the movie. Ways only McMurphy knows will anger Nurse Ratched beyond belief, and make her slowly lose control of not only the patients, but entire hospital as well.

“Cuckoo’s Nest” is easily one of the best movies of all time. With a slew of awards (it won five Oscars, including Best Picture), this movie is quality through and through. One of the things I believe makes this movie so legendary is the way the film was executed. Filmed at an actual mental hospital, many of the extras in the movie (mostly the guys you see walking around in the background), are actual mental patients, something that adds a beautifully haunting and realistic element to the movie.

I know it’s old, I know it’s a drama; I also know it’s not the typical movie college students want to watch. But, please trust me, it’s worth your time. Let’s just hope you don’t believe that I’ve led you astray with my movie selections yet.

And as news of Jack Nicholson’s retirement continue to pour in throughout the next week; movie lovers will undoubtedly begin to start listing his greatest roles. Though there are numerous memorable ones (Jack Torrance from “The Shining,” Edward in “The Bucket List,” the joker in “Batman,” the list goes on and on) I think it’s this role as R.P. McMurphy that will end up topping everybody’s list. It definitely tops mine. I couldn’t think of any better way to honor the legendary man behind the character then to witness this character in “One Flew Over the Cuckoo’s Nest.”

What do you think are Jack Nicholson’s most memorable roles? Does R.P. McMurphy and “One Flew Over The Cuckoo’s Nest” top your list?