“Planet of The Apes:” A classic of epic proportions 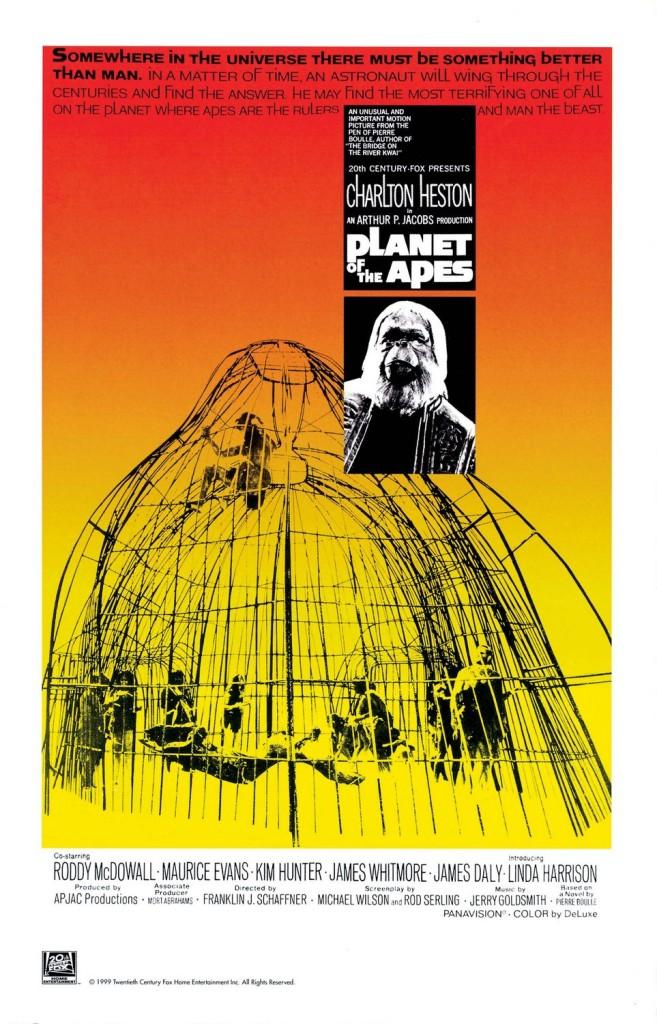 I’ve been putting off writing this article for as long as I can, but every week when it comes time to choose what movie I’m going to review, I find myself putting this movie at the top of the list. The reasons as to why I’ve been so slow to write this are numerous. For one thing, it’s a classic: and when I say classic, I mean classic.

Considered one of the greatest films in cinematic history, and a defining moment for one of my favorite genre Sci-fi, I feel that I owe it to this movie to write a great article. If I do anything less than my best, I will have disappointed myself. That’s a whole lot of pressure, but as I continue writing reviews, it’s inevitable I will hit this movie eventually. I figure, for my sake, the sooner I rip off this monster-sized, proverbial Band-Aid, the better.

The movie I’m talking about, as I’m sure you’ve guessed from the context clues in the form of a movie poster and trailer at the beginning of this article, is “Planet of The Apes”.

This 1968 movie starring Charlton Heston is, as I said before, cinematic royalty. Roughly based off the French novel “La Planète Des Singes” by Pierre Boulle, “Planet of the Apes” was a movie ahead of its time. If you haven’t heard of this movie before, I’d be shocked. It’s ending is one of the most famous, and most well known in movie history (I still won’t ruin it for you, just in case you’ve been living under a rock and have no idea what I’m talking about), but that being said, for those of you who do know, a tune-up on the story couldn’t hurt.

The fictional account of three astronauts who are stranded on a distant, and seemingly abandoned planet, “Apes” begins at somewhat of a slow pace compared to modern cinema. After their rocket crashes on the foreign scape and sinks at the bottom of a river, along with most of their supplies, the now desperate astronauts enter survival mode. Deciding that the best course of action is to walk through vast wastelands in hopes of finding civilization, the three begin their long trek, on this strange and distant planet.

Along with his two partners, Taylor (Heston) slowly but surely makes his way through the wastelands. This takes about 10 minutes from the run time. They walk, and they walk, and they walk some more, and eventually come to a giant ridge. Tired and weary, they climb up the ridge, and much to their surprise find . . . more wasteland.

Don’t worry though, once you hit about 40 minutes, the speed of this film never lessens. Back to what I originally was talking about though, It’s at this point in the movie, all 40 minutes in, that you finally get to meet more characters. Characters that much to the surprise of most people watching, are humans! (Okay, come on! Where are the Apes?! Apes is in the title, shouldn’t there be apes?!) To that I say, hold your horses. Yes, it will take almost an hour for the movie to catch up to it’s main attraction, the humanoid apes, but welcome to the beauty and magic of classic cinema.

Good timing is something that has seemed to be lost in modern movies. You know what makes old movies good? They wait to give away the best part! Some might say they make you suffer, but I reject that. They’re not trying to make you suffer, they’re just making you wait, and waiting makes things better, doesn’t it? The apes are the main attraction, the coolest factor, true, but if they flaunted them through the whole movie from start to finish, I guarantee it wouldn’t be as superior of a movie (like a certain retelling, that, while I certainly don’t hate, holds virtually none of the magic of the original. Mmhmm Tim Burton, I’m looking at you).

The long wait is also very intentional in another way.  Believe it or not (I’ve been saying that a ton lately), THIS MOVIE IS NOT ABOUT THE APES.

Sure, they’re the reason most people watch this movie, but in reality this is the story of an astronaut named Taylor (Charlton Heston) who is trying to make his way back home. The apes are secondary.

Don’t get me wrong, I love the apes, the lead orangutan Dr. Zaius is my favorite character in any movie I’ve ever seen (for those of you who follow me on twitter, now you know where I got the name @EddieZaius), but the apes are not the main character in the movie. I’m not saying they aren’t the best part of the movie, the make up artistry that went into this movie made nearly 50 years ago is truly ahead of it’s time, and the acting on the part of the simian characters has yet to be matched, but they certainly aren’t the focal character.

All I’m trying to tell you, or rather warn you of, is that you shouldn’t go into this movie expecting apes left and right, or I guarantee you’ll be disappointed. They’re in there, but somewhat sparingly. You can’t watch this movie for them. You have to watch it because you’re prepared to observe one of the greatest, and most important movies of all time, and for that reason alone.