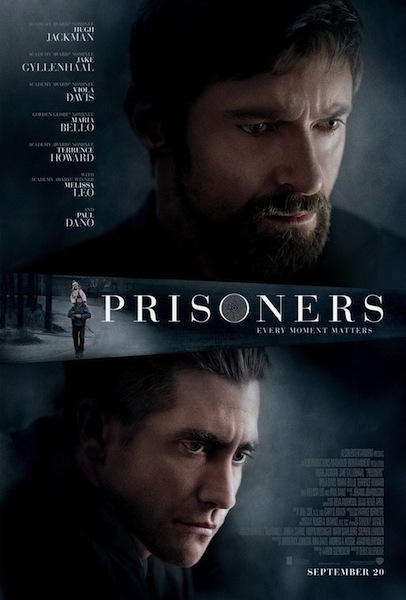 So, you’ve seen the trailer, or just watched it for the first time above, for “Prisoners” and most likely thought, “Wonderful. Looks like another revenge-fueled, crime drama that reveals the whole storyline upfront. Why should I see this?”

Believe me, I thought the same thing before seeing Canadian director Denis Villeneuve’s Hollywood film debut. But, also believe me when I say it’s not what you’d expect.

The film opens with Keller Dover (Hugh Jackman) and his son, Ralph (Dylan Minnette), hunting a deer in the peaceful woods that is quickly torn apart with the firing of Ralph’s gun – a metaphor for what is to come.

With the fresh kill cleaned and ready to cook, Keller, his wife, Grace (Maria Bello), his young daughter, Anna (Erin Gerasimovich), and Ralph head over to the Birch family’s home in the neighborhood to celebrate Thanksgiving.

Keller and Grace enjoy the company of their good friends, played by Viola Davis and Terrence Howard, while the couples’ two younger daughters, Anna (Erin Gerasimovich) and Joy (Kyla Drew Simmons), go back to the Dover’s home to find a whistle Anna left there.

Time passes and the girls never return, sending both families on a frantic search for the two girls both at the Birch and Dover’s house.

When it is clear the girls are not at either home, Ralph mentions a beaten-up RV that was parked in front of a neighbor’s home that the girls had climbed on during a walk earlier with him and Joy’s older sister, Eliza (Zoe Borde). The police are contacted and a description of the RV goes out.

Contrasting the family togetherness on Thanksgiving, Jake Gyllenhaal’s Detective Loki (No, not that Loki.), is introduced, sitting alone at a local diner when the report of the RV comes in. He spots the RV soon after and takes the driver, a soft-spoken, creepy young man named Alex Jones (Paul Dano) into custody after he attempts to flee.

Due to insufficient evidence, Alex is released a few days later, sending Keller into a furious rage. Keller is convinced that Alex is the one who kidnapped Anna and Joy and decides to take the law into his own hands since the police have nothing to hold him.

Keller kidnaps Alex and tortures him for days with the help of Terrence Howard’s character, who isn’t too happy with the situation, but also has no idea what else to do. These scenes are gruesome and have almost a horror-film feel to them in the way Keller brutally beats Alex in the hopes of him revealing the location of the girls. Is this right? What if Alex really isn’t the kidnapper? How could one just abandon their morals so easily? All questions that I’m sure no one could answer without being in such a situation.

Now, everything described above is exactly what is portrayed in the trailer, but that’s only half of the film. The second half you may not see coming with its multiple, clever twists.

With a running time of two hours and 26 minutes, this movie never feels as though it has gone on for too long. Every piece of the story shown is essential and needed to keep you on the edge of your seat until the very final moment, as the screen fades to black.