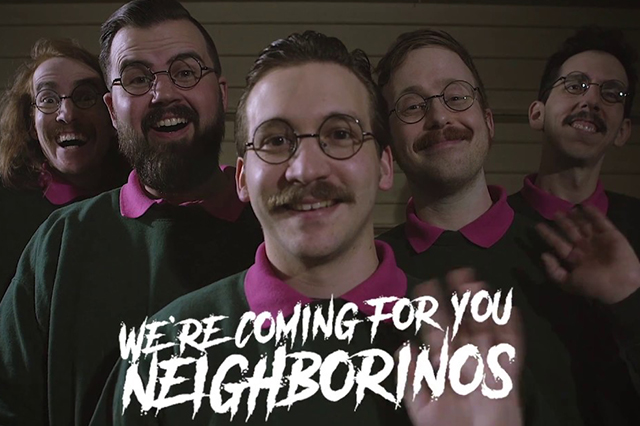 When people think of Ned Flanders from “The Simpsons,” they usually associate the left-hand obsessed neighbor of Homer Simpson with his weird, devout Christian mannerisms. He is not known for screaming about vegetables, shredding out a guitar solo or being in a metal band dedicated to himself.

The Phoenix, Arizona, based “Okilly Dokilly” did exactly that, starting the world’s first “Nedal” band. All five musicians dress like Ned Flanders as they perform, singing quotes from the TV show and from the iconic character himself.

Why anyone would want to base a heavy metal band off of the human embodiment of a saltine cracker is beyond me, but the band definitely rocks their Flanders aesthetic. The band brings “The Simpsons” aesthetic to life in various ways, such as throwing around giant inflatable donuts at their concerts.

In some ways, it’s almost as if the real deal went crazy, cloned himself and started a metal band dedicated to himself. The band’s lead singer, “Head Ned,” describes their music as “Not as fast as Bartcore, and a little cleaner than Krustypunk.”

The band’s first and only studio album, “Howdilly Doodilly,” is full of weird and interesting takes on the titular character, as well as other characters from “The Simpsons.”

Today, we will be talking about three songs off “Howdilly Doodilly:” “Vegetables,” “Nothing at All” and “White Wine Spritzer.”

The first song we are talking about,”Vegetables,” takes a fan-favorite quote from Season 3 Episode 13: “Bart the Lover.” In the episode, Ned Flander’s youngest son Todd learns a new swear word from Homer. The band takes his response and transforms it into a cry of rebellion in the war against vegetables.

The only two lyrics of the song are “Oh no!” and “I don’t want any damn vegetables!” If you have a short attention span and can only remember two lines, you may have found your new favorite karaoke song for.

If screaming into a microphone about carrots and broccoli does not fit your criteria for karaoke, then maybe “Nothing at All” will. This song’s title quote comes from Season 11 Episode 10 of the show, “Little Big Mom.” In this episode, Flanders brags about his ski suit being so comfortable that it feels as though he is wearing nothing at all.

“Nothing at All” opens with a tender sounding guitar riff, unlike the sound Okilly Dokilly usually performs, but it quickly drops back to their signature sound when Head Ned starts to growl Ned’s iconic quote. The music almost has a “I-do-not-need-you-I-am-better-off-without-you” feeling. The song ends with the equally famous response from Homer Simpson: “Stupid sexy Flanders.”

Equally as sexy and stupid as Flanders is the last song we will be talking about today, “White Wine Spritzer.” The song takes a quote from Season 10 Episode 10: “Viva La Flanders.” This episode sees Homer coaxing Flanders to enjoy himself on vacation in Las Vegas, eventually getting him to order a White Wine Spritzer.

While the other two songs felt like they could be within Flanders’ character, this one feels the least faithful to the true Ned. Ironically, this one feels like it could have been ripped from the episode it was based on because it was an out-of-character move for Flanders to order alcohol.