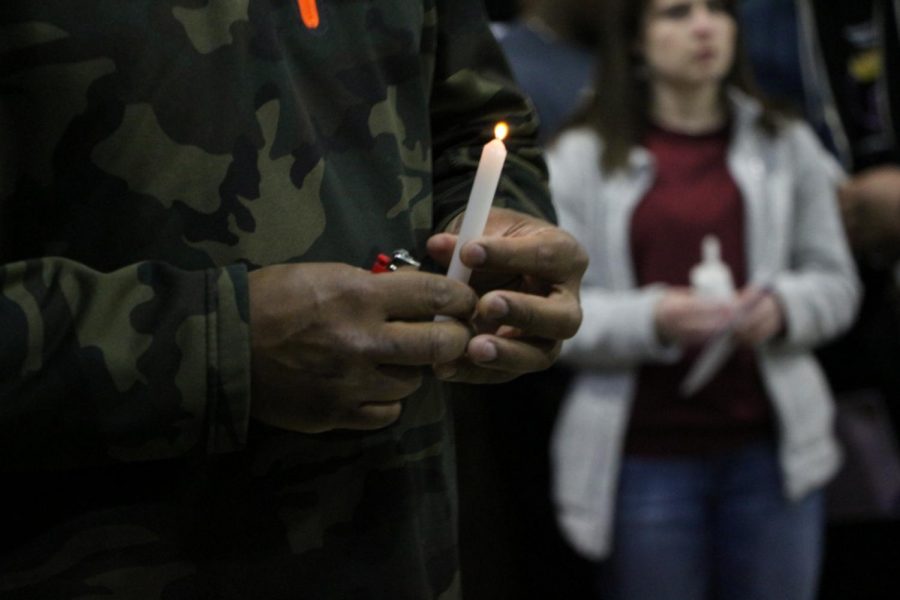 After the two teens fled from the vehicle, Rosfeld shot and killed Rose, who was unarmed at the time. In the recent four-day trial, Rosfeld was found not guilty of criminal homicide.

At 9 p.m. on Thursday, students across campus gathered in the gazebo to pay their respects and give their support. Among them was Marquice Scott-Ford, who knew Rose personally and has a picture of him in his dorm room.

“I actually went to elementary school with him and I just knew him around the neighborhood — we grew up together,” said Scott-Ford, “Actually my roommate, that’s his cousin, so there’s a picture of Antwon and him in my dorm room.”

As a speaker in the vigil, he expresses his grief after his death.

“He was a great kid,” Scott-Ford recalls. “I just wish it could’ve went differently. It definitely hurts, especially to see someone’s mom cry and go through what she did.”

Among Marquice Scott-Ford, others shared their stories and emotions through performances and speeches. Members of the National Council of Negro Women (NCNW), organizers of the event, opened the vigil with the poem “I Am Not What You Think.”

Pastor Craig Giles followed with a prayer. Giles urged people to take action, he speaks about fighting injustices through more than prayers, but with individual voices. Vice president of the NCNW, Savannah Francois, agrees with this mindset.

“I think it’s important that we understand we have a big role to play in our government,” said Francois, “Make sure you are registered to vote – vote for members who are going to take action against injustices like these.”

CCO Campus Ministry staff Lee Haney followed with another prayer, emphasizing the urgency of the situation.

“We don’t look at his life as just another case,” he said, “We don’t let our hearts grow cold as we hope for change. We don’t let the time it’ll take and the work we will have to put in to discourage us — but rather, we are gripped by the fierce urgency of now.”

This fierce urgency was felt throughout the circle during the performances. Unique Soundz Gospel Choir sang “Total Praise” while singers Bryce Chisom and Savannah Francois performed the duet “When You Believe” by Whitney Houston.

The uplifting message spoke to the performers, showing people that hope can spark change and that positive memories matter.

“It’s okay to take the time to remember somebody’s life, and be happy about all the things they left behind, even though they are no longer with us,” said Francois.

As a criminal justice major and aspiring law enforcement officer, Antwon Rose’s story affects her personally. Her goal is to make people feel safe with law enforcement at a time when many do not. From a law enforcement standpoint, she shares her thoughts on Rose’s death.

“I believe that although (Rosfeld) was justified in his actions, he was not justified in taking his life,” she said, “He could’ve done so many other things besides take out the gun and shoot.”

For Scott-Ford, he hopes that his community can find solutions to end these deaths. As an individual who grew up with Rose in a low-income community, Scott-Ford hopes that people will start taking his death seriously and make a change.

“It just fuels a fire that has already been burning,” he said, “Where I come from, situations like this, it’s sad to say but it’s expected.”

Scott-Ford emphasizes the importance of recreational centers and creative outlets in low-income communities to help people release their stress in a more productive way. He also supports teaching classes where people can get a full understanding of their rights in dangerous situations.

After the candlelight vigil, there was a moment of silence for Antwon Rose, to remember the impact he had on his family and the community.

“I just look at so many other situations where school shooters and other armed people walk out alive — and for my friend, someone that I knew, walks away without his life and his family in tears,” said Scott-Ford.

For him, the vigil made Antwon Rose more than just a statistic. With community support, he has more hope for what is to come.

“This event meant a lot,” he said, “So many people that don’t even know Antwon come together — it definitely speaks volumes.”