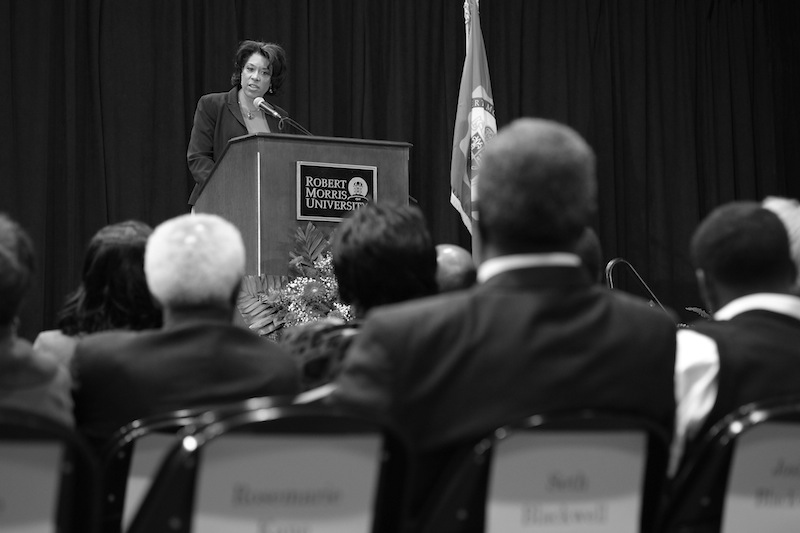 Dr. Daria Crawley encourages the attendees to help continue her husbands work in black male leadership, and the encouragement of young minds.

A memorial and celebration of Dr. Rex Crawley’s life was held on February 7th in the Charles L. Sewall Center.

Dr. Crawley passed away on November 25, 2013 from Non-Hodgkin’s Lymphoma.

The touching celebration dedicated to the life of Dr. Crawley was a time for just a handful of the thousands of lives he improved to pay their last respects. Based upon the 11 speakers at the celebration, it was evident just how many lives were changed, not just by his mentoring, but also by his friendship.

Joel Gray, a former student of Crawley’s, shared a poem devoted to his lifestyle and visions.

Gray quoted Crawley with, “My goal is to get more young black men off the bench and into the playing field.”

Crawley devoted his life to being a mentor and a friend to not only African-American males, but to everyone who needed a helping guide.

“Manliness means reaching out to others,” said Provost David Jamison, stating this as one of Crawley’s life mottos. This motto became evident through all of the achievements made during his life.

Dr. Daria Crawley, his beloved wife, was given a standing ovation after she brought the audience to tears with her words not only of his brilliance, but his legacy. The celebration came to a close when those who wore Crawley’s trademark bow tie were asked to place the on a tree to honor his vision to make a change in today’s society.

Crawley was a beloved father, husband, co worker and friend who will be missed by the thousands who had the opportunity to know him.