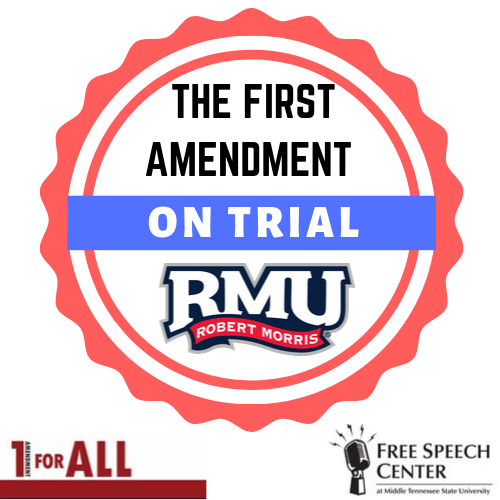 Professors Ann Jabro and David Jamison received a $2000 grant from Middle Tennessee “1 for All” program, that allows them to educate students and the public on the freedoms of the first amendment.

The two decided to construct a student-run debate that would dive deeper into the subject.

“We students are organizing, planning, and creating an entire debate from the ground up,” said Lauren Comito, one of the event organizers. “We are the pioneers of this experiential learning adventure and we invite you to be apart of this experience at the debate focused on the Freedom of the Press.”

Jamison reached out to political science students to participate in the debate. These students were split into four pairs with each student discussing a particular trait of the first amendment. The first team is set to debate freedom of the press, which will be followed by a discussion on freedom of assembly.

“Dr. Jamison’s students are stepping up to the plate to debate in front of a live audience,” said Kayla Carbert another member of the social media and public relations team.

Each week, debaters will reexamine a case from the Supreme Court that is relevant to their particular freedom.

Breanna McCann and Travis Sapp are the first students to debate. The two will be exploring the case of New York Times v. The United States. Breanna will be representing the New York Times, while Travis will argue for the U.S. government.

On the other hand, Jabro began working with students in both her social media and public relations classes. These students constructed social media pages for Twitter, Instagram and Facebook.

Enjoy the Freedom to Press SEND! First Amendment on Trial – Freedom of the Press debate will be held October 31 at 1:30 p.m. in the AMC! Refreshments and a short afterparty will be held for our live studio audience immediately following. pic.twitter.com/WDOZqkmCVS

Behind the scenes look at filming some PSAs yesterday! We can’t wait for everyone to see the finished product on October 31. pic.twitter.com/WyfnItorud

“Students in Dr. Jabro’s Social Media and PR class were awarded a grant in which we will use towards creating a social media campaign for an event regarding the first amendment,” said Comito.

The debate is also including students from the Academic Media Center. These students will live stream and record each week’s debate.

Carbert shares that she is excited to see all of the different organizations and talents come together to make the event happen.

“This debate really encompasses what Robert Morris University is about,” said Carbert, “This event is going to be an outstanding addition to everyone’s Halloween plans.”