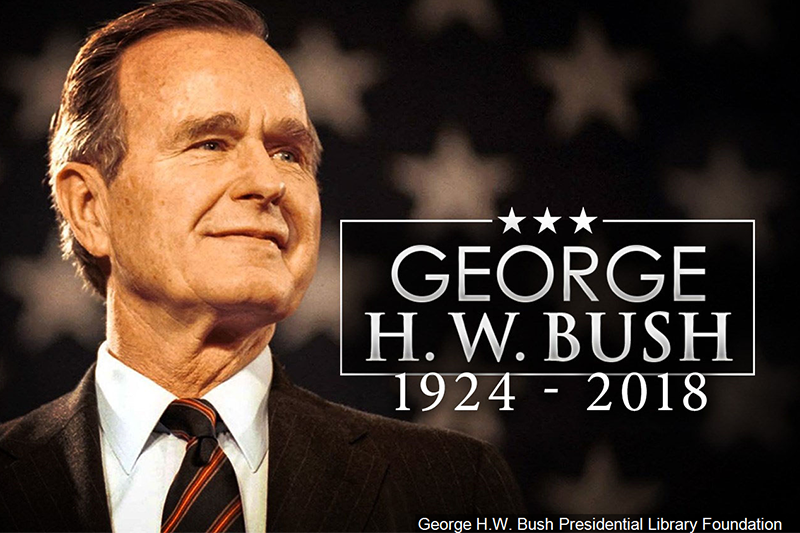 MOON TOWNSHIP – World War II veteran and the 41st President of the United States of America George H.W. Bush has died at the age of 94.

The family of the former president announced Saturday of the death of Bush who died late Friday night in his Houston home.

According to the Associated Press, Bush served in the United States Navy after enlisting in on his 18th birthday. Bush flew more than 50 missions in World War II where his plane was shot down. The then naval officer was rescued at sea by a submarine before being awarded the Distinguished Flying Cross for bravery.

President Donald Trump took to Twitter to share his condolences and grieve with the nation. The White House did confirm that the president and first lady will attend that state funeral.

The Governor of Pennsylvania Tom Wolf ordered all flags to be flown at half-staff in honor of Bush. Wolf took to Twitter to share his condolences with the family.

A decorated war hero and career public servant, President George H.W. Bush protected and brought honor to America. 41 will be remembered for the landmark ADA, his work with fellow vets, and bringing grace to service. Frances and I extend our condolences to the Bush family. https://t.co/3deN39sFfc

Allegheny County Executive Rich Fitzgerald also took to social media to send his thoughts and prayers to the Bush family following the death of the war hero and president.

“Our thoughts and prayers go out to the Bush family,” said Fitzgerald. “George H. W. Bush’s death marks the end of an era, as the last World War II veteran to have served as president.”

Our thoughts and prayers go out to the Bush family. George H. W. Bush’s death marks the end of an era, as the last World War II veteran to have served as president.He lived a life of service to our country – first as a naval aviator in World War II, then as a Texas Congressman,

“He lived a life of service to our country – first as a naval aviator in World War II, then as a Texas Congressman, CIA Director, Vice President and President. Even after his presidency, he continued to serve with the creation of the Points of Light,” said Fitzgerald.

Barbara Bush, the wife of the former president of more than 70 years, passed away in April, 2018.

Bush served one term as president before losing in reelection to Bill Clinton in the 1992 election.

“The president and first lady were notified late last night of President George H.W. Bush’s passing. President Trump is scheduled to speak with President George W. Bush this morning and offer his condolences on behalf of himself, the first lady and the entire country,” White House press secretary Sarah Sanders said in a statement.

The president has declared Wednesday as a National Day of Mourning.

Details around the former presidents funeral are still being determined.