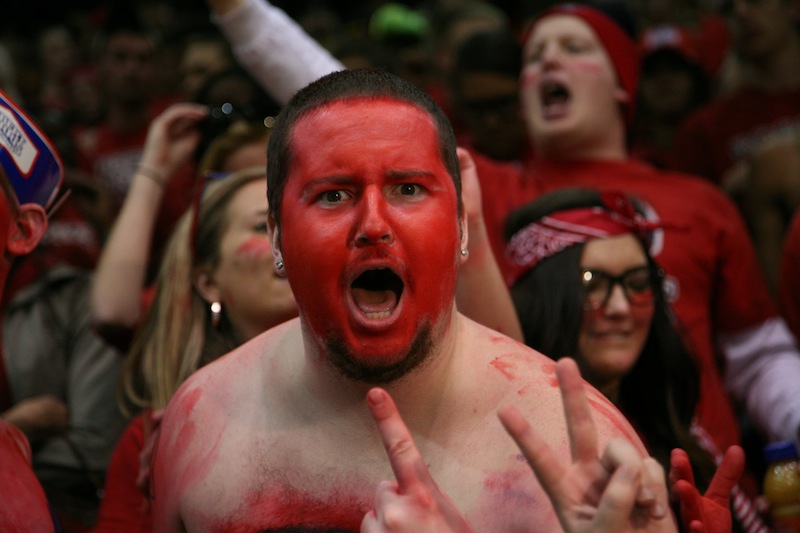 Though the Robert Morris Men’s Basketball team failed to make the NCAA tournament after being predicted to do so, post season fever swept RMU on Sunday night when it was announced the University of Kentucky was coming to the Charles L. Sewall Center on Tuesday night for round one of the NIT.  The team did not make the coveted March Madness tournament, but the feeling that engulfed the entire campus after this announcement was nothing short of madness, that also happened to be occurring in March. Besides, after the excitement that came to Moon Township and captured the nation with a contest like this, the Colonials were not heartbroken over their name not being included on this year’s bracket.

The chaos began early Monday morning when student tickets went on sale at 9 a.m., though students were lining up as early as three or four hours earlier than that. Tickets were reported sold out by 10 a.m., but the ticket search only escalated and grew more frantic as the afternoon progressed. Students that held tickets may as well have been holding gold, and they were then faced with the decision of to keep their way of getting into this event of epic proportions or to sell them to others with the same goal. In some cases, tickets were being sold and bought for well into the hundreds. If this all sounds crazy, the feeling of the game was on a whole different level in a phenomenal form of  absolute pandemonium.

It was game day, and the game was the talk of more than just the campus, the entire Pittsburgh area and ESPN were in on the speculations of how it would all play out as well. The line to get in wound around the Sewall Center early, and as soon as the clock struck 5:30 p.m., the arena flooded with students and chants of “Let’s Go Bobby Mo” and “RMU” could be heard all the way in the media room on the third floor. The crowd never even dipped down into so much as a dull roar before the game began, and the noise level during the game was no exception. Before tipoff however, there was one piece of business the student section had to take care of, and that making their personal mark by having a student dressed as Moses part the “Red Sea” of Colonial Crazies.

The game began and the Colonials clearly motivated by the hype of the game took an early lead. With every basket made the noise level escalated higher than before, and the crowd could simply not be contained. Crowds are typically called “The Sixth Man” when it comes to basketball games, and in this case the support was a huge factor in this game. The voices of Robert Morris fans were heard on every basket made, every call, every foul shot and every second of action in between. Possibly most impressive was the fact that this energy was kept up throughout the entire game without wavering for a single moment.

“The energy is unbelievable and you can see the school spirit in everyone’s eyes. Nothing beats being a part of this, it’s something you’d never expect to happen here.” said Sean Gallen, a RMU student who plays a big role in the student section.

Though the Colonials holding onto a lead the majority of the game helped keep the crowd intense, there were times of uncertainty as the time remaining wound down. The suspense was evident when the score was tied with just seconds left in the game as the Colonial Crazies cheered their lungs out and held their breath all at the same time. As the clock hit zero, the Sewall Center erupted in pure elation that was absolutely deafening as the student section was nothing short of a runaway freight train storming the court. Chaos ensued the arena as students yelled, hugged, jumped up and down, and did everything in their power to take full advantage of the moment that comes with a victory of this proportion.

“It’s absolutely unbelievable. I’m so happy for the players, coaches, students, and the university. The turnout was great and I couldn’t be more proud of our school.” said President Dell’Omo, who was right in the midst of the post game insanity.

Robert Morris may have been just a speck in terms of college sports, but on Tuesday night and Wednesday morning the school was a household name across the nation as well as the number seventh trend worldwide on Twitter. The team played a solid game against an extremely skilled team with determination as well as perseverance, but this game was about so much more than the scoreboard. It was about the atmosphere that swept Robert Morris University and the overwhelming sense of pride for all involved that came along with defeating a team with such great history in the sport.