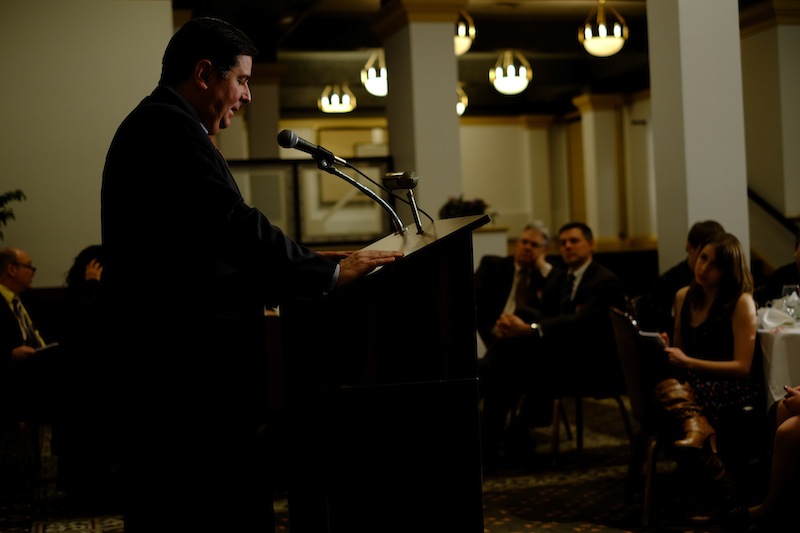 Newly inaugurated Mayor of Pittsburgh William (Bill) Peduto spoke Tuesday night at the Engineer’s Society of Western Pennsylvania to press members about his plans as the city’s newly elected mayor. This was followed by a question and answer session by the press in attendance.

Some of his goals include great interest to students at all local universities. Peduto discussed turning Pittsburgh into a ‘Buzz City’, meaning that he wants to further attract younger people to inhabit the area.  To do this, the Mayor wants to create a ‘Talent City’, which he is confident that Pittsburgh will become, as it continues to cultivate its own talent in its colleges and universities so that it can produce workers that will make the city thrive even more than ever.

The goal is that if the youth live in the urban areas outside of the city, the entire area will blossom.

“I think that with a lot of college students, they can see the potential around Pittsburgh a lot more than people who have lived here their entire lives.  What that means is you see a lot of young people now that are moving into neighborhoods that ten years ago, twenty years ago they weren’t moving into,” said Peduto. “They used to just be that it was Shadyside or Oakland now there are young people that are moving into Lawrenceville, they’re discovering Morning Side, they’re going up the South Side slopes and finding neighborhoods like Allentown. They’re finding that there’s this treasure of a great urban environment that is unique.”

But how will Peduto create the jobs necessary for this goal to be completed?

“We can be a partner to entrepreneurs and others to start their own businesses within the city,” he said. “We can offer tax incentives, across the board not just to the national big buck stores, but to small businesses that want to start and locate in Pittsburgh, and we can sort of work as a facilitator between the big corporations and the small businesses to drive a lot of the work that they’re getting done across the country to be done here so the small companies have to hire more people locally.”

Another point of interest was state government educational funding. Peduto explained that while he brought the issue up to Pennsylvania Governor Tom Corbett, they both danced around the issue without really meeting in the middle at all.

It will be interesting to see what the newly elected Mayor gets accomplished in his early time in office, but as things are looking now, his main goal is increasing the youth population within the city.