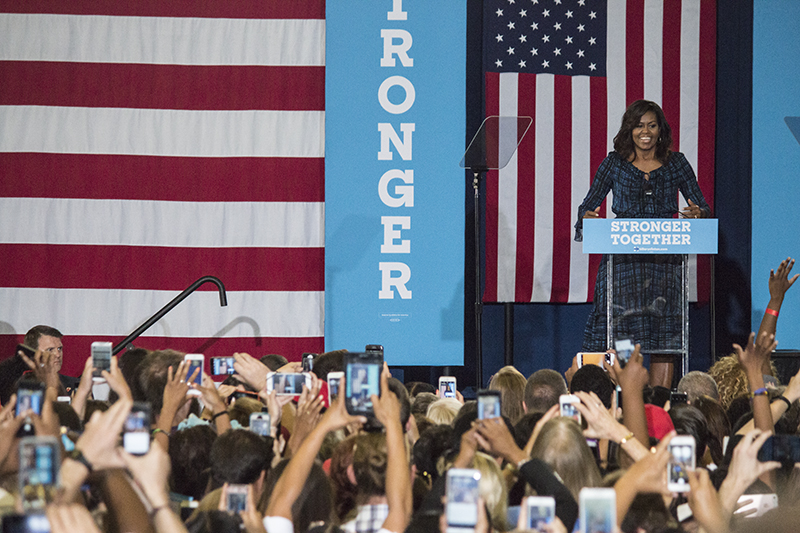 First lady Michelle Obama greeted a boisterous crowd at Fitzgerald Field House at the University of Pittsburgh on Wednesday.

Obama arrived in Pittsburgh, after visiting Philadelphia, to persuade young people to vote and to endorse Hillary Clinton.

“It’s about if someone can handle the awesome responsibility of leading this country,” said the first lady. “If you care to make this decision, and I hope there are people here who are questioning—who are undecided. I hope you are hearing me. I urge you to ignore the chatter and the noise and ask yourself which candidate really has the experience, the maturity, the temperament to (lead).”

Before Obama came out to make her speech, other politicians and students spoke about why they would vote and why it would be for Clinton.

“Politics matter, elections matter and if it weren’t so important, then why would the other side (republicans) be spending so much money to win it,” said Daniel Gilman, Pittsburgh city councilman. “Because this election matters…This election is about the very ethos of our country.”

The first lady was greeted with applause and cheers when she came onto the stage. She started off by talking about her family leaving the White House and joking about what life will be like after leaving an intense position.

“We’re not going anywhere,” said Obama. “We’re going to keep working…It’s a little bittersweet for me. We’re going through all this transition, me, Barack and the girls.”

She talked about what it would take to fill such a role as president. The job brings a lot of pressure and speculation with it and Obama thinks that Clinton will be able to get through it.

“When it comes to qualifications we must demand in a president, to start with, we need someone who can take the job seriously,” said Obama. “We need someone with superb judgment in their own right… At the end of the day, as I have said many times before, presidency doesn’t change who you are, it reveals who you are.”

Obama went on to talk about her knowledge of Clinton and why she believed Clinton should be the next President of the U.S.

“So who in this job is truly ready?” said Obama. “For me, it is obvious that there is only one person in this race who we can trust with those responsibilities. Only one person with the qualifications and temperament for this job. That person is our friend, Hillary Clinton.”

Obama ended her speech with why people should vote and encouraged all the students and young people in attendance to be proactive when it came to electing the next president.

“So here is what I want you all to remember, especially our young people, don’t ever let anyone take away your vote,” said Obama.

To register to vote, visit the I Will Vote website.