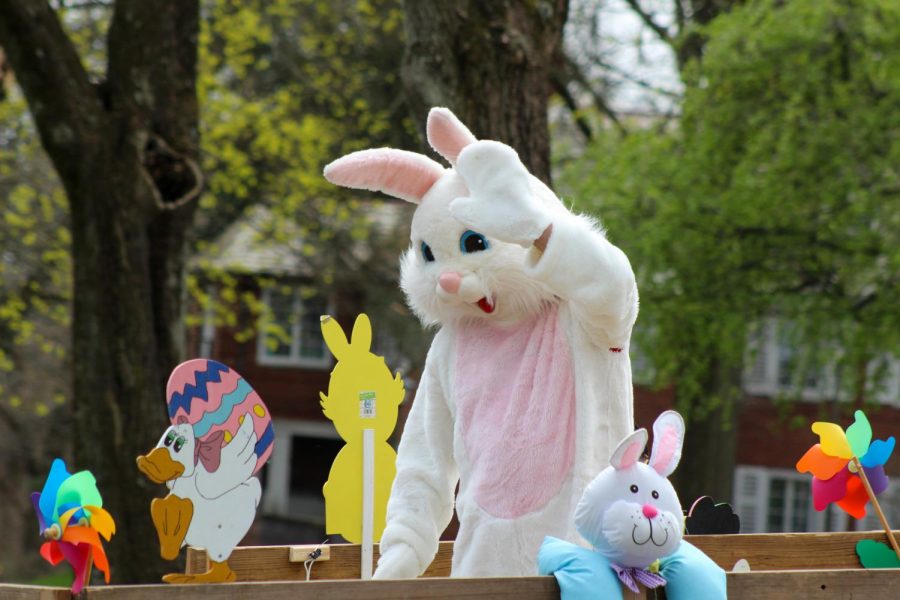 MOON TOWNSHIP – COVID-19 may have caused the cancellation of countless events throughout the United States, but it was unable to stop the Easter Bunny from safely spreading Easter cheer to residents in Moon Township.

Over the past several weeks, Americans have been learning the rules of social distancing as a result of the coronavirus pandemic. Citizens are encouraged to stay inside as much as possible, keep a 6-foot distance away from others and to wash their hands. These rules do not just apply to everyone, including the Easter Bunny.

“We knew a lot of kids were not going to be able to see the Easter Bunny so we wanted to take him around,” said Stacey Sommerfield, director of Parks and Recreation for Moon Township.

How were they able to do this? On Saturday, members of Moon Township Public Works paraded the famous rabbit around the area in an Easter-themed trailer attached to a truck. The parade allowed the bunny to maintain the recommended 6-foot distance from families, while also giving him the opportunity to wave hello and spread joy.

“When we set it up, we talked about putting one person in each vehicle. If this was a traditional Easter parade we’d probably have a couple of people in the trailer with the Easter Bunny and we’d be throwing things out but that wasn’t really going to be able to happen with the current rules in place,” said Sommerfield.

Families throughout Moon Township could be seen sitting in the backs of their vehicles or camped out in their driveways and front lawns, all hoping to catch a glimpse of the bunny. Sommerfield was a member of the parade and was able to see some of the reactions to the Easter Bunny’s visit.

“We had a lot of people make signs for us and get dressed up and bring out all their stuffed animals,” said Sommerfield. “I’d see kids run out of the house and be like, ‘He’s coming!’ and run back in and get their siblings and everybody is piling out of the house and it was just really fun.”

With only one Easter Bunny to go around and a nontraditional method of transportation for him, Sommerfield explained that planning the route was a particularly tricky challenge for the team to overcome.

“It was tough because there is a lot of neighborhood plants where the houses are very dense but it’s a dead-end street. One of the big challenges for us with the big truck and the trailer is just being able to turn around,” said Sommerfield. “We really were trying to focus on routes where we could loop around and not have to go in and back the same direction.”

The solution was to split the area into 15 different sections for the parade to travel through.

“Just try to get a few streets in each area of Moon so that people would not have to go far from home in order to see us,” said Sommerfield.

While the ultimate goal was to bring the Easter Bunny to the majority of the area, there were also hopes that the parade would remind residents that these odd times will eventually come to an end and that brighter times are ahead.

“One of the big reasons that we did this was to bring spirit and cheer but also to show people that when everything ends here we’re going to have great events at the park again…we’re all going to be able to get together as a community again,” said Sommerfield.

In the meantime, community employees are still working to satisfy the needs of residents, working heavily with online resources.

“I think it’s important to show people that we are still working on things for them and we’ve been able to push a lot of things online, said Sommerfield. “We’re doing paper newsletters for our seniors and wellness calls, we’re putting out educational activities on Facebook, we’re running trivia on Facebook, but it’s nice to be able to do something in person and to be able to celebrate.”

While the parade may have been a nice break from the living room, Americans must still follow social distancing guidelines. However, this does not guarantee that families can not still enjoy time together.

“I think there’s a way to, even though there’s a lot of rules going on right now with social distancing, for people to still be able to have fun and bring, a lightness and levity to everybody,” said Sommerfield.