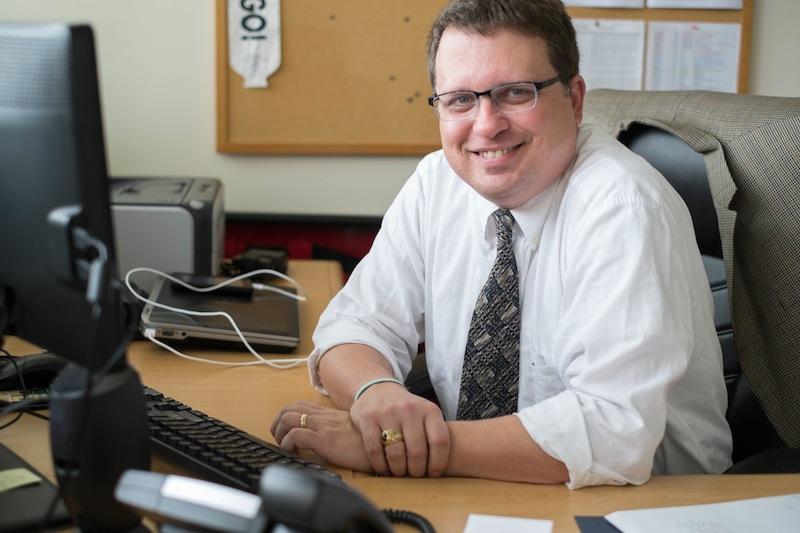 Anthony Moretti in his new office.

Robert Morris University journalism professor Dr. Anthony Moretti is preparing for a whole new responsibility on campus this year. For the 2014-15 academic year, Moretti has traded in textbooks for Student Engagement Transcripts as the new Co-Director of Engaged Learning.

“It was an opportunity to build on the success that was already here for engaged learning and on a more personal level. It was a chance to become more involved with the university,” said Moretti.

In his new role, Moretti, who previously taught at Point Park, will be in charge of making sure students complete their required criteria on the Student Engagement Transcript (SET), which are records of work that students at RMU are required to do outside of the classroom.

Robert Morris students have to complete two out of six categories on the transcript.

All extra-curricular activities, such as community service, international travel, participation in school clubs, and internships are included in the report.

Moretti is still going to be in the classroom, however rather than lecturing three classes, he will be teaching just one:

Instead of only grading papers, his typical day will now consist of preparing reports for meetings and checking emails.

Moretti relishes the opportunity to help students get involved in activities on and off campus just as much as he loves teaching in the classroom. With his new responsibilities for Engaged Learning, he has had to let go of some of his classroom obligations, which is a somewhat challenging place for him to be.

Though he is excited for his new title, the professor was aware beforehand that he would have to drop some classes to take this position.

“The way that institutions work, which is a benefit to everybody involved, is they recognize that if you’re going to take on a pretty heavy duty administrative or service opportunity, you’ve got to give up something,” said Moretti.

“And while I’m not thrilled to give up two classes, because I certainly love being in a classroom, I understand that it’s necessary to do this next big thing.”

Moretti, who is entering his third year at Robert Morris University, is anticipating success for Engaged Learning during his time as Co-Director.

“For me, the exciting part about this new job this year is to see how many of the ideas that we have to get off paper and get into practice and to see where those go,” he said. “I saw here a real commitment to building the program, adding to the success that was already there.

Moretti is looking forward to his new opportunities in Engaged Learning, where he will look for the same amount of success that he experienced as a professor.