Off to college and staying Catholic 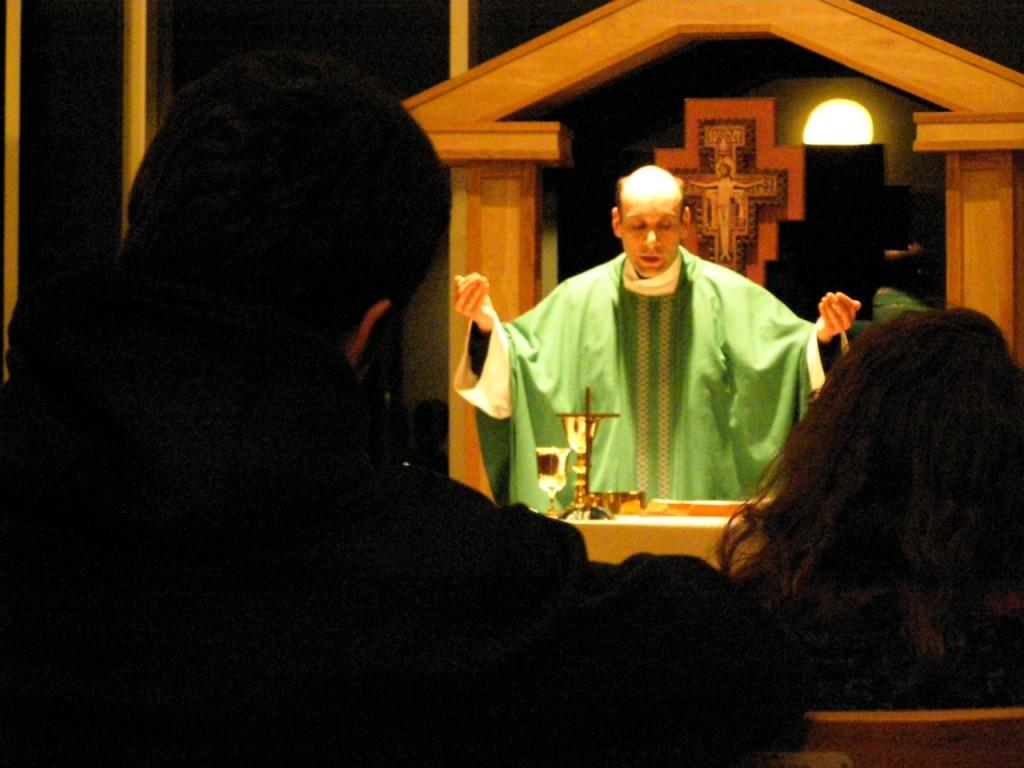 Father Michael Yaksick serves as the Catholic Chaplain for RMU and says mass most of the Sundays it is offered.

As a college student, it’s all too easy to jump for joy when moving out of the house away from a parent’s watchful eye into a college dorm of your own. But who is going to make sure you go to church on Sunday? The answer to that question is simple: campus ministry.

Like any other college, Robert Morris University offers its students resources to keep in close touch with their faith while away from home. Such resources include meeting times with religious ministers, special times for liturgy, and even time to meet with fellow students to have a friendly discussion about their faith.

One example of this opportunity is the Catholic Campus Ministry and Newman Club. This student run organization’s goal is to connect Catholic students, staff and faculty with Jesus Christ, the Church and its mission.

Gary Slifkey serves as the director of Catholic Campus Ministry at RMU and is looking forward to seeing even more growth.

“It’s only my third semester here, so I’m still very new to the school,” said Slifkey, who in the past was the leader of several organizations in the Diocese of Pittsburgh, including the Diocesan Youth Council and the Resource Team.

Now, still employed by the diocese, he serves as campus minster to RMU as well as Penn State Beaver campus.

“In general, Catholic Campus Ministry helps students to meet other Catholic students and keep their faith alive and growing,” stated Slifkey. “Being that Western Pa. is nearly 50 percent Catholic, many students here at RMU are from Catholic families. I have about 300 students on my mailing list.”

One of the big challenges that Slifkey faces is that even though he reaches out to nearly 300 Catholic students via email, masses and events are still not as full as he would like them to be.

“It’s hard getting the word out there; that’s my biggest challenge. However, in the few semesters that I have been here, I’ve seen a steady growth in attendance of events, so students are talking about it.”

RMU sophomore Phil Regaud is one of the campus ministry’s regulars. Regaud, a native of nearby Steubenville, Ohio, enjoys being part of the organization.

“I was always involved in the Catholic community back home with Franciscan University, so being involved here at RMU is like being back home,” Regaud said. “Growing up in the same neighborhood with the same parishes sometimes doesn’t allow you to grow.

“Here people are from all different walks of life and different backgrounds, so it really is a way to get a ‘global perspective’ as RMU would say.”

Regaud, who frequently serves masses on Sunday evenings, has even thought about a possible vocation to the Catholic priesthood.

“Education isn’t the only thing to do in college. Faith should be important if not the most important,” he said.

There are plenty of opportunities to practice and explore the Catholic faith at RMU as well as plenty of room for growth and new ideas. The Catholic Campus Ministry has events taking throughout every week; a small bulletin is offered at the beginning of each week at mass.

“My prayer is to see more and more students attending mass and events and to have a lot more students like Phil so passionate about their faith,” said Slifkey, who can be reached at 412-334-7804 or [email protected]