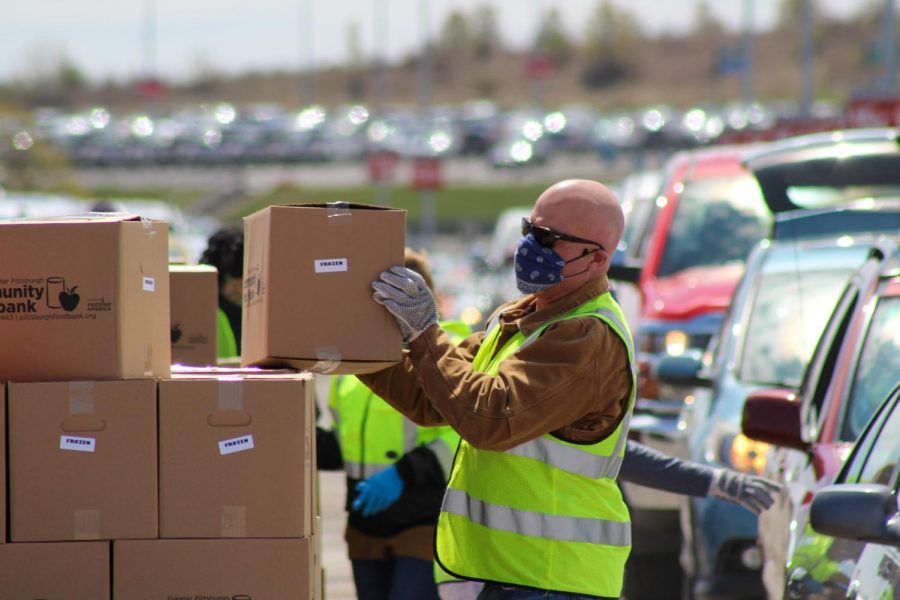 Over 800 boxes were distributed on Wednesday, but the food bank was prepared for 1500 or more visitros. Moon Township, PA. April 22, 2020. RMU Sentry Media/Garret Roberts

PITTSBURGH — Huge stacks of boxes containing food, lengthy lines of cars as far as the eye could see and numerous volunteers wearing neon vests, face masks and gloves. This was the unique scene at the Pittsburgh International Airport on April 22.

The Greater Pittsburgh Community Food Bank delivered boxes of food to hundreds of people on Wednesday to keep families fed during COVID-19. Marking their tenth drive-up food distribution event, the venue provided a large space for the hundreds of visitors.

“Once the state and city of Pittsburgh started putting limits on the number of people who could gather in certain places, that’s when we really started to look at ways that we needed to modify our work,” said Melissa Murray, the organization’s communication and public relations specialist.

The organization typically relies on locations like food pantries for distribution. When social distancing rules became implemented, the food bank had to come up with alternative solutions to keep visitors safe.

“We know we couldn’t do those safely and so the best way to serve people right now is to do that, really through their cars so we are having drive-up food distributions right now,” said Murray.

The standard drive-up food distribution works similar to a restaurant’s drive-through, only the window is replaced by a volunteer on the side of the driving path. After waiting in the lines, the driver can then open the trunk of their vehicle and the food bank volunteers will load a box of food into their trunk.

For the food bank, it was not easy to develop the formula for a successful “drive-up” food distribution.

“The drive-up distributions have definitely been a work in progress, but we feel like we are in a good place right now where we have kind of got the hang of things and we are able to find more places outside of Pittsburgh where we can serve people as well,” said Murray.

Workers across the nation have been displaced from jobs, either temporarily during national Stay at Home orders or permanently laid off due to financial problems caused by the crisis. For some, this meant the end to an income, making buying food a potential challenge. This resulted in a surge of people headed to food distributions.

“One of the challenges, of course, is finding a space where you can have as many cars as you are anticipating,” said Murray.

Murray explained that a build-up of cars had spilled out onto traffic at one of the earlier drive-up food-distributions, which was held at Kennywood Park.

“That traffic backed out onto Route 837 in Duquesne by the food bank and that was a challenge,” said Murray.

Another problem that the food bank has worked to overcome is determining how much food to bring for each distribution. A standard produce to people distribution for the food bank holds a few hundred people in one location at a time. In the midst of the COVID-19 pandemic, this has not been the case.

“We had one outside of PPG Paints Arena about two weeks ago and we had enough for 1300 cars but had to turn several hundred people away, so finding that number is dependent on how many boxes we have available but also sort of a guessing game in terms of how many people do we think will come out and how many people can we serve.”

Despite all of these challenges, the food bank has continued to try several different methods that result in success.

“We’ve been testing out some different locations and seeing how we can best serve people, in terms of not only the location but the number of food boxes that we are bringing and parking and things like that,” said Murray. “Just kind of taking a look at how many food pantries are in the area and how many people do they serve and what can those pantries tell us about how many families they see each week or each month so just kind of gathering information from a few different places to do what we can to meet that need.”

The attempts lead to success at the Pittsburgh International Airport, with the food bank having more than enough food to serve everyone who arrived.

“We were prepared to serve up to 1,500 cars and we actually only served just over 800. So we served 812 vehicles but we needed space for 1,500 cars in case that many were to come and actually even more than that,” said Murray.

In terms of getting the food to provide, the food bank has also had to completely change their approach as to how they get what they need.

“Most of our food right now is purchased. Typically we have food coming in from people who are doing food drives and donations and things like that and we can accept that food but, right now we can’t safely determine whether that food that people are donating to us is usable so we can’t accept food donations right now,” said Murray.

With grocery stores seeing less food in their inventory than usual, the food bank and said stores now have to compete with one another to get food from distributors.

“Trying to buy that food at a time where you go to the grocery store and there’s not necessarily as much food on the shelves as you are used to, we are now having to compete with these grocery stores to bring in food,” said Murray. “One of the challenges with that is they’re able to pay a lot more for food than we are.”

The Greater Pittsburgh Community Food Bank perseveres through that challenge and finds a way to fill the boxes at the end of the day, even with the help of government commodity food.

“Right now luckily our food supply is strong and we are getting a lot of that government commodity food which has been really helpful,” said Murray.

Murray says that in these uncertain times the goal of the food bank branches beyond providing food to the community.

“It’s not only these emergency food distributions, it is finding a food pantry in your neighborhood and getting connected with them or applying for SNAP if you need it, finding those grab-and-go meals at so many school districts have set up for kids,” said Murray. “We want people to understand there’s more than one way to get food if you need it.”

Overall, the community has remained positive throughout the pandemic and supports the actions of the food bank.

“It has been pretty incredible to hear the words of gratitude from people, even if they are just coming to a distribution and getting two boxes of food, you don’t know what that might mean to that person,” said Murray.

The Greater Pittsburgh Community Food Bank says that it is planning similar events to continue to provide assistance to families during these unique and confusing times.

“It is kind of a day-by-day thing for us so we do have a lot of distributions that we are almost ready to announce but not quite yet,” said Murray. “We do encourage people to keep an eye on our website on our drive up distributions page to get more information about those.

Along with the drive-up food distributions, the food bank will also be holding similar distributions at 1 N Linden St, Duquesne, PA 15110, every Monday from 12 p.m. to 3 p.m.