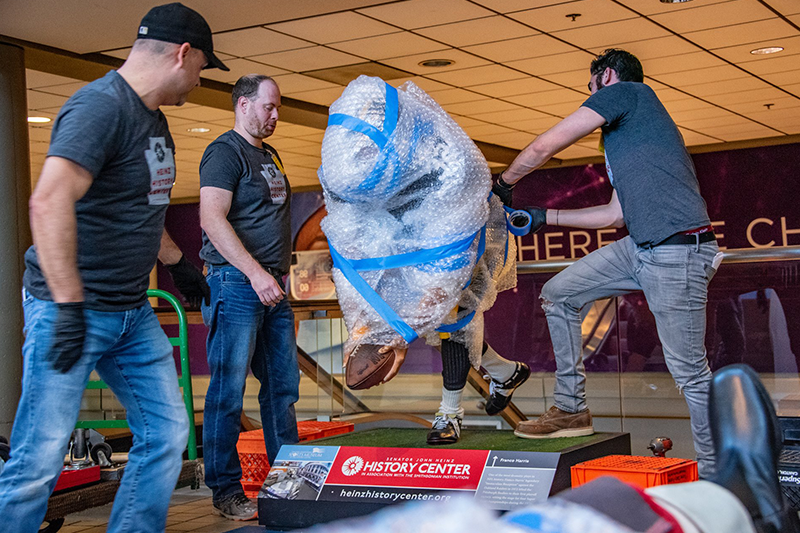 PITTSBURGH — The nation’s founding father and a famous Pittsburgh Steeler are currently missing from the Pittsburgh International Airport.

Statues of first president George Washington and former Pittsburgh Steeler Franco Harris have briefly been removed from the Pittsburgh International Airport to be refurbished.

The duo have greeted people to Pittsburgh from the Airside Terminal for more than a decade.

“Our passengers love George and Franco,” said Allegheny County Airport Authority CEO Christina Cassotis, “We love having them here as unofficial ambassadors of the region. We look forward to having them rejoin us here soon.”

The statues were removed March 15 and sent to the Senator John Heinz History Center where they will be reconstructed, updated and cleaned. The statues’ figures, arms and hands will be strengthened by Life Formations from Bowling Green, Ohio. The statues’ faces are also set to be repainted.

The statue of George Washington is of the president while he was still a British soldier, representing his time in Western Pennsylvania during the French-Indian War.

Washington’s partner, Franco Harris, was sculpted making an immaculate interception as a rookie, during a game that took place during the Oakland Raiders.

“Each year, millions of airport travelers are welcomed to Pittsburgh by young George Washington and Franco Harris – a couple of athletic, 6-foot-2, 22-year-olds who made history right here in Pittsburgh. With the airport set for a facelift, it’s fitting that our figures receive a much-needed makeover after years of love, adoration and thousands of selfies,” said Andy Masich, president and CEO of the Senator John Heinz History Center.

The statues will not be the only areas of the airport to be updated as the station as a whole is expected to receive updates in the future.