Students turn out to talk with RMU President Christopher Howard 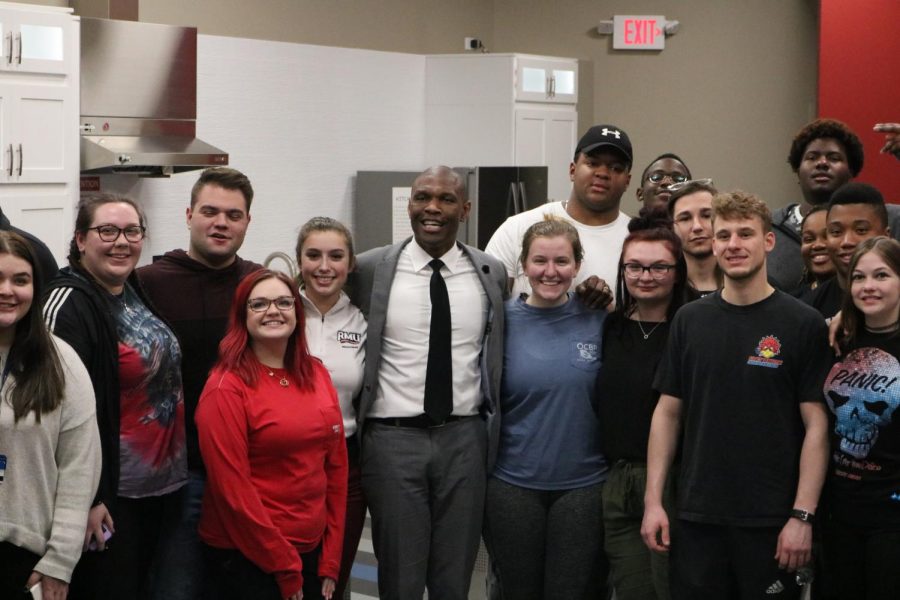 MOON TOWNSHIP — Students joined the president of Robert Morris University Dr. Christopher Howard to talk about what they liked about the college, and what they wanted to know all over a slice of pizza.

About 30 students attended Pizza with the President at the newly opened Yorktown Hall Kitchen on Monday night with intentions to have an open conversation with the leader of the university.

The event, which was sponsored by The Office of Residence Life, featured the president casually mingling with the students for approximately 30 minutes before opening the floor to questions, suggestions and comments from the students.

“I was very pleased with the student turnout for the Pizza with the President,” said Dr. Howard in an interview following the event. “The comments were heartfelt, they were witty, they were very caring.”

President Howard: “What did you find most surprising by your experience at RMU?”

“Because this school offers so much, you basically are only bored when you choose to be bored,” said a student.

Another student said they were surprised by the quality of the food and they enjoyed eating on campus.

The venue that played host to the event, the newly created Yorktown Hall Kitchen, was an example that Dr. Howard used to describe the advancement the university has made in taking in suggestions from students and capitalizing.

“We appreciate your comments, but we have some more work to do,” said President Howard.

President Howard: “What can we do better?”

The first student that responded to this immediately confronted the student enrollment crisis, staff layoffs and consolidation of schools at Robert Morris.

A student ambassador who works in the admissions department and gives tours to prospective students, says they do not have answers to give students and parents touring RMU.

“I didn’t have answers for them (prospective students),” said the student.

Dr. Howard responded with saying the news was hard to deliver.

“A couple weeks ago, it wasn’t the funnest press in the world.”

However, the president went on to explain the situation to students.

“Hmm, let’s take a look at this and figure out which school should be which school,” said Dr. Howard. “Not touching any programs of any degrees or anything.”

The president of RMU said that the school was working to consolidate schools in order to create financial savings, but no student programs or degree offerings would be affected.

“We had to make some financial changes, which is going very well,” said Dr. Howard.

According to President Howard, the flow of information was to be slower and more controlled, but he claims the press made it as a school was closing.

“I’m sorry this has been lumpy and bumpy,” said Dr. Howard. “Your programs aren’t going anywhere. Your programs, your degrees.”

The president went on to speak about how there have been layoffs at other large institutions, including Bayer and GM.

The message that President Howard wanted to make clear was that although it may be difficult now, the actions were in a move to make Robert Morris better in the end.

A student spoke about how the morale in classrooms was low. President Howard responded sharply said, “Their ability to teach you will not change.”

Another student talked with the president about how a few professors that they have in a class were disliked by the majority of their classmates, asking President Howard how they can deal with the situation.

The president encourages students to speak with the dean of their school if they have an issue with a professor.

The focus then shifted on the housing situation on campus as a student said they were frustrated, citing the building of the UPMC Events Center and student recreation center instead of additional housing.

“We’re a little smaller than we were a couple years ago,” said President Howard, speaking about the decline in enrollment at RMU.

President Howard discussed a construction plan that would have added new dorms to campus. The project was called Ridge Row, but the president says the project was scrapped.

President Howard spoke to RMU Sentry Media following the event, saying he is happy the students came out to speak.

“Students care about the institution, they care about each other, they want to make it better. They were direct with the president and they were very considerate.”

The president wanted it to be clear that through the consolidation of the schools, the elimination of staff and the realigning of the financial state of the school, no degrees or programs will be eliminated.

“I wanted to be clear that people understand that no degrees or no programs are going away as part of the consolidation,” said President Howard.

One reason the university is facing a difficult decision is the decline in enrollment. But President Howard said that RMU is a global institution, attracting students from around the world.

“We’re dealing with the demographics of western Pennsylvania,” said President Howard. “We are an international institution as you saw tonight, we had kids from McKees Rocks and from Mumbai, India. Nonetheless, we do draw a significant population from this area, and that’s a demographic that’s down 14.5 percent in the last five or six years.”

However, with the near completion of the UPMC Events Center, President Howard asserts the fact that the new arena will have good things to follow.

“I actually sleep in the UPMC Events Center, that’s how much I love it,” said President Howard joking with RMU Sentry Media reporter Gage Goulding. “It is going to be, it already is, generating so much buzz on the campus.”

Developers of the UPMC Events Center say the arena is something to be proud of, and President Howard is proud to say the building is being funded by outside money.

“You’re building a building you can be proud of,” said President Howard. “Using outside dollars to help fund this thing, and thanks to UPMC and People’s for being the big funders on this and the other sponsors.”

When the arena opens, President Howard is sure that the UPMC Events Center will be a place for athletic and institutional advancement.

“We’re going to have a facility that’s going to be great for athletics, great for students, great for faculty, staff alumni and great for the community,” said the president.

“This is an exciting chapter in the history of Robert Morris University and the best is yet to come,” said President Howard.