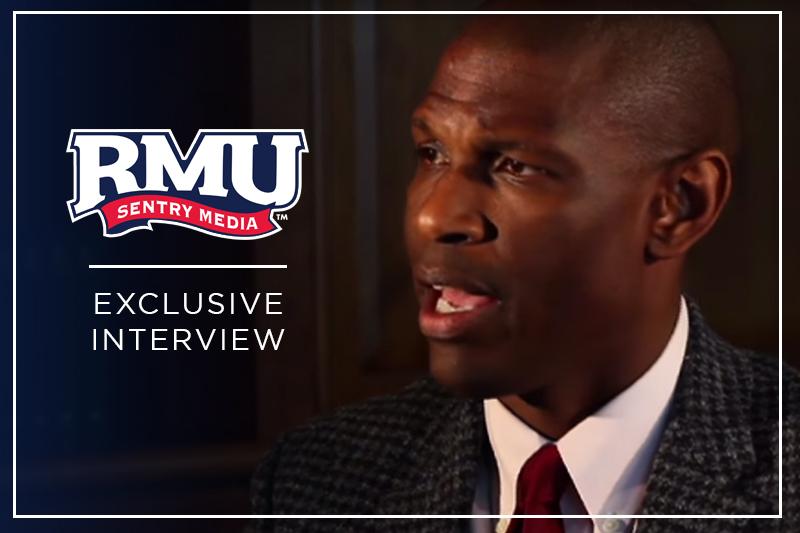 Five short months ago, Christopher Howard, Ph.D. was announced as the eighth president of Robert Morris University—now he has finished his first month at RMU. Howard began his presidency on Feb. 1 of this year and has since been busy, but he has enjoyed his time here so far.

Howard intends to propel the university forward and has an outlook on how he plans to do that. He has goals in place as well as plans to tackle student concerns.

Bringing an outsider’s look to RMU, Howard has ideas and goals for where he plans to take RMU. He believes Robert Morris to be an “all of the above university” and wants to use that to his advantage.

“There’s a great quote by this American writer named James Baldwin. He says, ‘Let America be what America must be.’ So, let RMU be what RMU must be…,” said Howard. “So let us be keen to provide great opportunity for students that are just delighted to have the opportunity to come to a place like RMU. Let us be a place marked by excellence with our top performing students, athletes, our alumni, etc.”

He wants RMU to be a place for all students including athletes, full-time, part-time, online, and doctoral. Providing opportunities for all students is important to Howard, but he says it’s still early yet and he has plenty of listening to do.

“One of the first things I want to do is get a Ph.D. in RMU. So I’m doing just as much listening as I am talking, as well.” said Howard.

In an email Howard sent out on his first day that he plans to continue RMU’s story by writing the next chapter. But, he doesn’t plan on doing that alone.

“Well it starts internally, we can never forget the most important audience is the internal audience. It’s the students, it’s the faculty, it’s the staff, it’s our alumni…,” Howard said.

The story will be told through interviews, his social media, his blog and the RMU webpage. He has already began telling the next chapter through various outlets set up by his marketing team. He’s been on local radio, television and in newspapers. Howard even has a piece out in the New York Times online edition.

Howard plans to listen intently and provide a sense of where he thinks RMU should go, but hopes that the Robert Morris family never forgets one thing.

WOMEN IN THE TWENTY-FIRST CENTURY

One of Howard’s first acts as the president was signing the American Council on Education’s “Moving the Needle” pledge in an effort to have half of all college and university chief executives be women by 2030.

Although Howard came from the all male Hampden-Sydney College, he has plans to empower women at Robert Morris.

“The good news is, it started before I got here. President Dell’Omo and the leadership of this institution, (and) the alumni have done a great job promoting and empowering women… I want to build upon what’s happened before,” said Howard.

He had signed up to become a mentor next year for the Women’s Leadership and Mentorship program. He wants to continue encouraging women and note that RMU will be a place “noted for empowerment.”

Part of the focus for Howard’s speech for his inauguration on Oct. 7, 2016 will be empowering women. Later in the evening, a panel discussion will be held with important women in today’s society talking about enabling women in the twenty-first century and their own successes.

President Howard believes that the new event center is the right next step for RMU. He, along with the Board of Trustees, is thinking about a “mini comprehensive master plan.” The previous master plan was completed in 2007 with many of the proposed projects outlined being accomplished. Howard thinks the event center deserves its spot on the new master plan because it will be a place for everyone. He also has other intentions for the current master plan.

“An event center, a place for students also to be able to gather and do intramurals and things of that nature,” said Howard. “I’ve been talking with the dean of the School of Engineering, Math, and Science as well as our provost, Provost Jamison, to think about what we need to do with SEMS as well. So, I’d like to think of it as a continuum.”

With the recent construction of the Scaife Hall, the new nursing building, all of the schools besides SEMS have gotten a “facelift” in recent years. As far as the order of things, Howard said that it will be a sequence of events based on proper funding.

“Which one’s going to come first? Hey, you’ve got to be somewhat opportunistic. If the funding for the event center, per say, comes through first, realize that me, as the president, the senior leaders of this institution and the board are thinking holistically,” said Howard. “We’ve got to kind of follow the money to make sure we get the places done in a fiscally responsible manner.”

Howard admitted that this is a “high class” problem. He said that before his time at RMU, there was a modular plan laid out to build more housing and it has been put in place, but it takes resources to make sure everything is funded properly.

The president and the board just need the money rights to build since they do not want to be “fiscally irresponsible.” However, the university as a whole is aware of the housing issue and have a method to combat it.

Although Howard doesn’t have a specific plan in place for food on campus, he is always listening to be tuned into what students are talking about. His relationship with the food services people is strong and he will communicate concerns brought forward by students.

Many students have been complaining about the university Wi-Fi, Resnet. The wireless network has consistently been a problem, but Howard is aware of the issue.

“Before I got here, thanks to President Dell’Omo’s leadership and a very able senior cabinet, that issue has been identified by the folks in IT and the business office,” said Howard. “Alan, who leads that department has looked at the feedback and taken very, very clear steps to make it better. And what we’re hearing from the students and it is getting better.”

Overall, President Howard is looking forward to leading the university. He has come prepared and is ready to begin his legacy at Robert Morris.