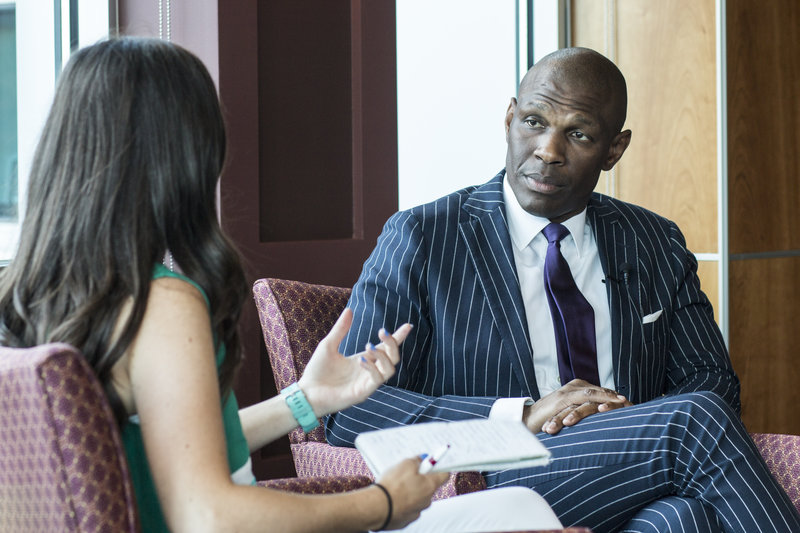 After a jam packed summer, the eighth President of Robert Morris University, Christopher Howard, Ph.D. is ready to welcome students home for another great school year. He himself is also ready to learn about RMU and what the university has to offer.

“It’s been a terrific summer, personally and professionally. One of the things when you come to a new organization, you really want to try to get to know it and what I’ve been saying in different venues is that I want to get my Ph.D. in RMU,” said Howard.

The Board of Trustees was able to meet this summer and according to Howard had some of the most “high quality” conversations in a long time. The president felt this was a great way to help him figure their vision for RMU and understand how they think.

A leadership council event was held with 19 of RMU’s top leaders including vice presidents, deans, and two student leaders who were representing student organizations on campus. Two days were spent discussing what the university values and how leaders plan to manage, lead, and build their strategy.

Howard brought in someone from the Aspen institute to moderate a conversation about RMU’s values. He also brought in a few people from his past.

“I brought in—and this is scary—two of my former professors from Harvard Business School, to moderate conversations. And it was really really special,” said Howard. “I was nervous as can be because I felt like I was going to get graded again.”

According to Howard, the event was a success and all the leaders have a sense of what they want to do next. Not everything is worked out, but things are headed in the right direction.

Before officially coming to the university this school year, the students and faculty were able to get a teaser from Howard’s presidency when he started in February of this year. As for what to expect for this upcoming school year and beyond, the president says he is in it with everyone.

“No one does it by themselves. I’ve been very very big on sharing the basketball. We’re going to do this together; we’re going to discern what this is together,” said Howard.

He want everyone from himself to staff, faculty, students, alumni, etc. to have a say. Some ideas that were discussed during the leadership council event have changed his way of thinking and are different than what’s currently been done.

The mission and strategic plan is being taken into consideration by Howard with engaged learning, transforming, building great careers for students and putting those students on a path that sets a foundation for the future.

“I’m really excited about this idea of preferred partner. Robert Morris is the preferred partner for corporations, organizations and professionals in the region. There’s something about what we do in terms of how we interact with companies and nonprofits,” said Howard.

Howard plans to talk about what it means for RMU to be a preferred partner and his plans to enact it at his inauguration which is Oct. 7, 2016. His inauguration will kick off homecoming weekend and focus on RMU.

The inauguration will begin with each of the schools highlighting their stories and coming together to tell Robert Morris’ story—telling their narrative. There will be displays around the Charles L. Sewall Center for people to walk around and see what RMU has to offer.

Howard’s inauguration will also focus on empowering women to lead the twenty-first century with many women speakers and a women’s panel moderated by Howard.

Follow RMU Sentry Media’s coverage of the eighth president’s inauguration on and before Oct. 7.

Many students, athletes, faculty and staff have been wondering about the new events center that has been talked about since before Howard’s time as president. Due to his time in the being an intelligence officer in the Air Force, he would secret codes. His code for the events center was: “codeword game changer.”

“It is going to be a game changer because it’s going to take a top tier Division I Basketball program, which is envy of the country,” he said.

Howard is excited that men’s basketball coach Andy Toole’s program will have the “appropriate stage,” as well as the women’s basketball and volleyball teams. He thinks it will be a logical place for people to do things on campus and for people in the community.

“It’s going to be great for faculty, staff and students and in whole our community because even though Sewall is a nice enough facility, this going to be cutting edge, state of the art, and the plan is to have a conference center in there, which will also serve the community. We will be able to do more things around concerts,” Howard said.

This multimillion dollar project is not ready, but a decent amount of donations have been made and the university is hoping to make an announcement in the near future.

President Howard is excited for what the future has to offer. He’s looking forward to living in Pittsburgh and supporting the Colonial family.