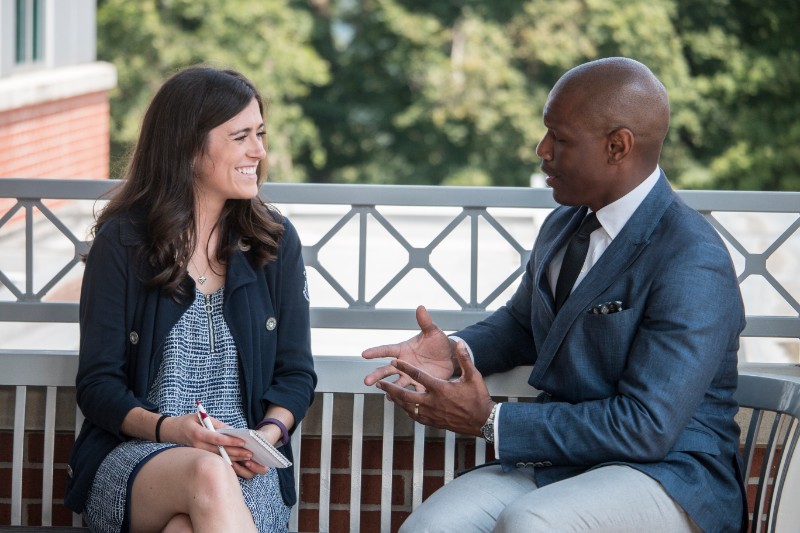 Robert Morris University’s eighth president, Christopher B. Howard, sat down with RMU Sentry Media to talk about the upcoming 2017-18 academic year on Aug. 21.

President Howard talked about his plans for the upcoming year. He hopes to keep his implementations from last year and improve some new areas of campus. The major improvement he hopes to make is an increase in RMU’s endowment to compete with other schools.

“I think we have to pick up our fundraising and our endowment. We do well in virtually every measure compared to schools that are like ours,” said President Howard. “In terms of endowment, we kind of punch below our weight in that regard. And so, and my wife and I, we’re committed to supporting this school financially because we love it. I didn’t go to school here, but I still give money to it.”

Other areas of campus that are changing are the addition of the UPMC Event Center and Student Recreation and Fitness Center. Although, students have noticed that the Charles L. Sewall Center is still standing when it was expected to be worked on over the summer.

“This is a wonderful project for the university, the event center and also student recreation center, the largest, most expensive capital project we’ve done in our 100-year history,” President Howard said. “We will have, in early September, all the government stuff done, we’ll go out to the market place and get the final funding taken care of…and so by the end of September, you won’t see Sewall standing.”

Along with the new construction of the Student Recreation and Fitness Center came a student fee. In the 2016-17 academic year, students showed mixed reactions about the fee for the facility. President Howard ensures that students voted overwhelmingly to allow the fee to be able to afford the new center.

“I thought the most important thing would be to listen to the students and say, ‘What do you think?’ And they voted overwhelmingly, overwhelmingly to say that would be okay,” President Howard said. “In fact, even when I was speaking to the bankers, I told them that our students stepped up and said you know we want to do our part.”

While students are doing their part, President Howard was pleased with how his first year of his presidency went. Graduation retention rates have risen along with RMU’s spot as a preferred partner for organizations.

“I think it’s the relationships I’ve been in and make with people. You know Pittsburgh is a wonderful space and place and Robert Morris is a wonderful space and place that has its own culture, its own history, its own vantage point, but I feel like I’m fitting in, like I’m one of the yinzers,” President Howard said. “Robert Morris has always been tethered to the corporate business world being a school of accountancy going back to 1921, but now we take it to the next level.”

For more information with President Howard, check our RMU Sentry Media’s Facebook Live session where we asked him questions from RMU students.