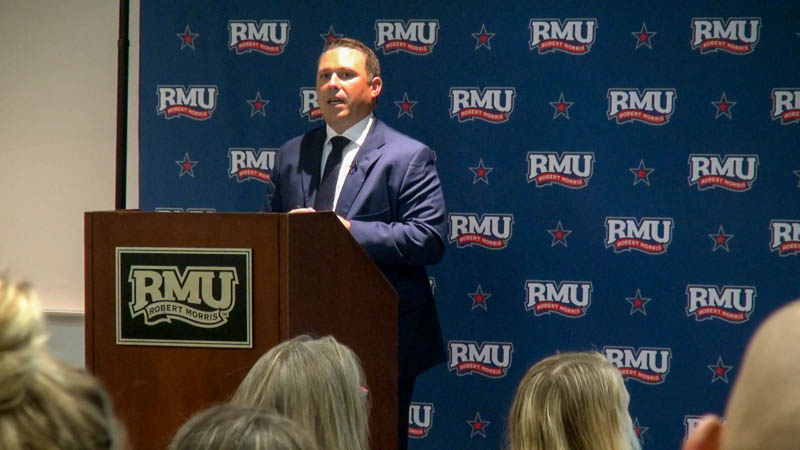 Pittsburgh native and the president of the notable fast food restaurant Arby’s, Rob Lynch was on Robert Morris’s campus on Tuesday to speak with over 150 students who filled Hopwood Hall to the brim of its capacity.

Lynch took the audience through his entire career leading up to becoming the president of Arby’s.

Lynch started with his college days where he earned his MBA at the University of Rochester. Continued through his time at Proctor and Gamble, Heinz and Taco Bell before discussing making the move to Arby’s.

Lynch was integral in the rebranding of Arby’s to their notable “We have the meats” campaign in which Lynch said the company was trying to show consumers that they were more than just their famous roast beef sandwiches.

The main motivations behind this rebranding came in the three points which Lynch discussed during his speech:

1. Believing in your brand

3. Have a willingness to be bold.

Lynch’s talk was filled with humor as he talked about the many bold decisions made by Arby’s to revamp their brand while competing with companies that invest significantly more money in advertising.

Some of which included: a farewell commercial to Daily Show comedian Jon Stewart, who mercilessly mocked Arby’s throughout his time on the Daily Show, and a one-day-only vegetarian special in which customers could pay full price for just the bun.

Lynch finished with the display of the company’s newest branding campaign and how it is an expansion of what they started with “We have the meats” four years ago.

After his hour-long talk, Lynch opened up the room to questions as students eagerly tried to get their question in to the Arby’s executive.

“It’s great to come here and see so many engaged students.” said Lynch. “Frankly, the questions were great. You could really tell the students were engaged and cared and was listening.”

The event was organized by the dean of the business school Michelle Patrick and sponsored by the American Marketing Association.

AMA president and senior RMU student Emily Nobers discussed how they believed this event was a total success.

“We had a great turnout with about 150 people who showed up,” said Nobers. “I think it’s great to have a speaker that not only was working in the Pittsburgh area, but nationally, and Arby’s is such a large name so I think it’s really good to have.”