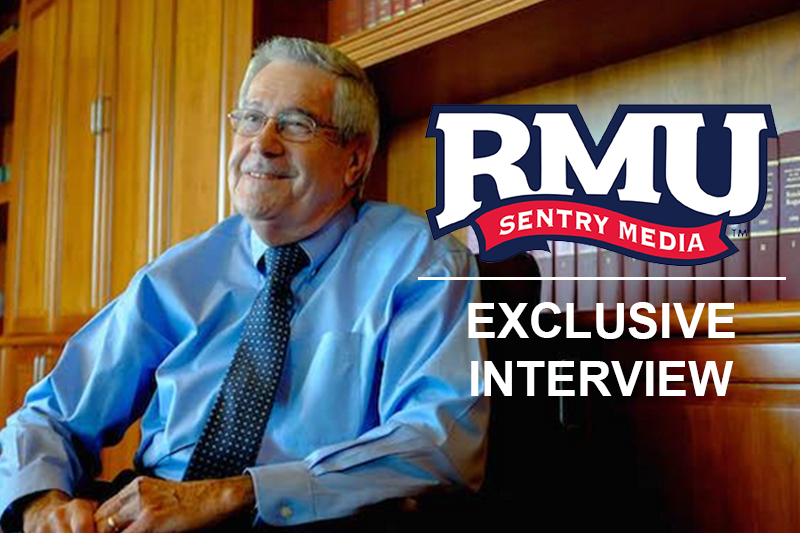 David L. Jamison, J.D. is back for another year as RMU’s provost and senior vice president of academic affairs.

With many changes coming to RMU this year, Provost Jamison discussed new projects, faculty diversity and how the university plans on hiring after the restructuring done over the summer.

“We’re (RMU) big enough to have the resources of a university, but we’re small enough to feel like a small college,” said Jamison.

Last academic year, Jamison was interim president, as well as provost and senior vice president of academic affairs. Now, he has returned to his position and is happy to be back.

“It’s a lot better to be able to concentrate just on one job,” said Jamison. “This is a job I’ve had since 2008, so I feel like I can now support President Howard in just the best way possible by being back here.”

The university was able to get see a brief foreshadowing of Howard’s presidency when he started in February 2016. Jamison said he believes that those few months were just the beginning.

“He is going to have an extraordinary successful presidency, I believe,” said Jamison. “He has breakfast and lunch with some influential, important person every day and I get an email from him saying ‘follow up on this’, so the thing that he brings to us at Robert Morris is natural connections.”

President Howard also wants to bring diversity to the University, and Jamison is a large supporter of the new plan.

“I wrote the first Faculty Diversity Hiring Plan. It’s always been a part of what I believe in really strongly,” said Jamison. “Faculty diversity, student diversity; not just color, but also background, where people come from, their credentials that they have.”

The new faculty being hired is for all the new academics being added to the university and majors like Criminal Justice and Counseling Psychology are getting added, among others. These are being implemented quickly and are already taking off with the student body.

Over the summer, 14 jobs were terminated but seven new faculty members have been hired. The President and Provost wish to hire seven more to fill all 14 positions when the budget allows.

“We had one job in engineering that we filled and one we’re going to fill next year,” said Jamison. “We had 35 applicants for that position… We leave it to the Dean and the faculty to find the right person.”

The newest building is the Scaife Hall for the School of Nursing and Health Sciences, but the University is looking at making John Jay a better building for the School of Engineering, Mathematics and Science, which is the fastest growing school. There is a plan to also bring a new event center to the campus.

“They’re out there exploring how much money we can raise for it (event center). We don’t want to take student tuition,” said Jamison. “I feel strongly about this. We’re not going to take student tuition to build the event center. If we’re going to build it, it will be done on basis of donations we get and people who want to support athletics or support the University more generally.”

The Provost said is very excited for the upcoming year and all the activities students can participate in. With about 880 incoming freshman, many events are being planned.

“Take advantage of opportunities,” said Provost Jamison. “We want you to be engaged in your own education, so take it seriously and be engaged.”