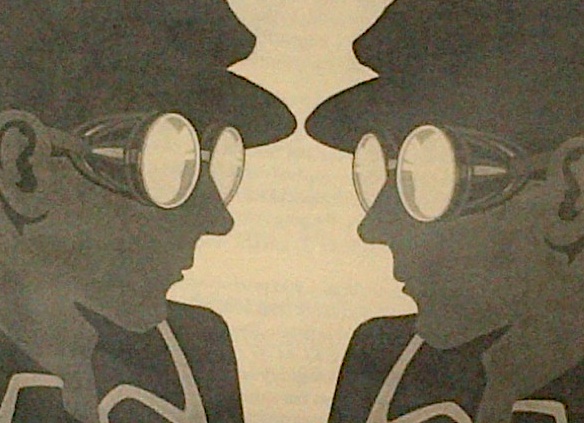 Robert Morris University’s Colonial Theater recently put on the production of “The Servant of Two Masters.”

“RMU is doing an Italian celebration this semester, and we decided we wanted to do an Italian play and at the same time. . . . Since we have had RMU Colonial Theater back on-campus, we have not done a period piece; we haven’t done an old piece at all. Those two things coincided with putting on an Italian play written in the 1700s,” said Barbara Burgess-Lefebvre, director of the play.

The plot is pretty impossible and is very dense.

“In short, it is about a crafty servant who decides he can make more money and get more food if he serves two masters without them finding out and what happens when he tries to do that,” said Burgess-Lefebvre.

There was a slight twist to this time period piece. The play was set to a steam punk style, which is set around the branch of science fiction-fantasy that features Victorian-influenced technology and fashion. Also, the play was a play set within a play and included improvising from the actors.

“I am really intrigued in the design elements we have put in the show, which is the steampunk idea that may not read or make sense with a contemporary audience. But we wanted to pick a design style that would be exaggerated, fun and ridiculous. I am excited about that because it makes it a very different production of ‘Servant,’” said Burgess-Lefebvre.

A production usually allows the audience to walk away with something in the end.

“I hope they have a good time and some laughs. That is what the nature of this play is really about. There is no greater message necessarily. There is no lesson to be learned it is just for fun,” said Burgess-Lefebvre.

Finding the comedy is considered to be the most difficult aspect of the play.

“This is an old style of comedy. It relied a lot on improvisation and over exaggerated acting, and that is something that we have not done a lot of here. So, it is a challenge to train actors who are used to working very realistically to work in an exaggerated style,” stated Burgess-Lefebvre.

Due to the improvs, the show was slightly differnet each nigh it was performed from Wednesday, Nov. 9 through Sunday, Nov. 13.

“In my opinion, the play was very quirky and weird. At times I didn’t know when it was starting and when it was ending. I can say that I was not thrown off by the plot. I figured it out right away. There were also a lot of sexual jokes that were thrown in randomly. Overall, the production of “The Servant of Two Masters” was very interesting to say the least. I had chosen to see it because the last time I had been to a play I had to for my Humanities class. The fact that I chose to go on my own makes this production worthy in itself. The character Truffaldino was outstanding and personable. He was great for the part. At the end of the day, it was a delight to watch.” – Kristal Wiggins

“It was funny and refreshing. There were sound difficulties, but the actors made it smoothly slide by with their charming performance.” – Kayenat Hamid

“Very different. The play in a play was kind of confusing. It did make me laugh, which is always a plus.” – Casey Poindexter

Did you see “The Servant of Two Masters?” Tells us what you thought of it in the comments section below!