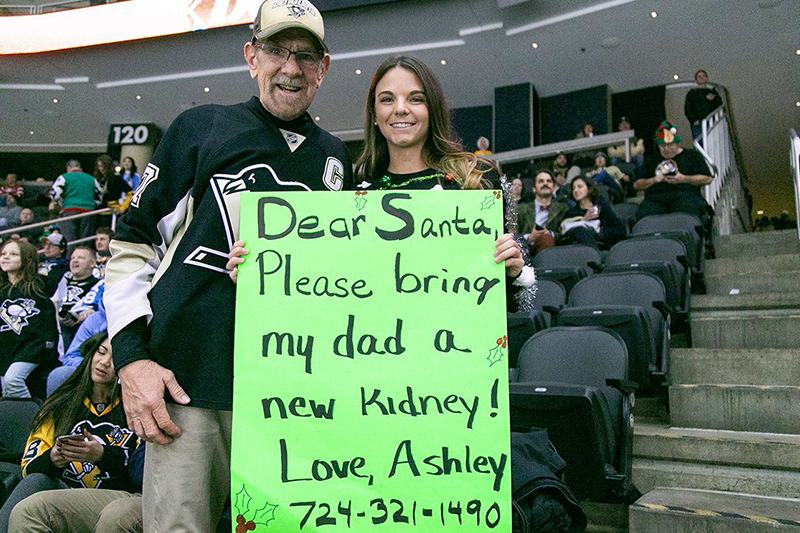 MOON TOWNSHIP – A Robert Morris University alumni asked for the communities help in his search for a kidney at a Pittsburgh Penguins hockey game.

Dave Pritchard, a member of the Robert Morris 1985 graduating class, held a poster with his daughter, Ashley Pritchard, at a Penguins game. The father-daughter duo’s photo was posted to the Penguins Twitter account and went viral, garnering more than 2,300 retweets.

The picture has the pair holding a poster that reads “Dear Santa, please bring my dad a new kidney! Love, Ashley.”

Penguins fan: Seeking holiday miracle.We've found a donor before… Can we find another hero to make this fan's Christmas wish come true? pic.twitter.com/hB3lURZk6j

Robert Morris University acknowledged Pritchard as a member of the 1985 class in a tweet on Wednesday. The university tweeted encouraging their followers to see how they could help.

Did you see this photo from the @penguins?That's RMU alum Dave Pritchard '85 and his daughter Ashley. He's in search of a kidney.Check out their story and learn how you can help: https://t.co/DxkTEknwqM pic.twitter.com/QTonFGQAis

According to TribLive, Pritchard received a kidney transplant in 2006. The kidney that lasted Pritchard 12 years is now in need of replacement and that’s where the picture comes into play.

Anyone interested in signing up to see if they qualify for a donation can visit the UPMC Living Transplant website.

Pritchard is blood type A-positive. Anyone with a match is encouraged to contact the family directly at 724-321-1490.