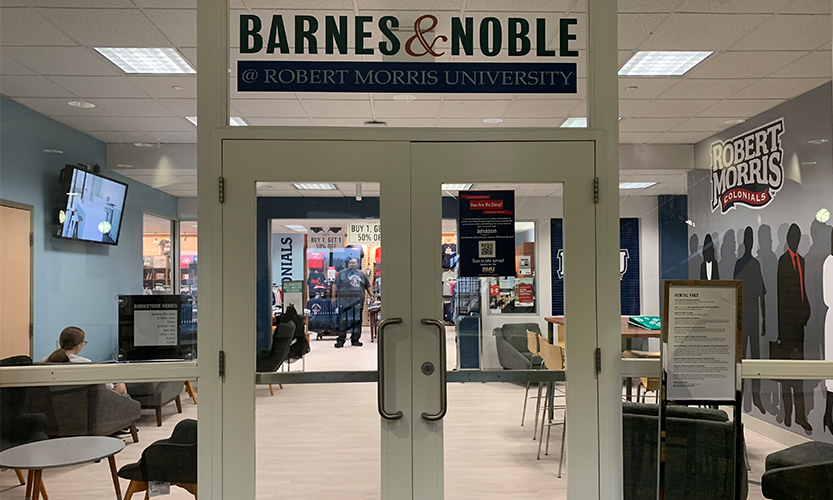 MOON TOWNSHIP – Finishing touches have just been added to the RMU bookstore, completing the store’s renovations.

The project, which was funded by Barnes and Nobles, started on March 4 and continued on through spring break. The bookstore boasts updated flooring and graphics, as well as new apparel.

The lobby area now has new furniture, including cushioned chairs and a more welcoming study area. Store manager Lindsey Erisey is especially enthusiastic about the new flooring and color scheme of the space.

“The floor was the most notable part of the room,” said Erisey. “The light color really opens up the space and makes it look so much brighter, and it looks bigger.”

Construction was complete within a two week period over spring break, while the installation of the new graphics were finished on April 8. The bookstore was open for students and visitors throughout the renovation period.

“I think it just makes the space pop,” explained Erisey. “We worked with the public relations department on campus to make sure that we were sticking with the theme. By adding the Robert Morris logos, I think we accomplished that.”

One of the main goals for the project was to make improve the store’s visual appeal. The renovations included adding a new wall which features general merchandise, spirit clothing and hanging space for various items. More hanging space was also included to help customers find what they needed.

As for RMU gear, the store updated Under Armour and Champion apparel. This included an expanded women’s line and more outerwear. Erisey tells students and visitors to expect new things as more apparel is making its way over soon.

“Expect new things often,” said Erisey. “We try to spice it up and change things every couple of months because you don’t want to see the same thing over and over again.”

Previously, infant and pet apparel was smaller and scattered, but the store updated the section by dedicating a larger and more specific space for that type of merchandise.

So far, Erisey is satisfied with the new look and is excited for students to enjoy the space.

“I hope everyone comes to visit the bookstore so they can see and give us their feedback,” she said. “It’s a great space to hang out now.”