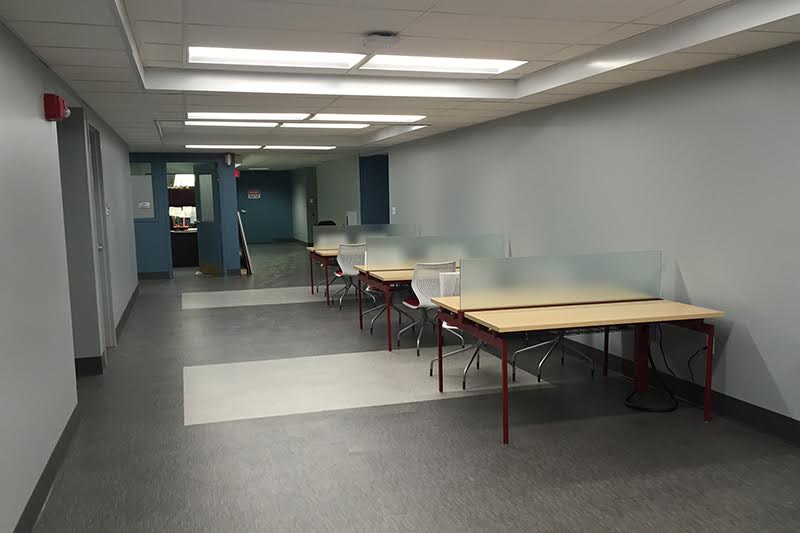 Over the summer, construction began on the Patrick Henry Building at Robert Morris University. Now as construction draws to a close, students and faculty can put the new alterations to use.

“I think everybody knew that there needed to be a face lift to take place here in the Patrick Henry area,” Dilauro explained. “It was one of the oldest buildings on campus. It essentially was an eye sore.”

As far as interior renovations, originally the media department’s radio station was tucked away in a back corner. After the renovations, it has been moved to a more prominent area right across from the main newsroom and next to the television studio.

“It’ll be a much better showcase and tourist spot,” Dilauro said. “It really is a showcase for anyone that walks through here.”

A lot of interior design work has come from the university project planner, Karin Martin. Martin’s inspiration for a lot of the design was that she wanted students to have on campus what she couldn’t when she went to college.

Martin explained that they wanted students to have more relaxing areas on campus where students can get away from their dorms and classrooms.

“We’re trying to make your life better and get more areas for you to either hang out or to study,” Martin said.

Aside from reflecting just what the students need on campus, Martin wants to make sure the changes to the campus make students relaxed and focused.

“I like doing interiors,” Martin said. “And picking out furniture and trying to think back on when I was younger what I would’ve liked to experience.”

Vice President for Marketing and Public Relation and Alumni Relations, Kyle Fisher, has also worked diligently to get the Robert Morris name out to public. She is responsible for working with the fabrication and installation of major university-wide signage, wayfinding and branding spaces.  Her department also worked with the tenants of the buildings or spaces and many other architects and designers. She explained that recognition is not about beauty and popularity, but more about frequency, repetition and consistency.

One way her department has increased visibility for the university is through the big “RMU” sign on Yorktown that recently went up. The sign is currently tied with Penn State for the biggest college logo.

Fisher also mentioned that the changes in the Charles L. Sewall Center such as putting up the wall decals has given the university an image and shows how passionate the school is.

As far as the academic side of construction, Vice Provost for Academic Affairs, Dr. Lawrence Tomei, has taken the reigns to make sure students have their needs taken care of.

“I try to represent the academic interest in the facility upgrades that are going on so I work very closely with the facilities folks as they consider upgrades to classrooms, offices, study locations, pretty much the academic services side,” Tomei said.

Tomei broke down the whole process it took for the renovations from the School of Business and Wheatley Center to the new nursing building, Scaife Hall. He explained that the university has plans to make changes to the John Jay Center once the nursing building is completed as well.

Tomei was also very excited about the changes in the library and Hopwood Hall.

“We upgraded the library,” Tomei said. “That was a major upgrade to an academic facility for us. As you can tell by walking around the library the students just love that facility.”

“Hopwood Hall was not one of the greatest teaching facilities on this campus,” Tomei said. “It’s a beautiful place. We’re very proud of the work the facilities folks took care of for us over the summer and Hopwood Hall is beautiful.”

Tomei also wanted to address the new area added above the library called CITADEL, where students can go to study or work on group projects.

new event center so that the Sewall Center and John Jay Gym are more open for sports. Renovations will continue taking place throughout the year.