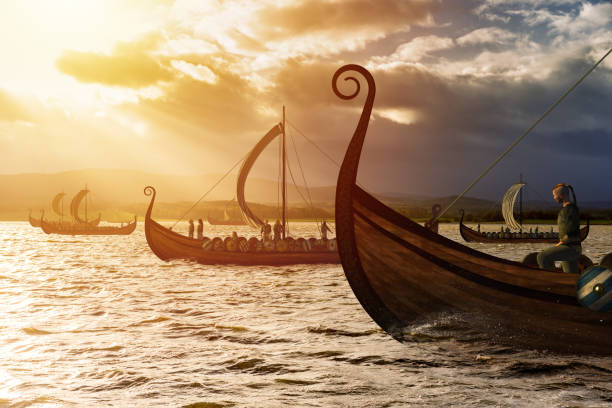 MOON TOWNSHIP — Barbarians: a word that conjures up so many vivid images and thoughts of men going out and destroying villages, burning, killing anything within sight. The idea that Vikings were bloodthirsty, violent pagans with no sense of society is a narrative that has remained throughout history, from Ancient Greece to Modern America. Dr. Soren Fanning broke down these age-old stereotypes and misconceptions with his Virtual RMU Barbarians Round Table held on February 23.

Fanning led a conversation on the truth of barbarian societies, the roundtable looked to inform Robert Morris University on the niche culture persecuted by history books.

Dr. Fanning started the presentation and open discussion with the history of the word “Barbarian.”

It is an ancient Greek term that they used called “Barboroi,” which meant anyone who was not Greek. It has always been used as a term to hurt or dehumanize and classify certain groups of people who lived nomadic and semi-nomadic lives on civilized society’s outer fringes.

Dr. Fanning addressed first the infamous Vikings from the 10th and 11th centuries, waging war and conquering lands as far as their maps could cover. In this conquest, English monasteries were easy targets.

Vikings going out and raiding was only a fraction of what actual Norse society was. They were just like any other society, with most Norsemen, or “Vikings” as they were called, serving as merchants, sailors, and craftsmen.

Fanning explains that Vikings in Medieval Europe conjured up the notion of everything that scared medieval Europe because they were not Christian and thought to be godless heathens. Through propaganda, they were marginalized solely because of a small minority group who committed violent acts.

Contrary to popular belief, these barbarian pagans were some of the forerunners for modern democratic institutions today. Vikings were allowed to divorce, and the reasons for it could be the old nordic equivalent to the modern irreconcilable differences. It could be instigated not just by men but also the women.

Dr. Fanning emphasized heavily in his presentation that some of the first gender equality roles in society and government came from barbarians like Vikings and the Mongols.

Vikings cannot get all the credit because another group created a law code, almost the modern equivalent of today, but how they conquered their empire is undoubtedly contrasting. This forward-thinking society was the Mongols, and more specifically, Ghengis Khan.

Ghengis Khan is a Mongol who conquered from China to Hungary, that’s how far the Mongol empire stretched and how obtained that land was no less barbaric. When encountering a new city or region, they would ask them to submit. They would all be spared and given rights within their society, or they would be forced to submit by violence and pillaging.

If the invaded territory submitted, it did not matter if they were Hungarian and did not speak their language, these regions became a part of their society. Mongols had a multi-ethnic, cultural, religious and linguistic society because of their conquering.

Since the Mongols were very nomadic, they did not have time or resources for industrialization and specialization. They would take someone who knew engineering, math or science and use their technology towards the advancement of Mongol society. It did not matter where you came from or the language you spoke. You were a citizen and your skills were valued. Not my nobility, but by practicality.

Women even ran the government systems back in the homeland while the men went off pillaging and finding new lands. These nomadic societies, where there was not much of a leisure class, created a community system based where everyone pitched in to better the community. Gender roles were not that much of a problem because both men and women learned to cook, fight, clean, forage and hunt.

Dr. Fanning called the Mongols, if you looked past their tremendous body count (15 million), “Woke Barbarians.”

He discussed a story where a Mongol Princess would only marry a man who could beat her in hand-to-hand combat. She eventually married, but only because she liked the guy so much, she let him win.

Dr. Fanning describes numerous contributions the Mongols alone have contributed to society and, most notably, a postal service they developed to send a message from Europe, Asia, and Africa. A message could be sent out and received within ten days in their speedy system.

In his one-hour presentation, Dr. Fanning knocked down stereotypes that were centuries old and propaganda to show these “uncivilized” societies have significantly contributed to the foundations and institutions we see today around the modern world.