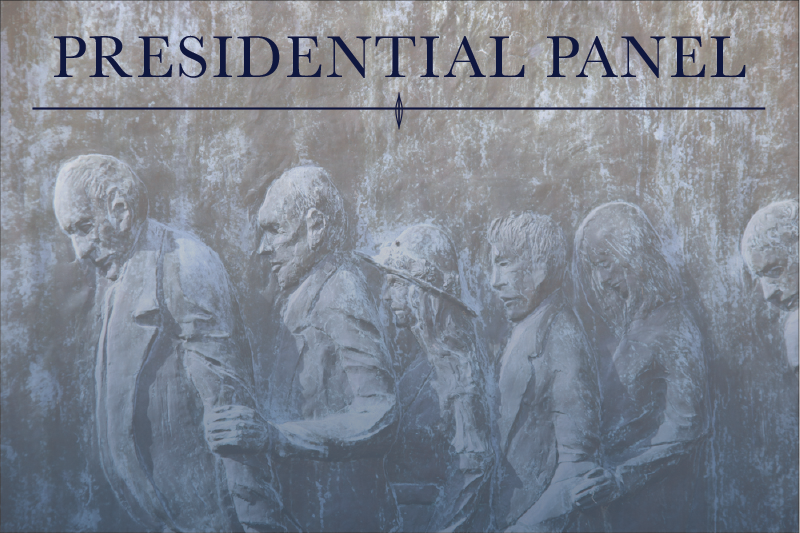 On Jan. 18, the panel met in the Sewall International Suite. The speakers were hosted by the university’s Honors Program, which called the event “The 2016 Presidential Election in Retrospect: A Panel Discussion” and said it was intended to look back on the election and “what it all means.”

“Trump appealed to economic interests, first of all,” said Watson, a professor of politics and author of “Living Constitution, Dying Faith.” Watson said Trump also appealed to cultural interests because of his personality: “He just seemed like a tough guy.”

Sweet-Cushman, an assistant professor of political science, agreed that his message appealed to rural voters’ interests, but argued that his presidency could negatively impact women’s issues.

Robert Morris University’s Philip Harold, co-director of the university’s Honors Program, introduced the speakers and also moderated the discussion, posing questions to the speakers to which they could openly respond. Topics included the electoral gender gap, the media and party reformation.

The speakers were able to agree on certain facts, such as the 13 percent voter gender gap between former Secretary of State, Hillary Clinton and businessman, Donald Trump. Regarding the cause of that disparity, Sweet-Cushman and Watson disagreed. Sweet-Cushman proposed that if you did not like Hillary Clinton, sexism played a role.

Watson argued that Democrats have trouble attracting male voters and that the gender gap is actually growing in favor of the Republican Party.

The debate continued when panelists discussed whether Trump played on voters’ xenophobia. “I think we need to, as Americans, think a lot more deeply about how we are understanding racism and sexism, and xenophobia as well,” Sweet-Cushman said. “We have a lot more of it than we’d like to admit … He played on some of those themes.”

Sweet-Cushman conceded that Trump voters can be upstanding members of their community, but she said that Trump played on a deeper part of their psyche.

Watson disagreed, saying, “I don’t think there’s any evidence that Trump is a racist … Trump has an intuitive sense of things … He says things which are pointing to, I think, real arguments.”

Later, Pappin warned that we should be suspicious of claims that Americans suddenly live in a “post-truth” political landscape. Pappin instead said that sites like Facebook promote stories tailored to individual tastes, and as a result voters have differing perceptions of the truth.

Pappin is the co-editor of an upcoming journal called American Affairs, which will reportedly provide intellectual explanations of Trumpism. Pappin was not available for comment, but the journal is expected to launch in February.

Following the moderated discussion, the panelists fielded questions from the audience. Several audience members expressed distaste for President Trump’s use of Twitter before and after the election. One audience member challenged Sweet-Cushman’s earlier suggestion that the Electoral College was formed to block candidates like Donald Trump and instead suggested that it protects against candidates like Hillary Clinton.

The speakers shook hands and chatted with audience members for a few minutes following the event. Donald Trump was inaugurated on Jan. 20.