RMU knows how to deal with inclement weather 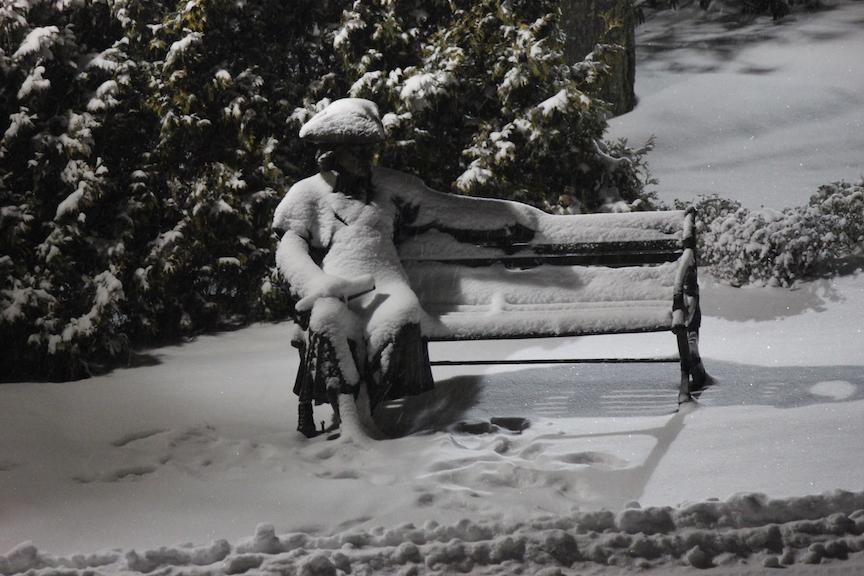 With temperatures declining and snow fall increasing, Facilities Management here at RMU has a lot of ground to cover when it comes to keeping the roads and walkways clear.

Robert Morris University is a very large campus with 3 miles of walkways, 1,200 steps, 5 miles of roadways, 28 parking lots, and 43 buildings with over 200 entrances. As snow falls, it gets more difficult to maneuver around campus easily. Facilities Management is in charge of the removal of snow and the laying of salt to allow students to get to their classes. They would rather the roads be wet during the winter, so vehicles can drive easier than they would on ice or snow.

“What we (Facilities Management) try to typically do here is keep all the main roads wet all the time,” Nathan Bickerstaff, assistant director of grounds said. “With the shuttle buses operating almost 24/7, being only 2-wheel drive, that’s one of the main reasons we keep them open, so students can get around that way as well as the students with vehicles.”

Bickerstaff has been in charge of snow patrol in Facilities Management at RMU for the past 2 years. When there is snowfall, he reports to Ruther Haynam, senior director of maintenance and grounds, every morning at 5 a.m. to inform them of the conditions. In return, Haynam and her boss, Perry Roofner, get the equipment needed for Bickerstaff to clear the grounds.

“Almost as soon as snow starts laying we start to salt,” said Bickerstaff. “Or if we have a report that says we’re going to have freezing rain, we salt before so that we have that ice barrier in there to try to prevent the snow that’s trying to stick.”

The only time they leave the walkways is around the hours of 12 p.m. to 4 p.m. if there is a lot of snowfall because they need to ensure other areas are being taken care of. They start to plow as soon as there is any measurable amount of snow to plow for two reasons. The first being because it is less snow for the ice to melt, and the second being that if students are driving over areas that have already been salted the plow will start to break down the salt and allows it to lower the freezing point of the water.

Facilities Management has a lot equipment to clear the campus of snow with all three departments, Maintenance, Utility, and Environmental Service Technician workers, working together to remove the snow and ice from campus. RMU owns 4 plow trucks, which include salt spreaders, 4 pieces of sidewalk equipment, and there is a rented skid loader used to plow as well. The residence halls of Yorktown and Braddock are worked on by subcontractors in order for Facilities Management to focus their full attention on campus.

“We don’t try to waste material whatsoever,” said Bickerstaff. “It’s a very precious commodity, but the more traction on top of the salt the more melting we get out of it.”

Facilities Management works closely with the RMU Public Safety Department to ensure everyone gets to class on time and without injury. They are both in their offices all day, every day and travel the roadways. Both departments encourage students to be careful during cold weather when snow covers the paths.

“(Students) have to turn around and take some of your own personal safety when you’re walking around in the winter time, of wearing the proper shoes and watching where you walk as opposed to texting while you’re walking around,” said Randy Mink, chief of the RMU public safety department. “And if you see an area that looks icy, don’t continue to walk on it.”

RMU tries very hard to make sure all students make it to classes everyday. There was an alert sent out on Sat., Jan. 23 at 5:33 a.m. to let students know that classes were cancelled.

“The university really prides itself on not shutting down for classes,” Mink said. “Because it is very disruptive for not only students, but the faculty when trying to get students caught up.”

The decision to cancel classes is made when the university decides whether it is safe to drive to campus, because it can be difficult for those who commute. The final decision is made once Bickerstaff, Haynam and Roofner report to their peers on whether there will be a two hour delay, classes will be canceled, or the university will be closed.

For more information on Facilities Management and Public safety, go to www.facilities.rmu.edu.