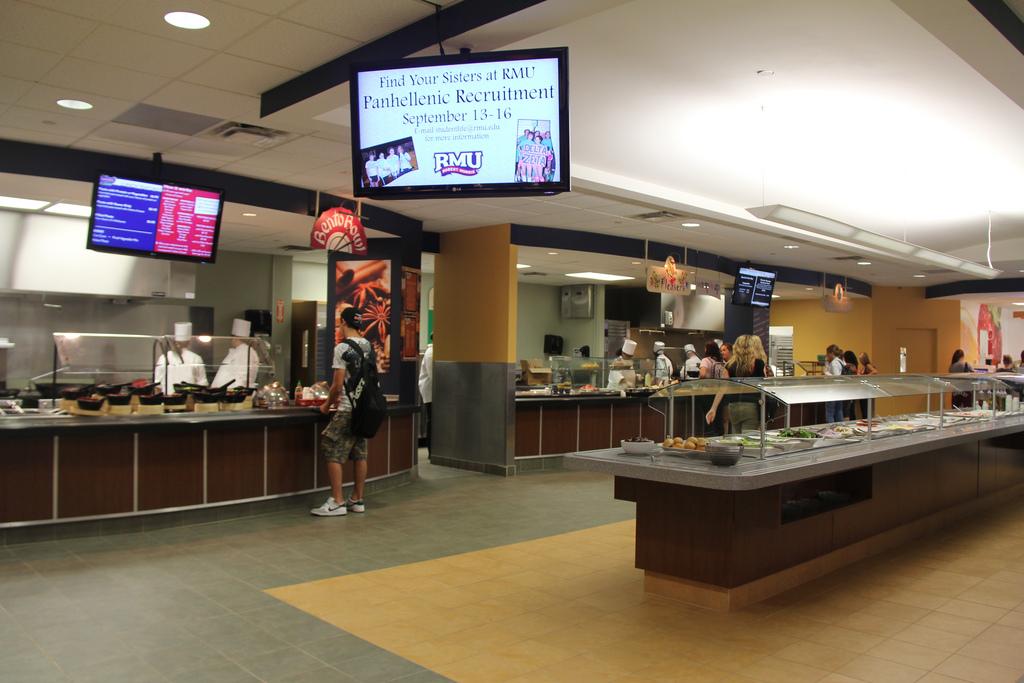 Currently, RMU students are able to select from several different plans that offer a set amount of money that decreases as students buy various meals and other items.

“The big change that is in the works is converting to an ‘all you can eat’ plan and that would apply to PNC Colonial Cafe,” said Potts. “Instead of going in, having declining balance dollars, you would be able to swipe in, any time, as often as you’d like and you’d just get whatever you want to.”

With the new plan putting a new focus on the PNC Cafe, Potts went on to explain that modifications would be made to make the area more available to students.

While the new meal plan introduces the idea of an “all you can eat” method, it would still incorporate the use of declining balance dollars that students currently use.

“Every student, in addition to the all you can eat plan for the PNC Colonial Cafe, will have some declining balance dollars given to them to be used at other dining locations,” said Potts.

Presently, this method of payment would be accepted at locations such as RoMo’s Cafe, The Hale Center Cafe and the Yorktown Cafe.

“Those are the kind of details that we are still finalizing, but you will basically get a total amount that can be used at any of those locations,” said Potts.

In recent years, unspent declining balance dollars would disappear at the end of a semester. This is something that is planned to change with the new meal plan.

“One difference between the declining dollars program in the future and now is that those dollars can be rolled over from the fall into the spring,” said Potts. “They won’t disappear the way they have now.”

While students typically select the amount of declining balance dollars that they wish to have each semester, Potts explained that other factors, such as housing, would influence the amount that students would receive.

“Students who live in Yorktown Hall will get a few more declining balance dollars, recognizing that sometimes it is more convenient for them to eat there than to come over to the PNC Colonial Cafe,” said Potts.

The modifications to the meal plan were the response to comments and recommendations made by Robert Morris students.

“We wanted to see how we could provide more value to students and also take into account some of the feedback we’ve gotten over the years, both formally and informal from students about the dining plan,” said Potts. “All you can eat has been something that a lot of students have talked about, being able to carry over declining balance dollars, certainly students have asked for longer hours, extended hours at the PNC Colonial Cafe, having more options particularly on weekends and late at night.”

Despite this, a petition against the changes was created after students heard the details of the new plans that emerged on Wednesday night.

In response to the petition, students are encouraged to hear more about the plan through a meeting that will take place on Feb. 5 at 9:00 p.m. in Hopwood Hall.

“We want students to hear all the details,” said Potts. “We are going to provide more information at this meeting on Wednesday, certainly as we get closer to room selection, there is going to be complete information including costs, all the logistics about the dining plan next year.”

Potts also mentioned that the plan could result in students saving money and that there are resources to help those who may not.

“Another thing to keep in mind is that Student Life will work with students to help them find the most affordable housing options for them,” said Potts. “Certainly, there are going to be some students, a lot of students, who are going to pay less than they pay now. There are some students who may pay more and what we are going to do to help offset that is those students will receive some more declining balance dollars.”

Further details regarding the new meal plan will be discussed at the meeting held on Wednesday.