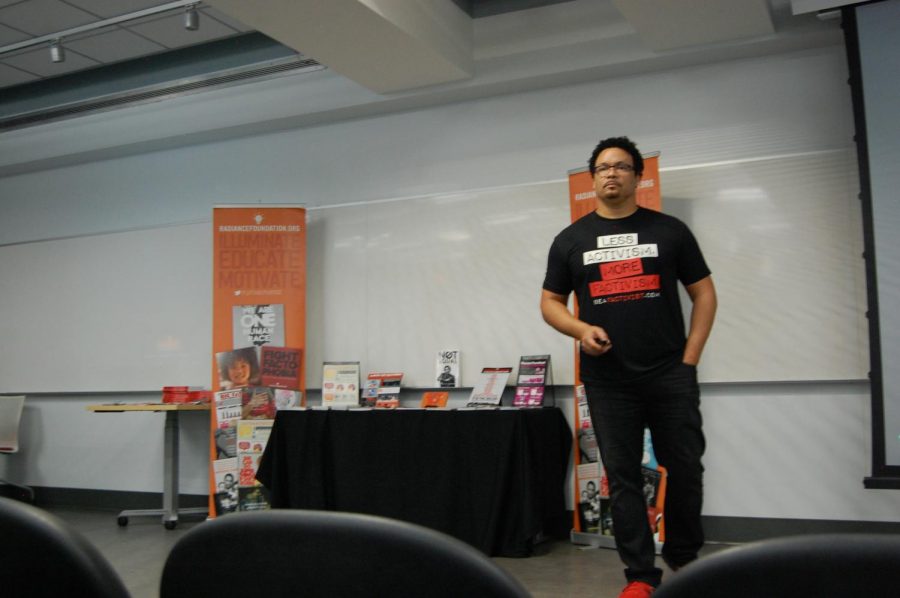 Sued by the NAACP and denounced by Planned Parenthood, Bomberger voiced his strong opinions to students on Feb. 7.

The Radiance Foundation , created in 2009, is a non-profit pro-life campaign. Through this campaign, Bomberger has voiced his concerns with abortion practices and how they affect minority communities.

“We picked Ryan because he had a unique identity, a unique story he could bring to the table in terms of how Planned Parenthood targets the minority population, their origins and their original intentions,” said Cerankosky.

Conceived after his biological mother was raped, and later adopted into a Christian family of fifteen, Bomberger is passionate about protecting the “unwanted,” especially the 1 percent conceived from rape.

“But what are (Planned Parenthood) doing about those who are truly victims?” Bomberger asks. “When you look at their website for the past 15 years, there were no resources for those who experienced rape … they commit the abortion and put the young girl back into the dangerous situation, because (to them) abortion is more important to protect than the actual victim.”

As a self-proclaimed “factivist,” Bomberger emphasizes the power of putting ideas into context. According to Bomberger, factual information, rather than emotional activism, is the best way to get the message across.

“I’m a factivist,” he said. “I’m passionate about putting things into context, because when things are in context, we have clarity.”

For Students For Life member Victoria Yeany, his strong pro-life stance related to her views.

“In my mind, it’s similar to murder, essentially,” said Yeany. “The solution to poverty and not being able to take care of children isn’t abortion. There are other ways we can help.”

For other students, Bomberger’s views on the topic of race relations and abortion do not match up.

“Saying that (abortion) is targeted at the black community is a very powerful and racially charged statement which has degrading effects to it,” said Simon Frey, a Robert Morris University freshman. “Abortion is and should always remain legal, if people don’t want to have a child, it is their own prerogative and should be treated as such.”

With both agreement and disagreement to his opinions, Bomberger continues to denounce Planned Parenthood’s pro choice stance.

“(Planned Parenthood) kills hundreds and thousands of black babies, white babies and everything in between,” he said.

For more information on his campaign, visit The Radiance Foundation and the Too Many Aborted website.