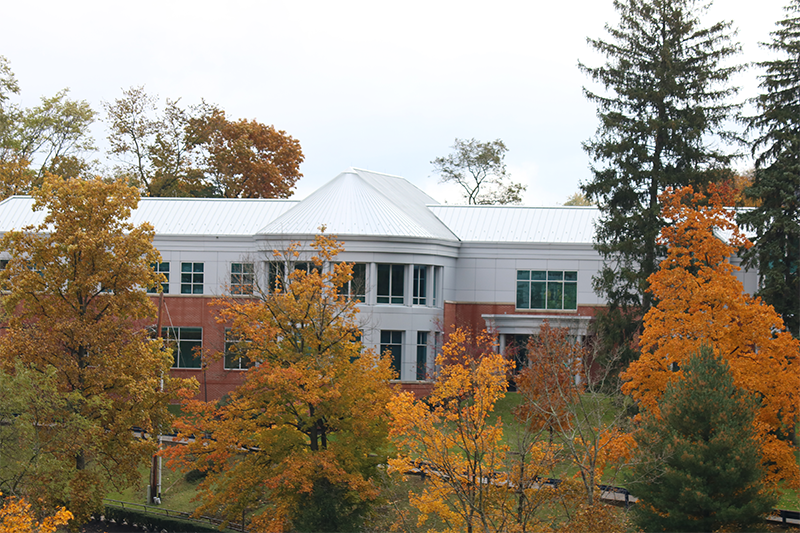 Robert Morris University looks beautiful in autumn as the leaves change. A picture of the business building on the campus of RMU.

MOON TOWNSHIP — Robert Morris University will remain online for summer classes and is uncertain, but optimistic, for in-person fall classes. While handling an estimated $10 million loss as a result of COVID-19, the university is also preparing for an online and rescheduled in-person commencement ceremony.

During a virtual Alumni Town Hall meeting, President Chris Howard provided Robert Morris alumni with updates on the university’s current status and answered several questions that were submitted online beforehand. One of the questions asked for details on the intentions of face-to-face classes.

“As disappointing as it has been to be off-campus this semester, we have learned that RMU goes wherever its students, its faculty, staff and alumni go and that the Colonial nation is stronger as a result,” said Howard.

Howard first addressed the university’s decision on in-person classes set to take place during the summer.

“In the commonwealth, we are in the red phase,” said Howard. “So that has led us to make, as a leadership team, the challenging, difficult decision, but the appropriate one, to not have any on-ground courses during the summer.”

He then elaborated on whether students could expect a return to campus during the fall semester.

“In terms of the fall, we haven’t taken a decision just yet. We are in the planning phase just like other universities and colleges across the country,” said Howard.

While RMU is yet to make a final decision as to how the fall semester will be executed, the hopes seem to be that students will be able to return.

“If you asked me two or three weeks ago, the sense was that universities were pretty gun shy about coming back in the fall for various reasons,” said Howard. “In the last ten days or so, there’s been a kind of a mindset shift which just says, ‘We have to be open in the fall in some incarnation.’”

Howard explained that one of the main reasons to bring students back to campus in the fall comes from an educational perspective.

“Online is great, but we are meant to deliver our pedagogy in person in a way that we want to continue in the fall, obviously following protocols and safety from CDC and all those kinds of mechanisms.”

He also went on to mention that this potential goal is backed by financial and economic reasoning.

“From the economic standpoint from this country, this is a 600 billion dollar industry that really underpins America’s financial situation,” said Howard. “We have to figure out a way to get this done and Robert Morris has several courses of action we’re working through.”

He went on to mention that a preliminary plan is expected to be released soon, containing the specific details about the 2020 Fall Semester.

While focusing on forming a plan for the fall semester that satisfies financial needs, RMU will also be recovering from financial losses that came along with COVID-19.

“From a financial standpoint, we did take a hit and I have been using numbers around $10 million, for now, to kind of gauge that,” said President Howard.

According to information provided during the meeting, the loss of summer tuition money, as well as profits made from the university’s hockey program and arena, played a role in the estimated $10 million loss.

Howard went on to explain that some money had been saved.

“Some of those dollars have been recouped through the CARES Act, through the federal government and I commend the administration and our congress on coming through with that support,” said Howard. “We’re going to be okay, but it is going to be tight, but we feel like we have a good plan.”

“It’s funny how we piece things together. We have an ensemble doing the national anthem from isolation in quarantine. We have social distanced provosts and president and board member delivering remarks, we have a lot of great names being readout,” said Howard.

The online commencement is set to take place on May 9 at 9 a.m. Howard mentioned that all students are welcome to attend and a link will be sent out allowing the campus community to join the event.

Following this, he touched base on the planning of a rescheduled in-person commencement ceremony.

“We are also going to do, or we are committed to doing, an in-person commencement as well. Our students, our graduates, they were adamant that they wanted to have that and I’m excited about doing it,” said Howard.

A date has not yet been set for the event, but guidelines set by Pennsylvania Governor Tom Wolf as well as the Center for Disease Control and Prevention will impact that decision.

“I hope that, probably in late fall, we would do something following all the appropriate physical distancing protocols and criteria.”

RMU will not be the only party working to adjust to a market and workforce damaged by the coronavirus. Members of the class of 2020 or any RMU alumni who have lost their job during the pandemic are encouraged to reach out to Kishma DeCastro-Sallis, the director of RMU’s Career and Professional Development Center as well as Senior Vice President for Corporate Relations and Strategic Initiatives, Derya Jacobs. The two are finalizing a plan to help alumni struggling to find careers at this time.

“We are also talking to the academic program in terms of what else can we offer for our graduates that are stepping into what’s probably going to be a tougher job market than it was, say twelve, twenty-four months ago,” said Howard.

A conversation on how alumni from the campus could help ease the financial situation by helping to increase admission to the school was also held. Alumni were encouraged to tell people that they are from Robert Morris, to buy merchandise, to encourage people who are interested in attending to do so and to interview people from the university if able to. He also mentioned the ability to donate to Robert Morris.

“There’s a lot of schools, well, with a fair amount more dollars and we’re competing against them, so any donations you give are well received and that we know and we tell you where every penny goes and we use it very effectively and I’m very, very proud of that,” said Howard.