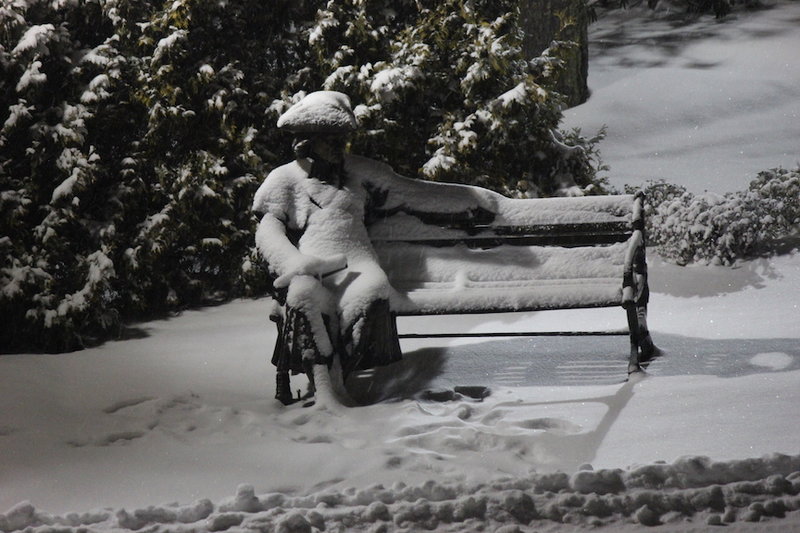 As we get deeper into the spring semester and the weather worsens, Robert Morris University’s Facilities Management cracks down on keeping the campus as safe as possible for students, faculty and staff.

“Being in Western Pennsylvania, especially up on the hill that we’re on..things can be tricky,” said Nathan Bickerstaff, assistant director of grounds. “So what we try to do at Robert Morris is keep any accumulation to a minimum.”

During the winter months, RMU Facilities Management focuses on keeping campus safe and clear. In result of snowfall or precipitation, Bickerstaff reports conditions to Ruth Haynam, senior director of maintenance and operations who then moves conditions onto the office of the provost.

With that, Bickerstaff gathers all his sources to clear RMU grounds. From there, the head of facilities and the provost’s office talk strategy to decide cancellations, delays and early leaves all based on the upcoming weather forecasts and ground temperatures, said Bickerstaff.

“RMU manages all snow removal at three of our sites, the Island Sports Center, Yorktown Hall and the obviously Moon campus,” said Bickerstaff. “I use subcontractors to help me at Yorktown and at the Island so we don’t spread our resources too thin on campus.”

Unlike many other institutions, RMU uses trucks with brushes to remove snow from roads on campus and walkways instead of the alternative trucks with plows.

“A brush removes so much more material than what a plow would,” said Bickerstaff about the machinery. “With sidewalks not being even all the time, a plow is just straight blade. It can’t go below or above grade so with using a brush, being somewhat flexible it pushes that minuscule amount of snow that is left off and it just provides a better clearing of the walk.”

According to Bickerstaff, weather precautions are always taken, usually in the form of salting.

“We don’t try to waste salt,” said Bickerstaff about the salt seen around campus during last week’s fifty-degree weather wave. “There are times where we will salt above 32 degrees but the ground temperature is much colder.”

Facilities and maintenance do their best to eliminate ice for possible slipping. Although he admits it’s a bit of a hassle to quickly remove any snow from campus when vehicles are here and moving throughout campus, they do their best to keep the accumulation to a minimum.

“A slip and a fall is something that nobody wants,” said Bickerstaff.

RMU students are often notified via student email of any weather precautions, delays or cancelations by the university’s RMU Alert. The alert system also applies incase of an emergency.

Although the university has yet to distribute a cancellation email of sorts due to weather this academic year, Facilities Management is always prepared.