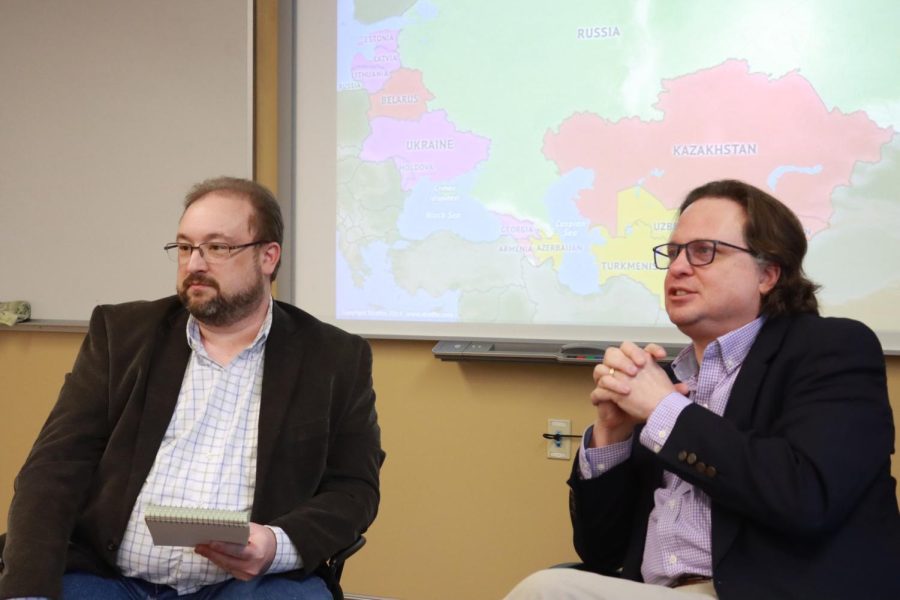 Dr. Soren Fanning (Left) and Dr. Anthony Moretti (Right) hosted a roundtable discussion on the conflict between Russia and Ukraine.

On Tuesday, the Robert Morris honors program along with Dr. Anthony Moretti and Dr. Soren Fanning hosted a roundtable discussion on Russia’s invasion of Ukraine “After Ukraine: The Second Cold War”.

Students and some faculty were on hand for the event to learn more about the situation going on in Europe and see how impactful this conflict can be between the two countries.

Fanning explained why he and Moretti decided to have this roundtable discussion on this topic,

“This is one of the most destabilizing international events since the US invasion of Iraq. We knew this was going to completely reorder international affairs and you can feel an era coming to a close.”

The pair have hosted several different roundtable discussions prior to this one but Moretti explained why this particular roundtable stands out in his mind,

“Very rarely have we done one of these where there was something that was happening right now. One of the maps that Soren [Fanning] put together that information took place this morning. That’s not going to happen in a particular roundtable. So what makes this one special to us is that it is one of those rare opportunities that we can have a conversation about something that is taking place right now.”

To begin the roundtable, Fanning started off the conversation by explaining how the United States has been involved in the second cold war but not with the Russian federation but with Vladamir Putin.

Back in the first cold war occurred with the USSR was more based on hard power. But this second cold war is more based on soft power. When discussing soft power Moretti described how social media has changed how this cold war has formed.

He described how social media was the driving force in this war and it wasn’t necessarily all fought in hard power because when Russia first invaded the country they won the weapon battle but Ukraine won the information battle which in the end is helping them in their defense of their country.

After their introduction of the second cold war, the pair opened up the discussion to questions.

There was a wide range of questions hitting on many different key topics involving why Russia invaded Ukraine, the reason why Russia waited until 2022 to invade Ukraine, the recent comments made by Tesla CEO Elon Musk.

Over the past several weeks millions of Ukrainians have fled the country, Fanning explained where all of those people are headed and the outcome that these civilians face.

“95 percent of the people who fled are women and children.” Fanning said, “Ukrainian law made it illegal for men from the ages of 18-60 to leave the country. They needed everyone to fight. The vast majority of the population are fleeing to the western portion of the country. If people can get there it is no means far enough away from the Russian air force but it takes them away from the front lines.”

As the roundtable concluded Fanning wanted students at ease and not to panic about the situation involving Russia and Ukraine,

“Everyone is a ball of anxiety these days between the pandemic and inflation and everything and everyone is so balled up. Then throw in a war with a nuclear-run country that could reach a snapping point.”