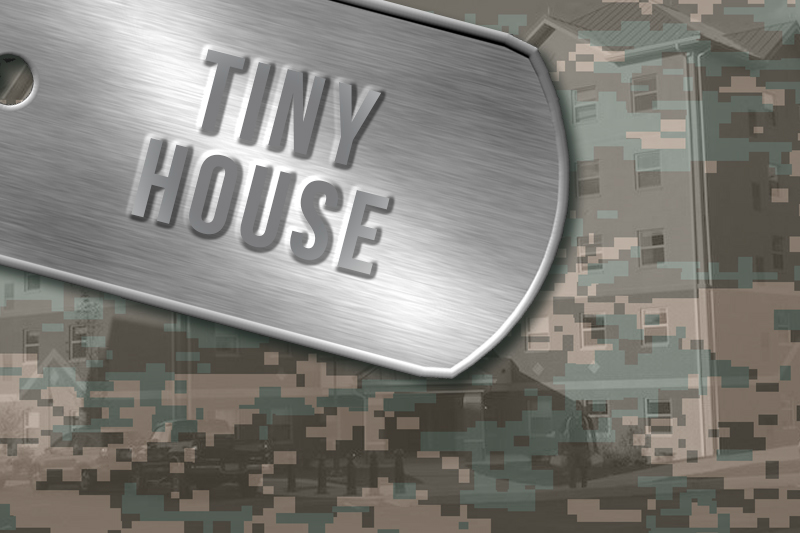 The construction is called the Minimus Tiny Home project, and the student team consists of senior Dale Miller, junior Mary Funderlich and graduate student Fauzan Wassil of CMU’s School of Architecture. Faculty advisers include RMU’s Marcel Minutolo, a business professor with a doctorate in strategy, and CMU’s Azizan Aziz, who has a certification in sustainable building. Graduate students at CMU originally designed the village’s architecture.

“As a social enterprise business, the business model that the team has put together has the potential to both do good and make money,” Minutolo wrote in an email interview, adding that he himself served in the military. “I have seen first-hand how difficult it can be to transition from military to civilian life and want to help others make the transition to the extent that I can.”

The construction site was blocked off on April 15. Upon completion, the students will donate the tiny home to the Veteran’s Place of Washington Boulevard, where it will become the first of 22 homes in the upcoming Tiny Home Village. The village, dedicated to veterans, will be constructed in Penn Hills.

Funderlich began working on the project after it was conceived in Minutolo’s Honors course, Current Topics in Sustainability. Honors Program co-director, Philip Harold, invited honors students to join the team.

“For me, I think I was just at the right place at the right time,” Funderlich wrote in an email interview. “Dr. Harold sent out an email asking honors students if they wanted to be involved in building a tiny home, and I happened to respond first. I later teamed up with Dale because he was writing about tiny homes for his thesis.”

Funderlich said that she feels excited to contribute to the tiny home movement, but she also feels nervous.

“I love tiny homes so much so it is a dream come true to build one, but I have never done it before so it is nerve racking,” Funderlich said. She has already sent out a recruitment email, and plans to send out more volunteer information after she and the team finish “assessing the build.”