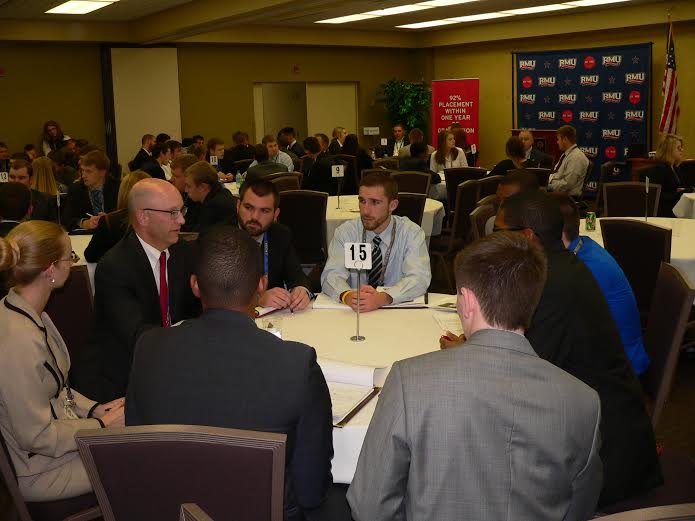 When Danny Bonaventura returned to Robert Morris for the annual Sport Management Student Conference, the 2013 graduate was able to reconnect with his peers.

Though, he not only caught up with former classmates, but also shared career insights with them as well.

“It’s incredible for me to be able to comeback, see all the students and know that I was right in that position,” said Bonaventura, a Rampage Sales Representative for Spurs Sports & Entertainment in San Antonio, Texas. “I want to do everything I can to help those students get into a position like the one I’m in right now. … I’m just starting out my career so I can still learn a lot from all these students as well.”

After the formation of RMU’s Sport Management Advisory Board in 2004, Vic Gregovits asked Department Head David Synowka what the panel should be tasked with.

As a result, Synowka and the four initial members came up with the idea to hold a career symposium for the major.

During its first year, roughly 80 students attended. However in 2014, that number was doubled.

“From a standpoint, what’s really boggled my mind is the amount of schools. The number of schools has grown to 18 now and that is a testament to the program,” said Gregovits, an RMU alum and founder of VSG $ports Marketing. “The placement numbers, even in the last three years, have been incredible. We’re just over 50 folks that we know of who have gotten their first start in the industry, whether it be an internship or their first real job [from the conference].”

Since the reputation of the event at a grassroots level has grown because of word of mouth, students from institutions across the country, such as Ball State, Cal State at Los Angeles and Seton Hall were represented.

California University of Pennsylvania junior David Casey was able to network with an individual whom he hopes can help him acquire an internship.

“I’m considering going into ticket sales for either the NBA or NFL and a person I met at Mount Union I’d actually seen again here today, Kirk Madsen, who works for Monumental Sports & Entertainment,” he said. “He told me if there’s anything I need, let him know, so probably around internship time I’m going to send him my resume.”

Despite the fact that the majority of attendees were upperclassmen, there were some first-year students present.

“Since I’m a freshman, I have more time than most people here who are juniors and seniors so I think it’s a better advantage to come when you’re in a lower level of school because you’re getting that first experience with professionals … and you get to know what you need to do right starting out from the gate,” said Cal U’s Joshua Wood.

For Synowka, seeing former students who are now professionals in the industry come back to speak at the conference means a lot.

“…That’s been our mission with the advisory board in the sport management department is that we are student-centered, we are student-focused,” he said. “We’re in a very competitive, highly visible industry and by developing our students, our benefit is going to be that we’re going to establish a strong brand reputation as the program of choice for sports business, sport management and sports communications.”